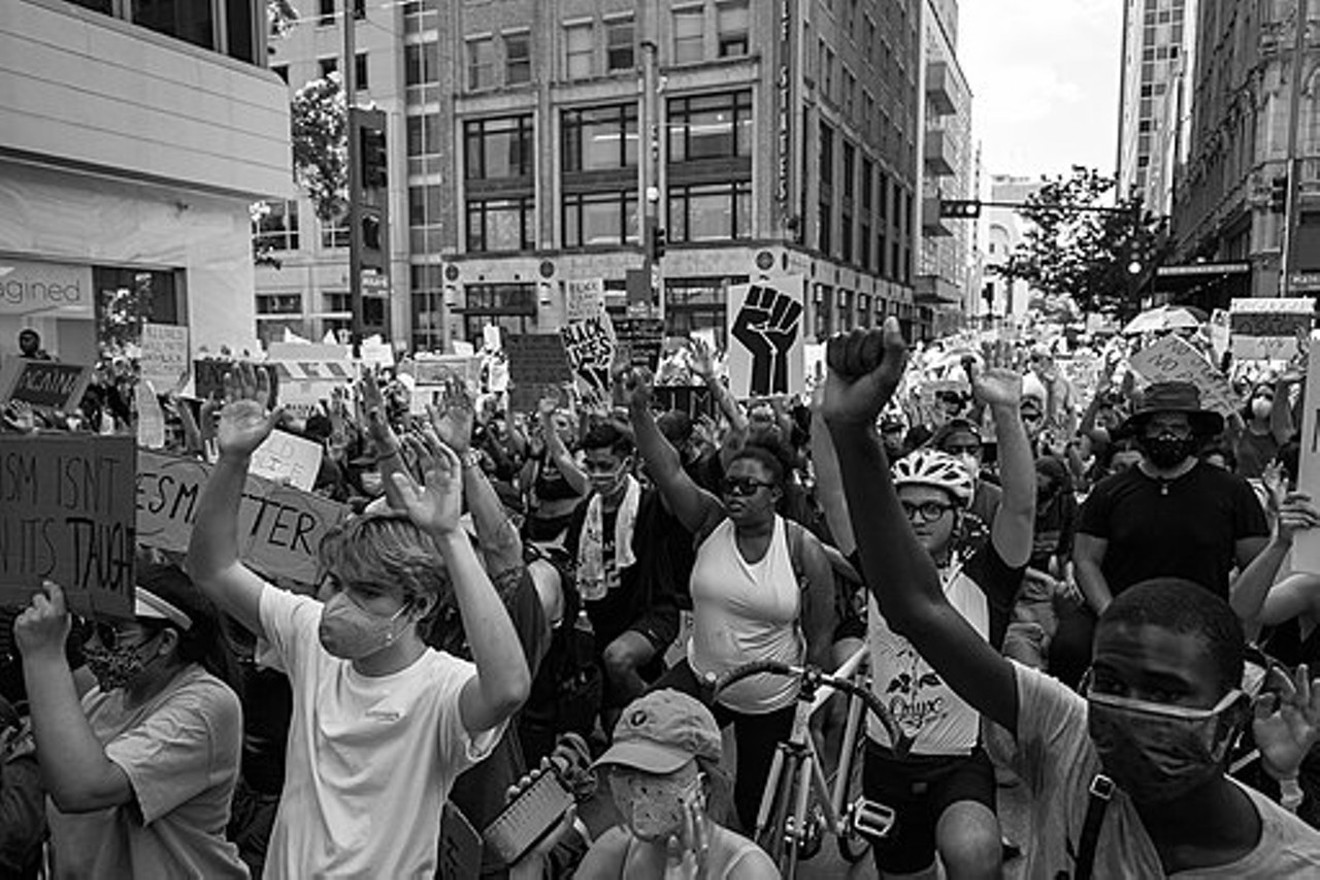 Republican State Rep. Brooks Landgraf introduced the bill, HB 2461, on Monday, saying it would both “protect” First Amendment rights and crack down on “rioters,” according to a news release.

Landgraf represents the state's District 81, which includes Ector, Andrews, Ward and Winkler counties, located in the western part of Texas.

“HB 2461 will protect the ability of Texans to exercise their constitutional rights by properly punishing those who seek to take advantage of peaceful protests through violence, looting and intimidation,” Landgraf said.

The bill would make it harder for people accused of participating in a riot to get bond and enhance the penalties for certain crimes committed throughout the course of a riot.

Landgraf’s press release mentioned “widespread reports” of individuals traveling to Texas from other states with the aim of “inciting violence and looting.”

Abbott threw his weight behind the bill, saying that “anyone who participates in violent riots should be held accountable for their actions.”

Describing Texas as a “law-and-order state,” Abbott said, “This legislation will help ensure that alleged rioters from out of state face the same standards of justice as those who call Texas home.”

The text of the bill makes no mention of out-of-state protesters or rioters, however.

Brian Klosterboer, a staff attorney for the ACLU of Texas, described the bill as worrisome, citing several parts of the legislation’s text as potentially having a “chilling effect” on peaceful demonstrators.

"On the one hand, it would make it harder for people accused of being in a riot to get a personal bond, putting them in the same category as capital murder and human trafficking in terms of personal bond,” Klosterboer said.

“It also gives the police broad discretion to arrest people who they think are participating in a riot." - Brian Klosterboer, ACLU of Texas

“It also gives the police broad discretion to arrest people who they think are participating in a riot,” he said, and “bills like this one would make it easier for police to crack down and silence protesters” while also opening the door for “guilt by association.”

Last summer, protests erupted around the country after a Minneapolis police officer killed George Floyd, an unarmed Black man. Throughout the first two weeks of unrest, police arrested more than 10,000 people nationwide, according to an Associated Press tally.

In Texas, demonstrations broke out in Austin, Dallas, Fort Worth, Houston and San Antonio, among other cities. In one instance, Dallas police herded and arrested more than 600 protesters and bystanders, although the police chief later decided to not pursue charges.

Landgraf’s anti-riot bill would “make the penalties even harsher after we saw the largest protests in our country's history last summer, and the largest in Texas history, which were by and large incredibly peaceful,” the ACLU’s Klosterboer added.

Across the U.S., bills and laws that directly or indirectly squeeze First Amendment rights – protesting and other forms of free expression, for instance – have become increasingly common in recent years.

Since November 2016, the International Center for Not-for-Profit Law, or ICNL, has tracked anti-protest bills around the country, both on the state and federal levels. At least 45 state legislatures have introduced a total of 202 such bills; 26 have passed.

Texas state lawmakers have considered four anti-protest laws since July 2017. Three bills died in the Legislature or were defeated, but what they proposed worried critics and watchdogs.

Republican state Rep. Pat Fallon first proposed a bill that would have eliminated civil liability for drivers who hit protesters with their vehicle. That bill died in the Legislature in August 2017 a few days after neo-Nazi James Alex Fields drove his car into a crowd of anti-racist protesters in Charlottesville, Virginia, injuring dozens and killing 32-year-old activist Heather Heyer.

Introduced in March 2019, HB 2100 would have required universities and college campuses to impose disciplinary sanctions on peaceful protesters who “interfere with the rights of others to engage in, observe, or listen to expressive activities on campus.” Similarly, it never became law.

Another unsuccessful bill proposed new penalties for those who participate in protests around “critical infrastructure” such as pipelines.

But a second iteration of that bill eventually became law, now allowing for harsh criminal and civil penalties for protesters who rally near pipelines or pipeline construction sites, for instance.
KEEP THE DALLAS OBSERVER FREE... Since we started the Dallas Observer, it has been defined as the free, independent voice of Dallas, and we'd like to keep it that way. With local media under siege, it's more important than ever for us to rally support behind funding our local journalism. You can help by participating in our "I Support" program, allowing us to keep offering readers access to our incisive coverage of local news, food and culture with no paywalls.
Make a one-time donation today for as little as $1.