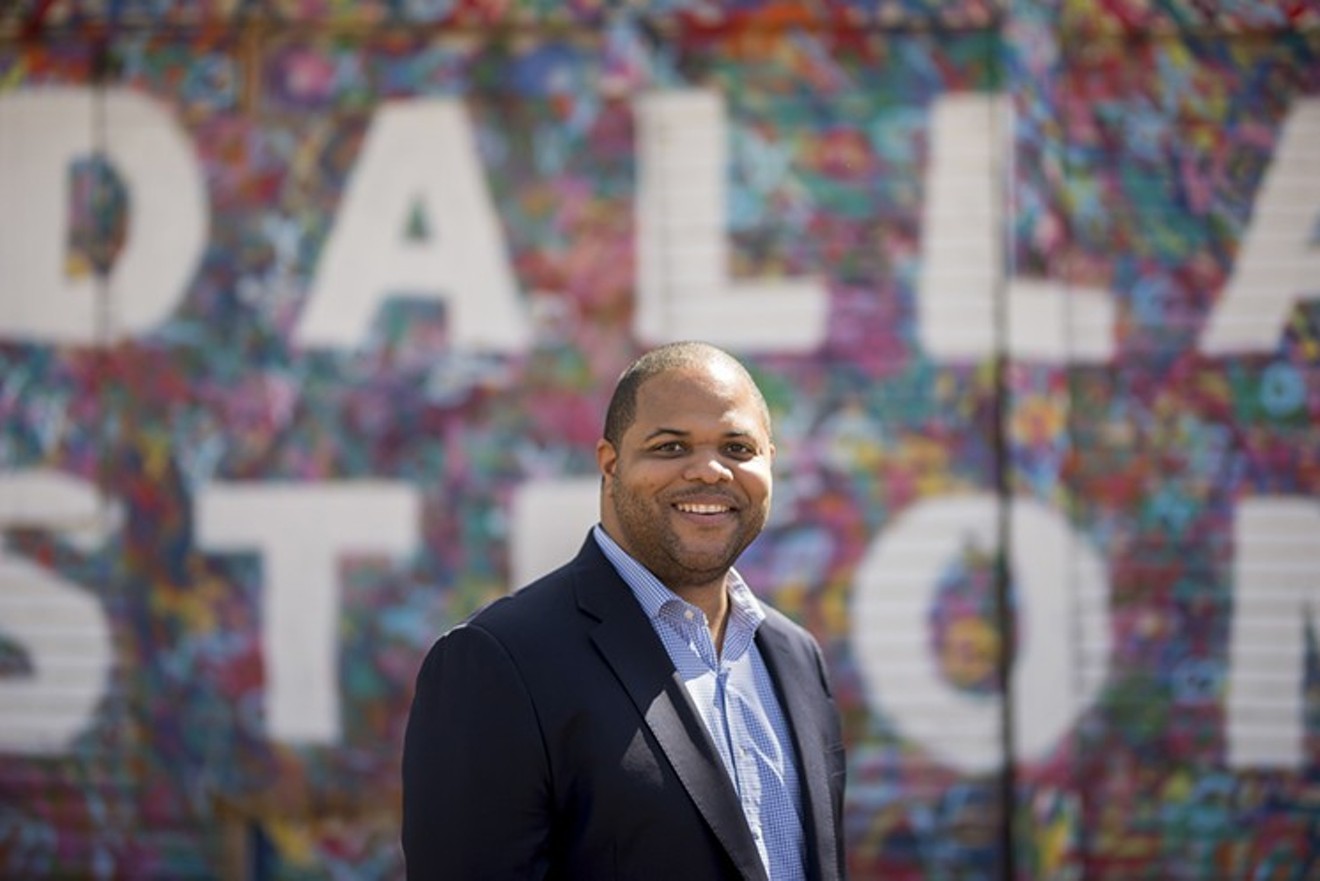 A who's who of Dallas' conservative business elite has made its presence known in Dallas' mayoral race, throwing its considerable fundraising weight behind Eric Johnson. We'll give you a minute to catch up from the cognitive dissonance.

Johnson is a progressive, Democratic Texas House representative from West Dallas. He's made his bones championing civil rights causes, whether it was his successful recent fight to have a lost-cause celebrating Confederate plaque removed from the Texas Capitol or his innovative, but failed, 2017 effort to shield his constituents from the effects of gentrification. Johnson is a rising star in liberal Texas circles, not the kind of guy you'd expect to be on the receiving end of this kind of love from the likes of Hunt Oil scion Ray Hunt.

"The race is short," a letter pitching Johnson to potential donors reads. "Eric has a strong voter base cultivated over the past ten years, which will certainly help him in his bid to become the next Mayor of Dallas. However, there is likely to be a runoff and the sooner we can get financing in place for Eric, the better." 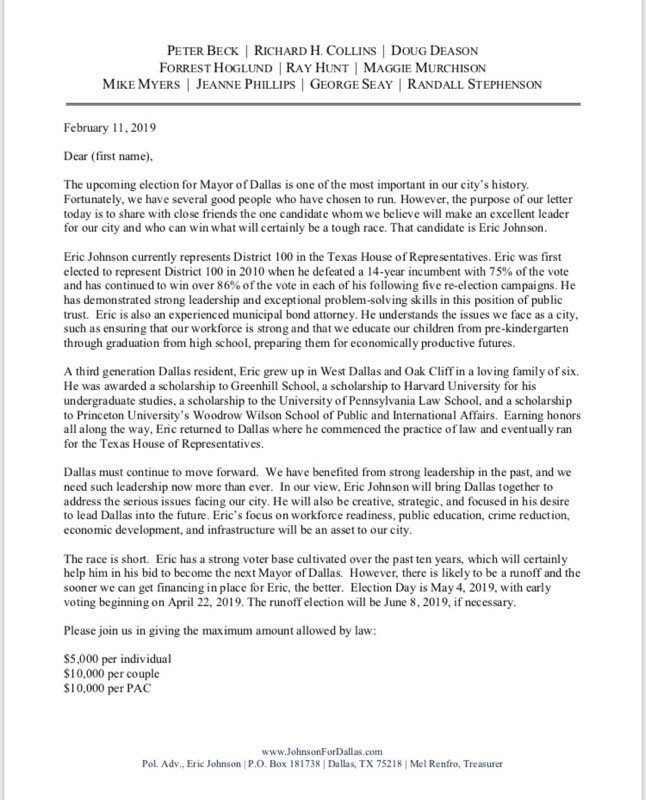 Eric Johnson's fundraising letter
Johnson for Dallas
In addition to Hunt — a longtime major donor to Republican candidates like George W. Bush and his brother, Jeb — the letter is signed by Jeanne Phillips, ambassador to the Organisation for Economic Co-operation and Development in Paris under George W. Bush and current senior vice president of corporate affairs and international relations for Hunt Consolidated; oil and gas man Forrest Hoglund; and Beck group CEO Peter Beck, among others.

Johnson's backers would be the usual suspects if he was, say, the former CEO of Pizza Hut, like Mayor Mike Rawlings, or the Turner Corporation, like Leppert. Their support comes as a surprise, though, for someone like Johnson, who is an attorney at one of the United States' biggest municipal bond law firms, Orrick, Herrington and Sutcliffe, but is by no means a titan of industry.

In response to questions from the Observer about being backed by prominent conservative donors after serving in the Texas House as a progressive Democrat, Johnson touted his ability to partner with people of all political stripes.

“I’m proud of the support I’ve gotten from across Dallas communities, including from prominent business leaders. As mayor, I’ll seek to represent everyone, just as I’ve done for a decade in the state Legislature," Johnson said. "Throughout my career, I’ve worked across the aisle and across communities to develop creative solutions to the issues facing Dallas — from the lack of affordable housing to access to high-quality, full-day pre-K. What I’ve found is that we’re best able to find real solutions when we hear from those representing all walks of life.”

Former Republican state Rep. Jason Villalba, the only other candidate in the mayoral race to have been elected to state office, expressed disappointment that donors who share his politics are backing Johnson instead.

"I understand that these are different times with different politics and people have different motivations," Villalba said. "It's clear to me that the Citizens Council and business organizations believe that Eric is their best chance to beat somebody that they might not appreciate [as mayor]."

"The Dallas Establishment has decided who they’re backing in the Mayor’s race, and predictably, he is the last candidate I would vote for," Denson's post said. "This race is Scott Griggs versus everyone else. Some of the other candidates are good people but only Scott has the chops to prevent the DCC from paving over everything and selling us out in the name of regionalism."
KEEP THE DALLAS OBSERVER FREE... Since we started the Dallas Observer, it has been defined as the free, independent voice of Dallas, and we'd like to keep it that way. With local media under siege, it's more important than ever for us to rally support behind funding our local journalism. You can help by participating in our "I Support" program, allowing us to keep offering readers access to our incisive coverage of local news, food and culture with no paywalls.
Make a one-time donation today for as little as $1.