What We Learned From the Cowboys Preseason 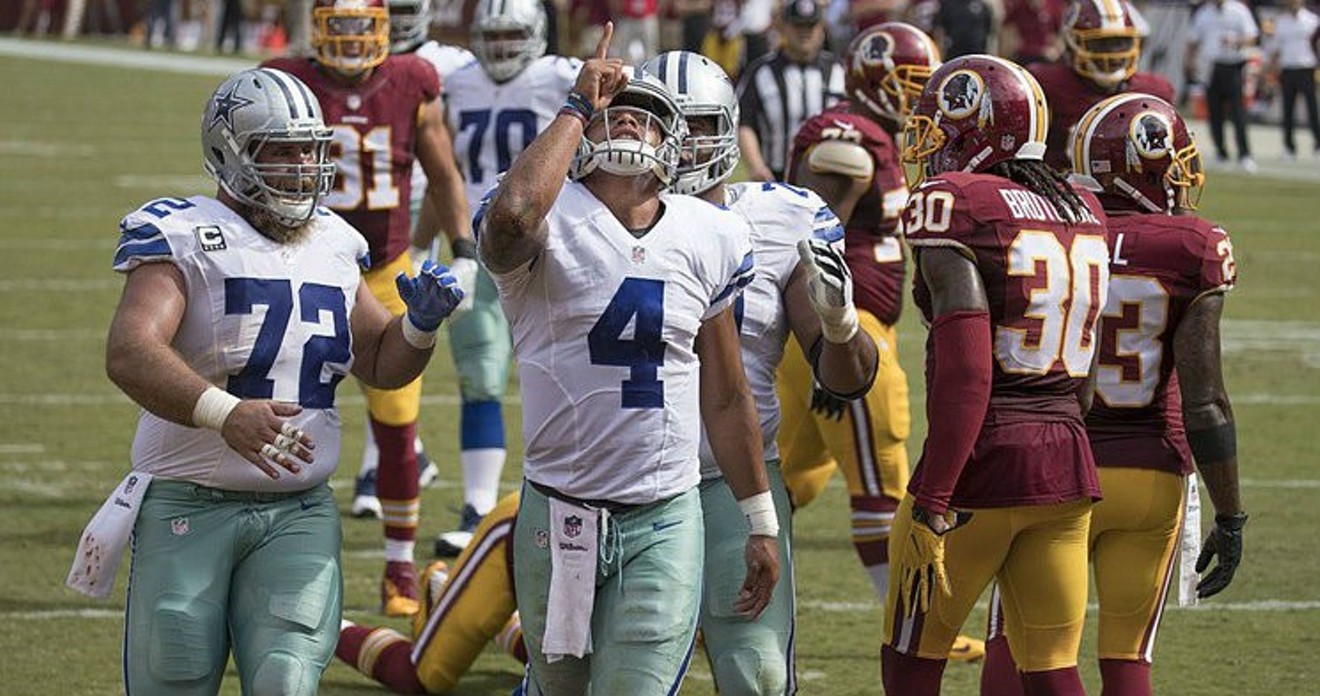 Let's pray with Dak that he stays healthy. Keith Allison
Getting the obvious out of the way first, the NFL should get rid of the preseason or, at the very least, slim it down to one or two games from the four or five each of the league's 32 teams play now. If the league wants to claim it takes injury risks seriously, it's got to get rid of what is, essentially, a meaningless quarter-season played in the grueling heat while players are just trying to work themselves into shape.

That being said, there's still plenty to take away from the Cowboys' time in Oxnard, California, and Frisco this summer. With the team's season opener against the Carolina Panthers five days away, let's take a look at some of what we've learned.

The Cowboys are going to lose any game Dak Prescott doesn't start. — Any time the Cowboys starting quarterback wasn't on the field during the preseason, the unit he leads was unwatchable. Neither Prescott's 2017 backup Cooper Rush, nor 2018 fifth-round draft pick Mike White moved the offense with any regularity.  "Inept" is too kind a word to describe how they looked under center.

While no one would've been excited by the prospect of Rush starting a game in 2017, at least he starred in last year's preseason, completing nearly 75 percent of his passes with six touchdowns against no interceptions. This year, Rush has looked like the undrafted free agent he is, completing 62 percent of his passes while throwing one touchdown pass and four interceptions.

White's been a little better and shown better physical tools than Rush, but he didn't throw for a touchdown during the preseason. He also lacks the running ability the Cowboys need from their quarterback to make sure their offense remains dynamic without Prescott.

With Prescott, the Cowboys offense starts the season as a promising mystery box, thanks to the departures of Dez Bryant and Jason Witten. Without the former Mississippi State star, it's a disaster.

Randy Gregory making some noise now that he's back. This could be a big bonus addition for Dallas: pic.twitter.com/9ZLqAH3b0N


One way or another, Randy Gregory is going to be the missing piece. — After missing the better part of two seasons thanks to multiple failed marijuana tests, Cowboys defensive end Gregory has shown in training camp and limited preseason action that he's capable of being the pass-rushing bookend to All-Pro DeMarcus Lawrence the Cowboys' defense desperately needs. If he plays all 16 games, the team's defensive line has the chance to be an elite unit.

It seems unlikely that he'll play all 16 games, however. Gregory missed the Cowboys' final preseason game Thursday thanks to a mandatory meeting with the NFL's medical director, something he's required to do upon request thanks to the NFL's substance abuse policy. Whether it's because of another meeting to discuss his treatment plan or because he steps on the wrong side of the NFL's thin disciplinary line — something he's done four times now since being drafted in 2015 — Gregory seems to be a good candidate for some forced time off.

Tavon Austin was a steal. — When the Cowboys acquired Tavon Austin from the Los Angeles Rams for a sixth-round draft pick, the idea was that the one-time West Virginia speedster would return kicks and get a few touches out of the backfield in a scatback role. While Austin will definitely do both of those things for the Cowboys this year, he's also proved during the preseason that he's capable of making an impact at wide receiver as well, something the team desperately needs, having dumped Bryant. Austin is just 5-foot-9 but has shown the ability to be productive on the outside. If he continues to do so during the regular season, he'll stretch the field for Ezekiel Elliott.

The Rico dream is dead. — While the Cowboys decided to keep former Baylor basketball star Rico Gathers on the roster as the team's fourth tight end, despite his Friday night arrest for misdemeanor marijuana possession, Gathers' lackluster training camp along with his failure to develop as a blocker ended the dream many Cowboys fans have had of him being a red zone pass-catching destroyer. Gathers may get one more opportunity to prove everybody wrong, but it's just hard to see it at this point.
KEEP THE DALLAS OBSERVER FREE... Since we started the Dallas Observer, it has been defined as the free, independent voice of Dallas, and we'd like to keep it that way. With local media under siege, it's more important than ever for us to rally support behind funding our local journalism. You can help by participating in our "I Support" program, allowing us to keep offering readers access to our incisive coverage of local news, food and culture with no paywalls.
Make a one-time donation today for as little as $1.