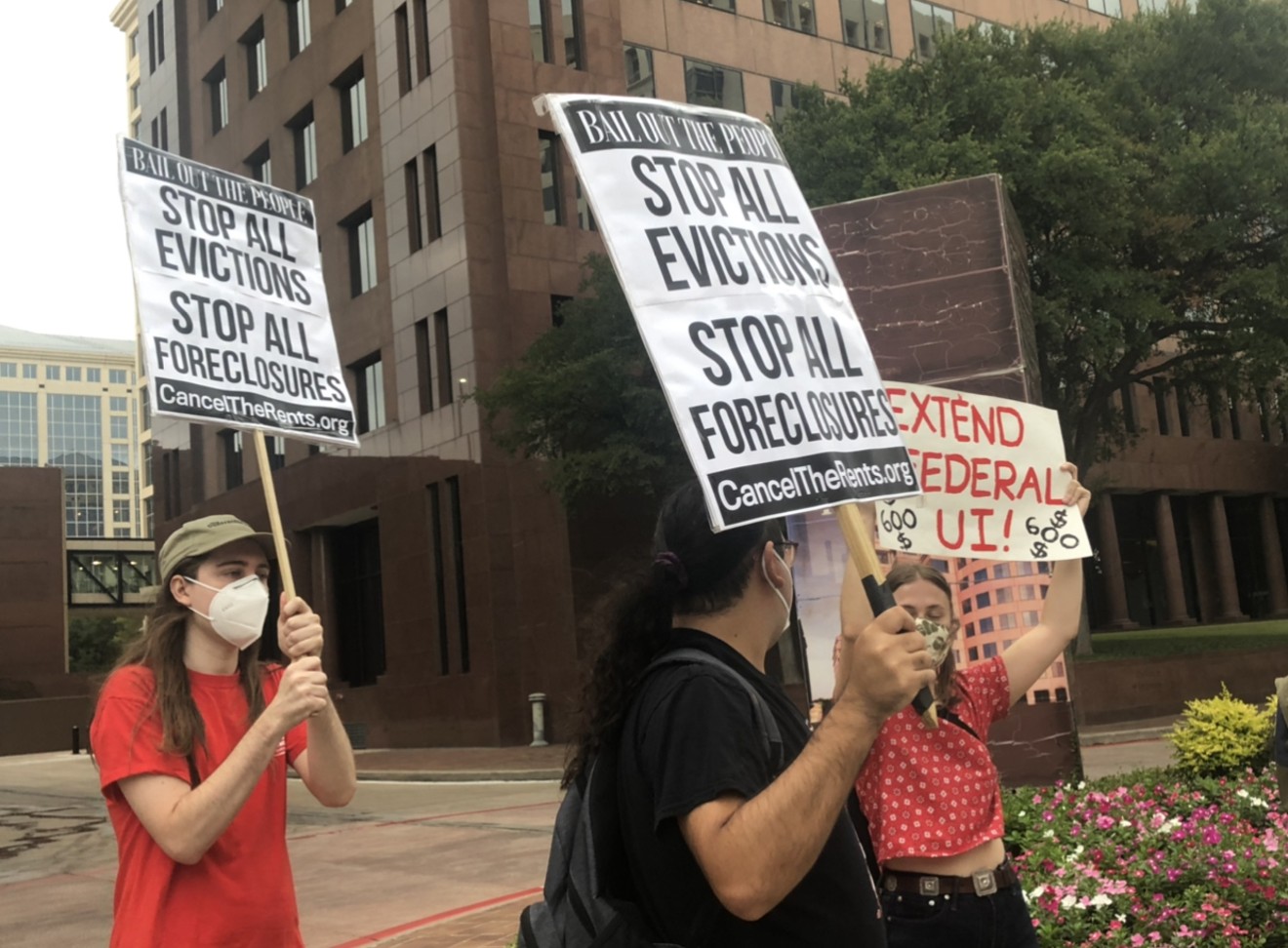 The demonstration, tiny as it was, took place in solidarity with a national day of action for unemployed workers. In cities across the country, workers gathered to demand the $600 unemployment pandemic relief be restored, and foreclosures and evictions paused.

"We're about to fall off this eviction cliff and our government is doing nothing to step in and help," Ivy Vance, an activist with Restaurant Workers United, said.

Vance was laid off from her restaurant job in March. She was eventually able to receive pandemic relief, but in the meantime, she and her partner were living off of one paycheck a month and making ends meet was a stretch. The $600 weekly additional unemployment benefits Congress approved for workers laid off during the pandemic relieved some of the pressure. Those ended in July, though, so they'll have to start stretching their money again.

"We barely made a living wage as restaurant workers before the pandemic." – Ivy Vance, Restaurant Workers United

President Donald Trump's administration began offering an extra $300 in unemployment benefits in lieu of the $600, but the program leaves thousands of unemployed workers out to dry. According to CNBC, the Trump program only gives the extra federal cash to those who get at least $100 a week in state benefits.

Eliza Forsythe, a labor economist and assistant professor at the University of Illinois, told CNBC an estimated 6% of people receiving state unemployment benefits collect less than $100 a week. So, hundreds of thousands of people, out of the millions on unemployment, won't receive the extra $300.

According to The Texas Tribune, the federal government greenlit Texas for its $300 unemployment program Aug. 21. States can give out another $100, but according to the Tribune, Texas does not plan to do so.

Vance said many restaurants are continuing to close down and people don't have jobs to return to. Some of those whose jobs returned are afraid of catching, Vance said. But even those who go back have trouble paying the bills because they're making far less than they did before.

"We barely made a living wage as restaurant workers before the pandemic," Vance said. "If we're only open at 50% capacity, we're just not bringing in as much business. We can't survive."

Marissa Rodriguez, an activist with the Party for Socialism & Liberation, said the protesters were out there to appeal to elected officials like Cornyn to make them realize that even though the federal unemployment benefit ended, people's financial woes caused by the pandemic are not going away.

"People aren't going to just magically have the funds to pay their mortgages and their rents," Rodriguez said.

The U.S. Bureau of Labor Statistics reported that 8% of Texans were unemployed in July. Since mid-March, more than 3.2 million people in the Lone Star State applied for unemployment benefits.

While unemployed workers wait to see if the federal government will provide more relief for them, Rodrguez said, people facing evictions or foreclosures can reach out to organizations like Texas Tenant Union for legal support.

Tuesday's demonstration was put together by the organizations UNITE HERE, Local 23, DSA North Texas Labor Working Group, Restaurant Workers United, YALL DFW, Restaurant Organizing Project and Unemployed Action.
KEEP THE DALLAS OBSERVER FREE... Since we started the Dallas Observer, it has been defined as the free, independent voice of Dallas, and we'd like to keep it that way. With local media under siege, it's more important than ever for us to rally support behind funding our local journalism. You can help by participating in our "I Support" program, allowing us to keep offering readers access to our incisive coverage of local news, food and culture with no paywalls.
Make a one-time donation today for as little as $1.