Cory Youmans Caught MLB's Most Valuable Baseball, Then Caught Flak After Selling It for $1.5 Million 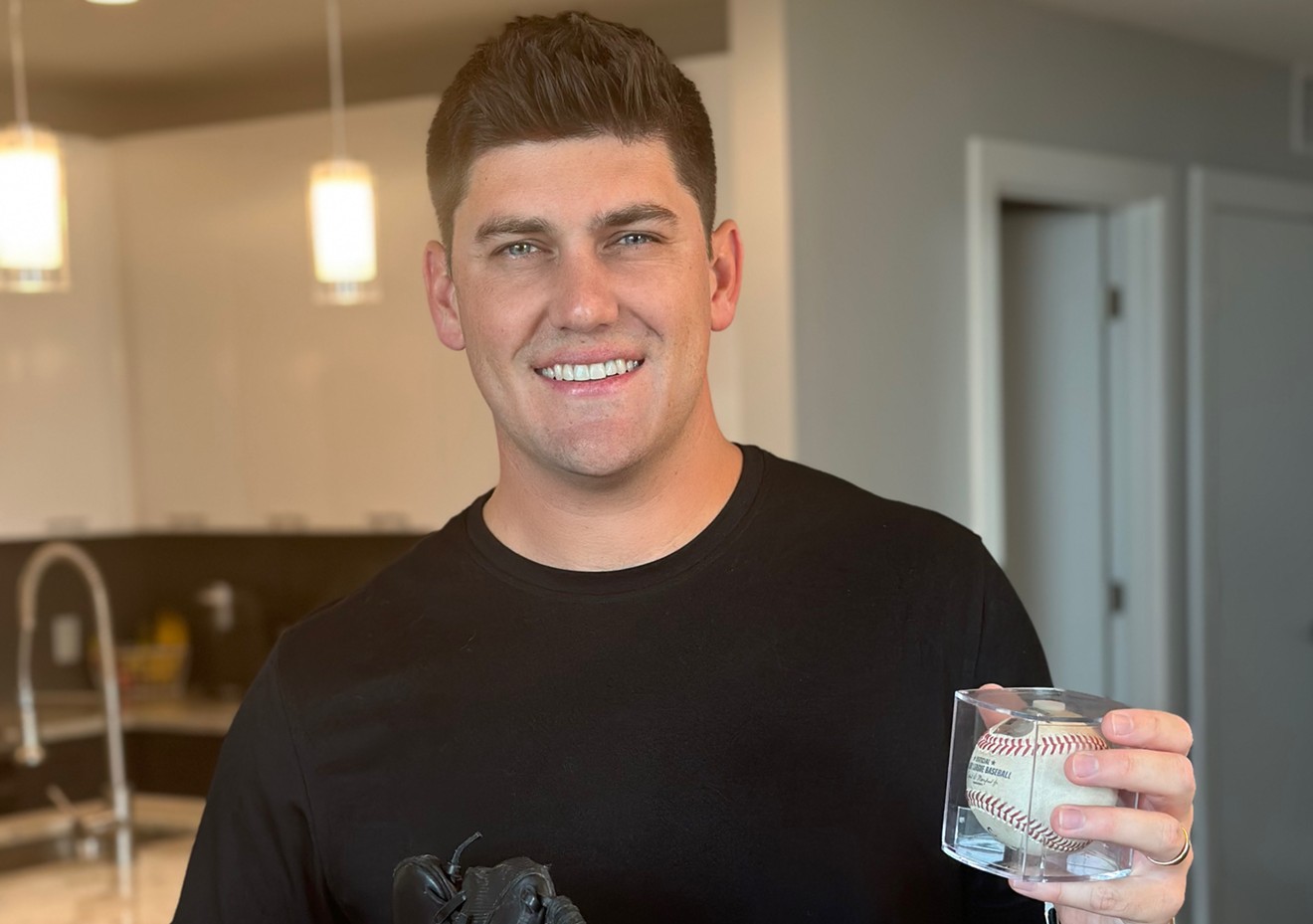 Rangers fan Cory Youmans with the ball Yankees slugger Aaron Judge hit for his 62nd home run at Globe Life Field in October. Courtesy of Cory Youmans
Before he caught the ball, cancer caught him.

Last May, Cory Youmans was just trying to climb the ladder at a Dallas financial services company — one day talking business outlooks, the next to an oncologist.

“When you’re 35 and your doctor says you have cancer, it absolutely changes your life,” Youmans said. “It changed everything, even the way I look at time.”

Doctors diagnosed his cancer early and his prognosis is good for a full and lasting recovery. The alteration of his perspective might be even better.

See the world. No dillydallying. Embrace different cultures. And when a friend offers you tickets to a baseball game, always say “Yes!”

That lucky fella who made the life-changing catch of Aaron Judge’s No. 62 at Arlington’s Globe Life Field? Sure enough, the cancer survivor.

Little did Youmans realize that dealing with melanoma would be less unnerving than becoming a millionaire.


On the night of Oct. 4, Youmans was in Arlington to see, not be seen.

Like all sports fans – the Texas Rangers are his team and Highland Park-bred, Los Angeles Dodgers’ pitcher Clayton Kershaw his favorite player – last fall he was captivated by Judge’s pursuit of the American League single-season home-run record. The mark of 61 was set by New York Yankees’ icon Roger Maris in 1961, making the chase and the New York’s media coverage of it intense.

A couple days before the Yankees arrived in Arlington for a season-ending four-game series against the Rangers, Youmans’ friend invited him to game No. 161. Judge had tied Maris’ record on Sept. 28 in Toronto, but then stalled.

“I was there to see Aaron Judge,” said Youmans, who sat in left field next to his friend in Section 31, Row 1, Seat 12. “I was naïve to what might happen to someone if they caught the ball.”

He had never snagged a ball at a Major League Baseball game. Just in case, he brought his glove.

Leading off in the first inning, Judge smacked the third pitch he saw: an 88-mph slider from otherwise anonymous Rangers pitcher Jesus Tinoco. Perfectly tracking a baseball hit 391 feet traveling at 100 mph, Youmans moved slightly to his left and made an outstretched, clean catch.

“Right in the pocket,” he said. “It was like slow-motion. Surreal.”

Before his life could permanently change, first his scenery temporarily shifted.

As he received congratulatory high-fives from elated and envious strangers in the stands, a member of Globe Life Field’s security team quickly escorted Youmans to a private room. On the way, a TV reporter asked what he was going to do with the ball.

Said Youmans, “That’s a good question. I haven’t thought about it.”

He remembers the 2 or 3 minutes immediately after the catch as “pure joy … the best thing about sports.” But, in an instant, his baseball euphoria deteriorated into their big business.

“Had I known then what I know now, I would’ve reacted differently,” he said. “But at the time, ignorance was bliss.”

“You think you have an offer, and then people ghost you. You can’t determine what their motives are." – Baseball fan Cory Youmans

In the holding room, Yankees executive director of security Eddie Fastook arrived and offered Youmans the chance to meet Judge and exchange the ball for memorabilia, photographs and tickets. He politely declined. An authenticator then checked the ball for special markings affixed by MLB. With the ball verified, Youmans hopped in a golf cart and met Rangers owner Ray Davis before two security guards took him to his car along a covert route.

Pressure was accelerating on social media.

During his drive home, Youmans received a text from his wife asking if he was near their apartment in Dallas. Someone had already shared their address on the internet. The couple grabbed their dog and moved to a friend’s house for several days.

"The man who caught the historic Aaron Judge baseball, Corey Youmans, doesn't exactly need the money. He is a vice president at Fisher Investments, which manages $197 billion worldwide."

Youmans, who had moved in with his grandparents in California at age 13 and eventually paid his own way as he became the family’s first college graduate, has never been on the prowl for a get-rich-quick scheme.

He isn’t some romantic baseball hero who voluntarily relinquished the ball out of his love of the game. Nor is he the rich-get-richer, greedy villain fittingly hoodwinked out of half his potential windfall, an image that's being pushed by the media and amplified across uninformed social networks.

Instead, he’s a pragmatist who meticulously researched the ramifications of how he handled one of baseball’s most important artifacts. Youmans’ decision to decline sketchy offers – everything from Ferraris via direct message to suitcases full of cash – and instead to net $1.5 million through an auction gave critics a punchline. But it gave him peace of mind.

“No matter what I did, not everyone would agree that it was the right strategy,” Youmans said this week. “If I gave it back I was stupid, and if I sold it I was greedy. I’m a private person that essentially won the lottery live on national TV. So, to say the least, it’s been an interesting experience. But I’m at peace with the process.”

Initially, he secured the ball in a bank vault in Dallas and did a deep dive into precedents.

He began weighing a supposed $2 million “sight unseen” bounty that smelled more like a publicity stunt than a real offer. He gauged estimates that the ball’s ultimate price could top the previous record – $3.05 million – for the No. 70 home-run ball hit by the St. Louis Cardinals’ Mark McGwire in 1998 (because of his steroid-tarnished legacy and the fact that his record was broken by Barry Bonds in 2001, McGwire’s ball has plummeted in value to around $300,000, according to collectibles marketplace Goldin Auctions). He even dug into the outcomes of people who had won the lottery.

“There is no playbook,” Youmans said. “I spent a tremendous amount of time researching what people in the past have done. I thought it would also make sense to keep an open mind and see what all of the options were. We thought we would try to identify the best private offer, and the best auction house. The offers are more challenging to sort through than people realize.”

Six weeks after his catch, Youmans was finally ready to throw the ball back … to the highest bidder. He hired New Jersey-based Goldin to auction the ball.

“We’ve already had an offer for $3 million,” Youmans’ attorney, Dave Baron, announced at the time.

This sparked criticism about the “greedy” guy in Texas who turned his back on $3 million. As he accepted his AL Most Valuable Player award in November, even Judge spoke about Youmans’ strategy.

“That’s a lot of money,” he said. “But I guess he’s got a better plan or thinks he can get some more. Hopefully he’s making the right decision for him and his family.”

The bidding started at $1 million on Nov. 29 and increased five times, climaxing at $1.5 million less than an hour before the auction closed Dec. 17.

While fans and critics immediately began jeering at Youmans for “losing” $1.5 million by not taking the $3 million offer, he walked away satisfied with his proceeds.

Youmans admits he could have potentially squeezed more money out of the ball. In addition to the $3 million offer, there were also bizarre offers for exotic cars via Instagram direct messages and by email through third-party intermediaries such as law firms and art dealers purporting to represent clients.

“There was a lot of excitement, but it’s hard to tell who is legitimate and how serious they are,” Youmans said. “You think you have an offer, and then people ghost you. You can’t determine what their motives are. The lack of transparency was a major factor for me.”

His logic: Comfort over cash.

If the $3 million offer was on the up-and-up, why didn't the person who offered it submit a bid at auction? The ball was ultimately purchased by a sports collector identified only as “Joe” from Wisconsin.

“It was a legitimate offer, but without a lot of transparency,” Youmans explained of the $3 million. “I was just uncomfortable selling the ball behind closed doors. So we went with the safe, open, fair route at auction. How the ball was sold was more important than what it sold for.”

In April the Rangers will debut a new pitching ace in Jacob deGrom and will play on ESPN’s Sunday Night Baseball for the first time at Globe Life Field. There will be hope. There will be fanfare. There will be Youmans, merely a footnote to homer history.

His plans for the money? Some will be spent for his family’s first home, and some for repaying – in the form of a classic car garage and workshop – his grandfather, who put off retirement to see him through high school.

He moves forward, gladly keeping the fortune but having had his fill of the fame.

“I don’t expect to go on and do something else that gets me on Good Morning America,” he said. “This was enough for me.”
KEEP THE DALLAS OBSERVER FREE... Since we started the Dallas Observer, it has been defined as the free, independent voice of Dallas, and we'd like to keep it that way. With local media under siege, it's more important than ever for us to rally support behind funding our local journalism. You can help by participating in our "I Support" program, allowing us to keep offering readers access to our incisive coverage of local news, food and culture with no paywalls.
Make a one-time donation today for as little as $1.
Richie Whitt
Contact: Richie Whitt