Gloria "Flu, I Bind You" Copeland Is a Witch, Whether She Can Do It Or Not 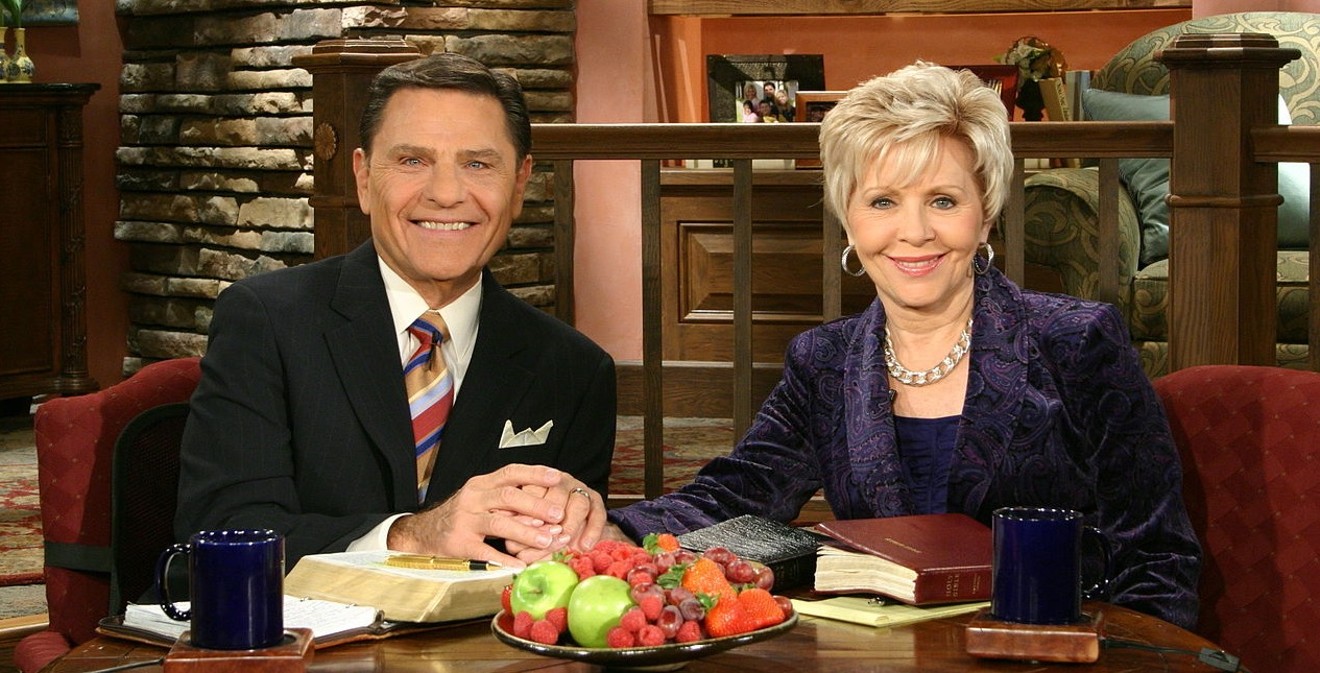 Gloria Copeland is a witch. Kenneth Copeland Ministries/Wikimedia Commons
Well, I have to say this for Tarrant County televangelist Gloria Copeland: She has truly steered me back into the Bible. It’s been a while, but I find I am on familiar ground even after all this time.

I grew up in a religious household and attended a church-based high school. Then, sadly, I attended the University of Michigan, where liberals forced me to drink beer and take other potions.

At any rate, as a kid, I studied and was taught the Bible pretty intensely, and this week, when I saw Copeland on TV talking about the flu, I found myself diving back into it for answers. You probably know by now what she said. Copeland, a founder with her husband, Kenneth, of Kenneth Copeland Ministries, denied there is any such thing as a flu season.

Her argument was that people of true faith can’t get sick because Jesus Christ bore away their illnesses with his death on the cross. I know that sounds crazy to a lot of people. But for several years when I was a kid, I lived in Concord, New Hampshire, which is sort of the Rome of Christian Science because it’s near Bow, where Christian Science founder Mary Baker Eddy was born.

On weekends, my buddies and I used to go down to the First Church of Christ, Scientist, a gift to the community of Concord from Baker Eddy. We went there to get in Bible quotation shootouts with the elderly Christian Science ladies who stood out front of the church with their Bibles in their arms. Yes, indeed, it was nerdiness taken to an almost unimaginable extreme. Other kids were drinking and driving convertibles by then.

The Christian Science ladies won the Bible shootouts with us. We could hang in there for maybe two or three rounds of dueling verses, but then the ladies always obliterated us with a nuclear Bible blast. They were smart and interesting. I don’t believe in any of that stuff about faith curing diseases like sepsis and cancer, but I’ve always thought people who believe in the power of will should at least be heard with respect.

That’s not what sent me to the Good Book when Copeland spoke about the flu. In all of what she had to say, I was struck by 13 words. After praying for people already suffering from the flu, Copeland said, “Flu, I bind you off of the people in the name of Jesus.”

Oh, boy. This gets us into a dark chapter in the history of early New England. Maybe that had something to do with why those old ladies in Concord were so careful and so adamant: They always drew a hard line between Christian Science prayer, in which they believed, and faith healing, which they denounced.

The utterance, “Flu, I bind you,” is what the Shorter Oxford English Dictionary would call an incantation — “the use of a formula of words spoken or chanted to produce a magical effect; the utterance of a spell or charm; more widely, the use of magical ceremonies or arts, sorcery, enchantment.”

What I’m talking about — not to put too fine a point on it — is witches. Witches have always scared the socks off me, in no small part because of what the Bible says about them.

Deuteronomy is emphatic: “There shall not be found among you any one that maketh his son or his daughter to pass through the fire, or that useth divination, or an observer of times, or an enchanter, or a witch, or a charmer, or a consulter with familiar spirits, or a wizard, or a necromancer.”

Exodus is tougher: “Thou shalt not suffer a witch to live.”

But Nahum. Oh, my goodness. Nahum. “[There is] none end of [their] corpses; they stumble upon their corpses, because of the multitude of the whoredoms of the well-favored harlot, the mistress of witchcrafts, that selleth nations through her whoredoms, and families through her witchcrafts.”

It’s not exactly a laughing matter, is it? In this particular time more than any other I can remember, we need to stop, pause and think hard about the lure and peril of magical thinking.

Copeland and her husband sit on President Donald Trump’s Evangelical Advisory Board. While I was traipsing around the Bible anyway, I decided to look for anything that would give me guidance in that arena.

The closest thing I could find was in Leviticus: “And he that hath his hair fallen off from the part of his head toward his face, he [is] forehead bald: [yet is] he clean. And if there be in the bald head, or bald forehead, a white reddish sore; it [is] a leprosy sprung up in his bald head, or his bald forehead.” But is that germane?

Here is what I think. Gloria Copeland is a witch. She uses incantations to bring about magical results. Of course, I don’t believe she ever gets any results because I don’t believe in magic. But I know from watching her on TV that she wants her followers to believe that her incantations get results, and that makes her a witch. 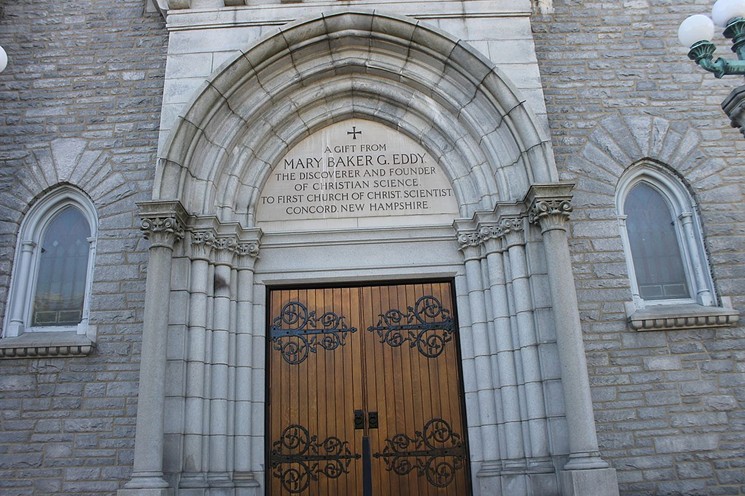 Christian Scientists draw a strict line between prayer, in which they believe, and faith-healing, in which they do not.
Billy Hathorn/Wikimedia Commons
OK, on that point, I want to go back and talk a little more about he that hath his hair fallen off from the part of his head toward his face. He that hath his hair fallen off, you may have noticed, wants to have a grand military parade in Washington with tanks and missiles and drumbeats and goose-stepping.

He wants us to believe — perhaps because he believes — that this gaudy ritual not merely will make us appear to be more powerful but actually will render us more powerful. It will conjure up power. And that, of course, gets us back into the Shorter Oxford English Dictionary: “… the use of magical ceremonies or arts, sorcery, enchantment.”

So maybe it’s more germane than we thought at first blush? After all, think about it. You can’t retreat from reality one room at a time. You have to walk out on the whole castle. In fact, you have to run from it and never look back. So is it really all that far a leap from the military parade to “Flu, I bind you off of the people”?

By the way, I also searched through the Bible for a usage of bind to mean remove or separate and didn’t find anything. There’s a lot of “binding to” in the Bible, but I didn’t find any “binding off.” But let’s not quibble over Bible grammar.

The bottom line for me is that Gloria Copeland is a scary witch. She wants to convince people that she can cure the flu with a magical incantation. That’s witchcraft, plain and simple.

In the last analysis, I think it is germane and significant that he that hath his hair fallen off from the part of his head toward his face has a witch on his advisory panel. The military parade and the denial of flu season are of exactly the same cloth mentally. The scary thing is not so much that they try to sell it. The scary thing is that people buy.