Former City Council member Carolyn Davis, now dead, was described to FBI agents by her confessed co-conspirator as always asking for money and suffering from a gambling addiction. Jim Schutze
The main lawyer in an upcoming Dallas City Council corruption trial is also an important player in impeachment. And quid pro quo, by now the best known Latin phrase in Washington, meaning this for that or what for what, also is at the center of our local imbroglio.

President Trump is accused of holding up military aid to Ukraine in exchange for political dirt on Joe Biden. He insists there was no quid pro quo.

Hamilton, a developer of subsidized low-income housing in Dallas, is accused by the federal government of paying $40,000 in bribes over a period of years to the late Carolyn Davis, a council member who died in a car wreck last July. The $40,000 is the quid. The quo would be Davis’ work as an agent of the city in helping Hamilton win a city loan and lobbying a state agency to give Hamilton a lucrative tax break. Lowell says in court filings that the $40,000 was for legitimate charitable activities, and he seems ready to pony up plentiful evidence to that effect.

The charge that Hamilton paid former council member Dwaine Caraway a bribe is even muddier. The government concedes that Hamilton talked to Caraway not to ask for his vote on anything Hamilton was doing in his own business. Hamilton wanted the councilman’s help getting a paid sick leave proposal put on the ballot for an upcoming referendum.

So the quid, in this case, would be a $7,000 check that Hamilton admits he gave Caraway. And the quo that Hamilton got back in exchange would be that the people of Dallas would get to vote on paid sick leave (which didn't happen). Lowell says in his motion that this picture doesn’t even meet the quid pro quo test at either end.

“Aside from the lack of a quo,” Lowell’s motion states, “there is no quid here.”

“Aside from the lack of a quo, there is no quid here.” — Abbe Lowell

Lowell argues in his motion that a complete and unredacted transcript of the conversation (sound familiar?) will show that Hamilton wrote Caraway the check because Caraway pleaded with him for help paying his mother’s medical bills. I see two things. First, having Dwaine Caraway ask for help with his sick mother was always sort of the cost of admission for spending 10 minutes with him. Luckily as a journalist I was protected by that other ancient principle of the law, the rule of no dinero.

Second, Caraway asked Hamilton for the money after the feds already had their claws in Caraway on the unrelated bribery charges for which he is now serving time. Everything I heard from southern Dallas in that period was that Caraway was calling all over southern Dallas transparently trying to get people to incriminate themselves on the phone so that he could sell them to the feds as human sacrifices to buy his own time down.

One guy told me he not only wouldn’t pick up when he saw Caraway’s caller ID, he halfway wanted to rip the memory card out of his phone, toss the phone out the car window and back up over it.

It seems clear from the discovery demands that Lowell has filed that he suspects the feds may have been sitting with Caraway telling him what to say when Hamilton called. That doesn’t make Hamilton any smarter for writing Caraway a check. But Lowell argues that, even if Hamilton’s purpose in writing the check was to get paid sick leave on the ballot, that’s a public policy issue, not a criminal quid pro quo. I think we have heard something like that from Washington, too.

I have to admit I have trouble seeing Hamilton as a paid sick leave gangster. How does that one work? What’s the play?

This all takes place in a particularly depressing context. The story of Caraway, now in prison, and Davis, who confessed to bribery but is now dead, is the same as the stories of council member Don Hill, sent to prison in 2009 where he stayed until almost his last days, James Fantroy, convicted in 2008 shortly before his death, and Al Lipscomb, convicted in 2000, sentenced to house arrest and then acquitted on appeal, now dead. All represented southern Dallas districts, and all but Fantroy struggled to make ends meet.

The central theme here is about elected officials, poor or close to poor, representing poor constituencies with crying needs, selling out their own constituencies for nickel-and-dime bribes. You can view it as rich white people pressing bribe money into grasping palms. Or you can view it as grasping palms. If the feds think they need to rope in a white guy, I would understand. But it needs to be a white guy who’s guilty.

With Davis dead, the two witnesses against Hamilton are Caraway, who is the city’s biggest confessed bribe-taker ever, and Jeremy Scroggins, Davis’ confessed confederate in bribe-seeking. Scroggins was proprietor of a nonprofit named Hip Hop Government, which I have written about often here before in an unrelated story.

Scroggins, who drew a 51-month federal sentence in 1999 in a case that is now sealed from public view, is back in federal prison, having pleaded guilty to conspiring with Davis to seek bribes. The government claims Davis told Hamilton to funnel bribe payments through Scroggins as a means of laundering the money.

Lowell says in his motions that he can produce persuasive evidence that the money Hamilton paid Scroggins was intended for legitimate charitable activities and that, if Scroggins was skimming cash and returning it to Davis, Hamilton had no way of knowing.

Plus, there is this: What kind of people and on whose word has the government based its case against Hamilton? A motion filed by Lowell, apparently based on FBI investigative notes called 302 reports, describes how Scroggins talked about Davis, his partner in crime, to FBI agents: 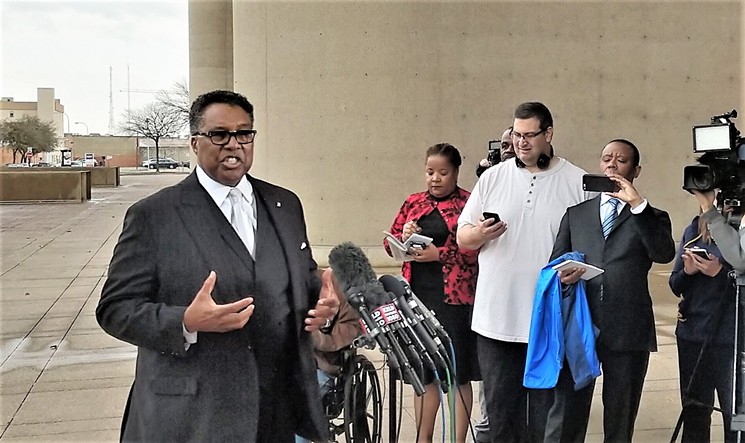 The federal government is building its case against real estate developer Ruel Hamilton on the word of former City Council member Dwaine Caraway, now in prison as the most bribed city council member in Dallas history.
Stephen Young
“Scroggins told the government that Davis ‘was mostly truthful, but not all the time,’ and he claimed that she was ‘an eccentric person who says lots of reckless things,’ ” the Lowell motion states.


“Scroggins told the government that Davis ‘was mostly truthful, but not all the time,’ and he claimed that she was ‘an eccentric person who says lots of reckless things.’ ” — Abbe Lowell

“He (Scroggins) said that Davis ‘asked for money from people all the time,’ she would hit him ‘up for money twice a month and sometimes once a week,’ and he would usually give her $100 to $300 at a time ($500 at the most) … Scroggins claimed that Davis had a ‘gambling addiction.’ ”

“Prior to the final educational trip in March, 2015, Dr. (Jerry) Chambers (head of the organization) had been diagnosed with pancreatic cancer. On the last trip, Dr. Chambers contracted pneumonia, and he know that he did not have long to live.

“Dr. Chambers and I had a meeting with Jeremy Scroggins and Carolyn Davis to discuss how Dr. Chambers wanted the trips to continue after his passing. Dr. Chambers said he knew there were funds remaining that could pay for at least one more educational tour.

Not to me, apparently.

Scroggins and Hip Hop Government came across my radar in a strikingly similar fashion in stories I was writing about a car wash on MLK Jr. Boulevard. In that story, the proprietor of the car wash, Dale Davenport, helped successfully lobby business owners on MLK to levy a special assessment on themselves to pay for private security and litter cleanup.

Even though the assessment, a six-figure annual amount, was collected by the city, Davis insisted that Hip Hop Government and Scroggins be authorized to administer the money. When Davenport saw that the security patrols and cleanups had been suspended after only a short time, he asked city officials what was going on. The officials told him that the money had mysteriously and prematurely run out and that Hip Hop Government was no longer on the scene.

When Davenport asked for simple bookkeeping for the fund, he was told no records existed. As far as I know, the city has never lifted a finger to find out what happened to that money. Under Texas law, the fiduciary at City Hall responsible for tracking the money is the City Council. Lots. Of. Luck.

The things to which Scroggins and Davis have pleaded guilty include cheating southern Dallas high school students out of an opportunity to learn the civil rights history of the nation. If they stole the MLK assessment money, they sabotaged efforts to revive the great ceremonial thoroughfare at the center of southern Dallas. The appearance is that the City Council has aided and abetted these thefts by refusing to even look for the missing money.

So the case against Ruel Hamilton comes down to the words of Dwaine (“My mama’s sick”) Caraway, Jeremy (“Sadly those funds are no longer with us”) Scroggins and Carolyn (“I’m dead”) Davis. Wow. It certainly is eye-opening to look at the quid pro quo issue on the local level, detoxed from national politics. I think I prefer the national version, because I know so much less about it.
KEEP THE DALLAS OBSERVER FREE... Since we started the Dallas Observer, it has been defined as the free, independent voice of Dallas, and we'd like to keep it that way. With local media under siege, it's more important than ever for us to rally support behind funding our local journalism. You can help by participating in our "I Support" program, allowing us to keep offering readers access to our incisive coverage of local news, food and culture with no paywalls.
Make a one-time donation today for as little as $1.