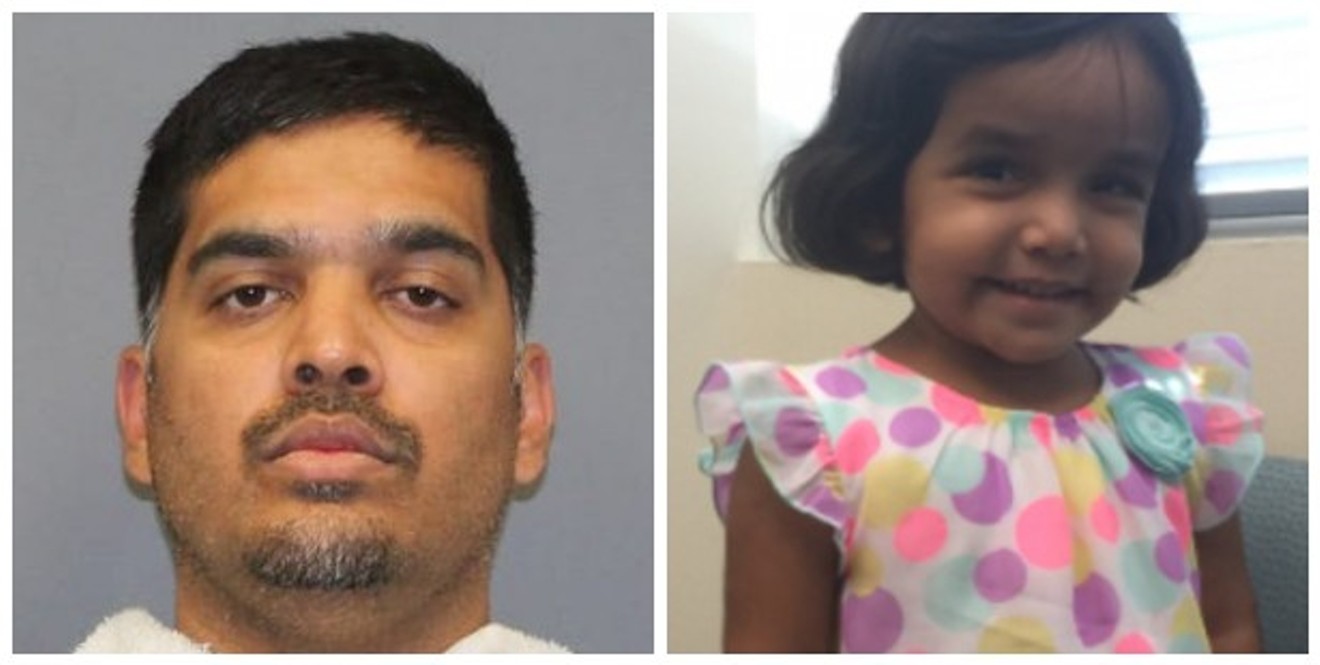 Wesley and Sherin Mathews Richardson Police Department
A Dallas County jury sentenced Wesley Mathews to life in prison late Wednesday afternoon for his involvement in the death of his 3-year-old adopted daughter, Sherin Mathews. A grand jury indicted Mathews on capital murder charges in 2018, but Mathews pleaded guilty to a lesser charge, injury of a child by omission, just before his trial was set to start Monday.

Wesley Mathews and his wife, Sini Mathews, reported their daughter missing in October 2017, telling police that she'd disappeared after being forced to stand in the alley behind the Mathews' home in Richardson as punishment for not drinking her milk. After two weeks of looking, searchers found Sherin's body less than a mile from the house. Wesley Mathews admitted to police that he'd moved his daughter's body and said that she'd died after choking on milk in the family's garage.

According to testimony from doctors at a child custody hearing for the Mathewses' other daughter in December 2017, Sherin showed significant signs of abuse during the year between her adoption by the Mathewses from India and her death.


"Great guys and great dads, they don't stick their daughters in trash bags and dump them in sewage drains." — Jason Fine

Dr. Susan Dakil, a pediatrician certified in child-abuse pediatrics, testified that X-rays revealed multiple fractures in Sherin's arms and legs. Because of the way the injuries had healed, Dakil said, she was confident that the injuries happened after her adoption. The doctor also said she didn't believe Sini Mathews' assertion that Sherin broke her elbow when her older sister pushed her off the couch.

When Dakil reported her findings to Sini Mathews, the mother said she disagreed with the findings and told the pediatrician that a report to Child Protective Services would "ruin her weekend," Dakil said.

Testifying at his sentencing trial, Mathews told jurors that he put his daughter's body in a blue recycling bag and placed her in a nearby culvert because he wanted to protect her body. He waited hours to call the police and didn't wake his wife, who worked as a nurse, because he was scared Child Protective Services might get involved.

"I could not absorb what had happened. I could not believe that in a very quick time my child had gone from me," Mathews said, according to The Dallas Morning News. "I was really, really paralyzed."

Prosecutors said Mathews' actions were callous, rather than protective.

Mathews, 39, will first be eligible for parole in 2049.
KEEP THE DALLAS OBSERVER FREE... Since we started the Dallas Observer, it has been defined as the free, independent voice of Dallas, and we'd like to keep it that way. With local media under siege, it's more important than ever for us to rally support behind funding our local journalism. You can help by participating in our "I Support" program, allowing us to keep offering readers access to our incisive coverage of local news, food and culture with no paywalls.
Make a one-time donation today for as little as $1.