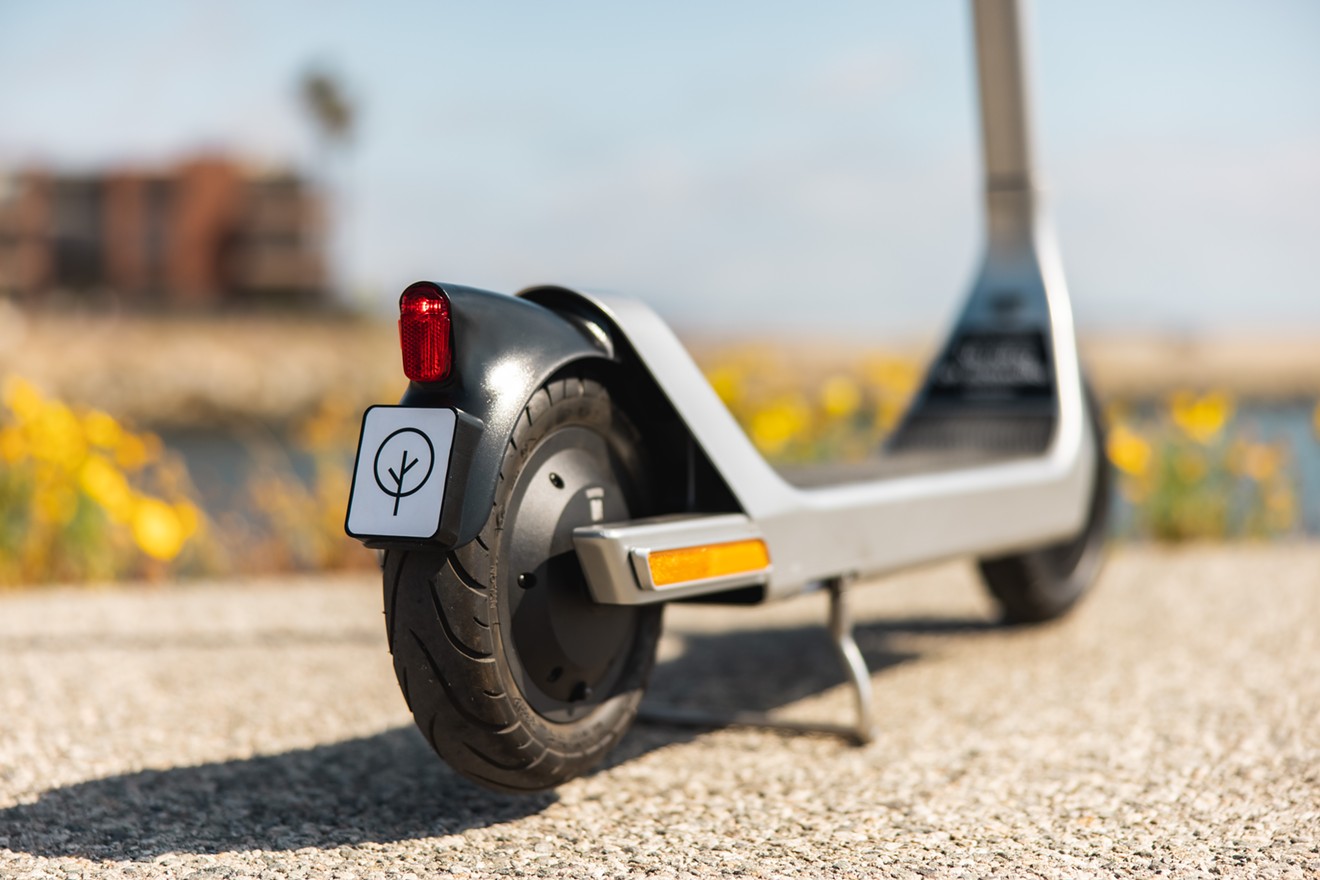 There still isn't a hard timeline on when Dallasites can expect electric scooters to return. courtesy of Bird
Over the weekend, you may have seen some electronic rental scooters pop up in Dallas. Krista Nightengale, executive director of The Better Block, a local nonprofit focused on urban design, posted a video on Twitter showing a small fleet of the controversial scooters in the city.

“Are scooters back in Dallas?” Nightengale wrote. We reached out to the city for some clarification (as did Nightengale), and it turns out those scooters weren’t permitted. At the moment, Dallas is still working to relaunch its dockless vehicle program.

Dallas’ Department of Transportation is collaborating with a micromobility working group on plans to relaunch the program. “Changes to the program have not yet been approved by City Council, nor has permitting reopened,” a spokesperson for the city said.

The city’s Transportation and Infrastructure Committee will be briefed on proposed recommendations from the micromobility working group on Tuesday, Feb. 22.

The scooters Nightengale posted about are owned by a small, local company called Blitz. The company didn’t respond to requests for comment. Meanwhile, scooter companies say they could help pedestrians get to bus stops more easily now that DART has nixed several stops around the city.

But back in September 2020, when Dallas banned the scooters, citing public safety concerns, Blitz owner Curtis Dixon could be seen pulling his scooters off the street and packing them into his red pickup truck. He told NBC at the time that the scooter business was his livelihood. “My family, that’s how we eat,” Dixon said.

The city of Dallas spokesperson said: “City staff has communicated with Blitz and informed them to refrain from deploying dockless vehicles in the public right-of-way. Blitz will continue to be included in the outreach to potential operators as the micromobility working group continues to guide the relaunch framework.”

“Changes to the program have not yet been approved by City Council, nor has permitting reopened." – city of Dallas spokesperson

Bigger dockless vehicle companies, such as Bird, are also still working with Dallas officials to be welcomed back into the city. Next week, Blanca Laborde, director of government partnerships at Bird, will be in town to show off the company’s scooters, bikes and other tech to local officials and media.

“Bird is happy to partner with Dallas to reinstate an equitable and safe shared micromobility program that will promote broader city goals as well as add to the positive impact Bird’s programs are already driving in more than 350 cities globally,” Laborde said by email. “We are eager to bring our latest e-scooters and e-bikes, as well as our innovative designated parking and riding zone technology, to the streets of Dallas.”

But Dallasites need access to more micromobility options sooner rather than later, especially with the rollout of the new DART bus routes, Nightengale said.

DART recently launched a new bus network in an effort to increase frequency and ridership while reducing wait times, which the new network has done for some.

But this also meant getting rid of some of the bus stops. That's why some riders now have to walk up to a mile to get to their new stops in a city that lacks adequate pedestrian infrastructure for all and prohibits some micromobility options like rental bikes and scooters.

Oh, and Dallas’ sidewalks are really crummy (for example, we're missing some 2,000 miles), and the city has some of the most dangerous streets in the country, according to an RV rental company called Outdoorsy based on statistics from the National Highway Traffic Safety Administration.

“With DART’s new system, we must do something about that last-mile gap,” Nightengale said.
“I’m tired of Dallas being so behind on micromobility, caring so little for pedestrians, and continuing to prioritize motorists.”

Susan Sanders Wansbrough, a 69-year-old retired resident in northern Dallas, would use the DART buses at least twice a week before the new network was launched, she told the Observer. The bus stop was only half a block away from Wansbrough’s house, she said. That route has since been eliminated. Now, the closest stop is about a mile away, Wansbrough said, and she likely won’t use DART as frequently as a result.

She doesn’t have to work these days and she has a car, so the new network is only a small inconvenience for Wansbrough. For others, it can be debilitating, she said.

For example, southern Dallas resident Eunice Eze told The Dallas Morning News she’s been recovering from a stroke over the last few months, making long walks difficult. But the 10 minutes she used to have to walk to the DART bus stop in her part of town was manageable.

After the redesign, though, she found herself in a similar situation as Wansbrough, having to walk a mile to catch the bus. Now, she usually catches a ride from someone to the bus stop, and DART has recommended some riders utilize ridesharing services like Lyft if the new stops are too far away.

DART told the News it is still gathering comments from residents to hear their concerns and is working on a five-year plan to improve all DFW public transportation.

One of Blitz’ or Bird’s scooters may not be the answer for Eze, but they could help others close that “last mile gap.” Scooters are being tested as a last gap solution for public transit in Tennessee right now.

In a press release announcing the program, Brian Buccella, Bird's senior vice president of consumer products and government partnerships, said, “Together, we can go further and have an even greater impact on providing people with a clean, safe alternative to transportation options that result in tailpipe emissions."
KEEP THE DALLAS OBSERVER FREE... Since we started the Dallas Observer, it has been defined as the free, independent voice of Dallas, and we'd like to keep it that way. With local media under siege, it's more important than ever for us to rally support behind funding our local journalism. You can help by participating in our "I Support" program, allowing us to keep offering readers access to our incisive coverage of local news, food and culture with no paywalls.
Make a one-time donation today for as little as $1.