Scott Griggs Mark Graham
Last week a few readers posed a fair challenge to a Dallas Observer story by Stephen Young. The story confirmed that mayoral candidate Eric Johnson was anointed by a wealthy Dallas oilman looking for somebody to stop four-term City Council member Scott Griggs from getting elected mayor. The challenge posed by readers, if I may paraphrase, was “So what?”

It’s not only a fair question. It’s a good one. I happen to know the answer, and the answer is important, because it’s the whole deal in this election.

Young’s story was based on a covert recording of a fundraising party. At that event, Jeanne L. Phillips, an employee of Ray L. Hunt, chairman of Hunt Consolidated Inc., explained to the assembled guests that, earlier this year at Hunt’s offices in Dallas, she and Hunt interviewed Johnson, a state representative since 2010, for the first time. On the recording of her speech to the guests, Phillips tells them that, not long into their encounter with Johnson, she and Hunt excused themselves from the room.

Out of Johnson’s earshot, Phillips and Hunt agreed: “This is the guy. This is the one we've been waiting for.” Phillips told the invited guests: “We planned to stay out of the race in the first round.” But, she said, “We did not want to see Scott Griggs elected mayor.”

So impressed were they with Johnson that they decided to jump in anyway. The main message in her speech to the party was that she and Hunt now urgently want to bring in as much wealthy Dallas establishment money as they can muster to boost Johnson’s candidacy.

The reader question goes to the core news value of Young’s story: Hunt and his employee are impressed with Johnson. So what? Isn’t Johnson a pretty impressive guy?

He absolutely is. His credentials and accomplishments are no more impressive than his opponent’s, but both are very bright, well-educated men. They are lawyers who know how to present themselves well in an interview. Nothing is wrong with Ray Hunt choosing Eric Johnson to be his gladiator against Griggs. I will even go way out on a limb and say that, at press time for this column, I still don't know anything terribly wrong with Ray Hunt or Jeanne Phillips. But as wonderful as this city may be on some scores, a lot is wrong with Dallas.

All the way back to the 1920s when the local business elite broke the stranglehold of the Ku Klux Klan, well-meaning white business and landholding families have been forming coalitions with well-meaning black southern Dallas community and political leaders. Like it or not and whether or not you approve of that process, the outcome is on the map for all to see. The prize for these long decades of political accommodation has been one of the most abysmally segregated cities in the nation.

Segregation has always been at the heart of the downtown/South Dallas deal. To earn modest concessions from the white oligarchy, black leaders here have agreed to go slow on demands for assimilation — slower than leaders in other parts of the country. The reward should be no surprise to us. The reward for less demand for integration has been more segregation. The reward for demanding less equity has been more inequity, for demanding less justice more injustice.

A lifetime operating at the top of the pyramid has taught them that good ideas, order, planning and problem-solving cannot come up the other way, organically from the bottom.

Another even broader cost of the old racial accommodation exists. The symbiosis between the downtown white business leaders and the southern Dallas black leadership has created a new stranglehold, this one on the burgeoning middle-class constituency in the city.

In the 1980s, it was called the neighborhood movement. Now the city's only daily newspaper derisively calls it the “progressive bloc.” The political force they’re talking about isn't susceptible to racial categorization and probably is only partially defined by class or money. Terms that come closer are new urbanist or communitarian.

We are talking about people interested in living in the city, sure, but it's more than that, and it’s happening in cities all over America. As the national and state realms slip deeper into hopeless entropy, people of conscience with a will to make things work in this world seem to be channeling their energy and zeal into nearby intimate connections. It's almost as if they are telling themselves, "OK, if the nation's capital is a total loss, how about we work on the block?"

More as evolution than by design or intent and for all kinds of reasons, the traditional downtown/South Dallas racial accommodation now finds itself diametrically opposed to the new urban ethos. The problem is more habit than philosophy. In order to spare black leaders embarrassment in their own community, the old business leaders have learned to conduct their business with them exactly as it was done between Ray Hunt and Eric Johnson — in the big oilman's office downtown and in the homes of the wealthy, with fraternal handshakes and coded signals sent out from private parties (a system obviously devised before the advent of the sound-recording smartphone).

The outcome is plain to see. The old oligarchical system is fundamentally top-down, centralized and hierarchical. The people who run it don't understand, don't trust and just don't get the organic, grassroots, bottom-up culture of the new urbanism.

That simple failure — just can’t get it — may explain a puzzle that has always nagged me in all of this: Why wouldn't the Ray Hunts of the world see Scott Griggs as the one for whom they have long been waiting? If what they want in a mayoral candidate is a record of economic development and rising land values, then Griggs, the four-term council member from North Oak Cliff, is their boy. 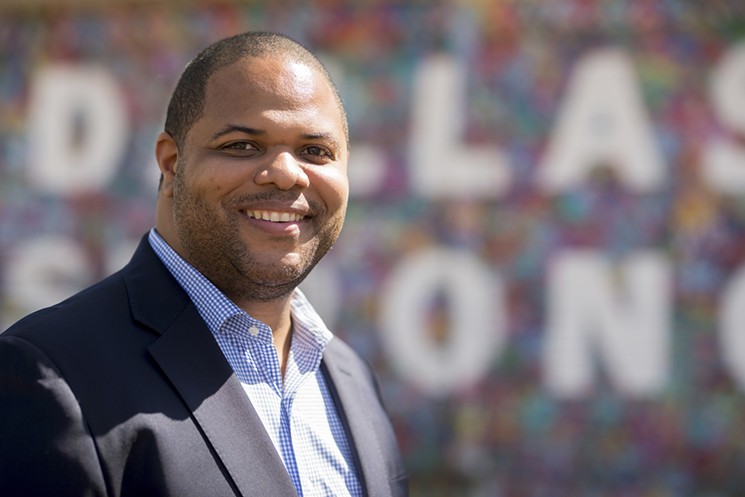 Eric Johnson
Brian Maschino
Since even before he was elected to the council, Griggs has been up to his elbows in successful economic development in what has become, under his leadership, one of the city's hottest markets. Meanwhile, Hunt's man, Johnson, brings not one iota of that to the table. In nine years in the Legislature, he has compiled the record of a stranded hippie, unable to get anything substantive done.


“This is the guy. This is the one we've been waiting for. We did not want to see Scott Griggs elected mayor.” — Jeanne Phillips

I might not hold that too hard against him. I’m a hippie. Johnson has fought the good fight on a few things, like shaming the Legislature into taking down the worst of its Confederate relics. The Texas Legislature is such a swamp, I’m more suspicious of anybody in it who is popular and powerful. But the fact remains that Johnson has zero history of accomplishment in the very areas where somebody like Hunt should care most, business development and increasing land values, while Griggs has compiled a long track record of wins.

The answer to that riddle, I believe, is that Hunt’s preference and the preference of people like him is not driven by outcomes but by method. It isn’t so much that people in the old guard don’t believe in what Griggs gets done. They don’t believe in the way he does it. A lifetime operating at the top of the pyramid has taught them that good ideas, order, planning and problem-solving cannot come up the other way, organically from the bottom. They think that’s just a big, fat screwy idea.

And you know what? If I were trying to puzzle it out logically, I might agree. What convinces me they are wrong are my decades of living in a very urban part of the city where people have been doing the hard work of community-building. All the best ideas — what to keep and what to toss — always seem to come up out of the messy, sometimes contentious hard work of neighborhood politics. The big, logical top-down ideas — things like straight, wide highways rammed through neighborhoods — come from City Hall, and those ideas are almost always awful.

The bad ideas for cities may be good ideas for suburbs. You can look down on a suburb from an airplane and almost see what the person who first sketched it on a drawing board was thinking that day. You might even be able to guess what she had for breakfast. But a great city is a wonderful, inscrutable collage and puzzle.

The changes welling up from the ground in Dallas, changes for which Griggs is the standard-bearer, are not merely local. If anything, Dallas is late to the party. An entire demographic wave from Gen X to millennial to Gen Z has been sweeping into American cities, taking root and remaking the urban world for a decade and a half. By setting its jaw against that historical wave, the old Dallas oligarchy stakes out a doomed position on a very lonely beach.

And why? When Ray Hunt and Jeanne Phillips look at Scott Griggs and see the man they must stop, what is it they must stop? When they look at Eric Johnson and immediately see the guy they have been waiting for, what do they see?

I doubt they know their own answers objectively. What they feel is more likely to be dread in the bones. As Hunt and Phillips confront the broad sweep of history, they feel the ground shifting beneath their feet. Theirs is the politics of queasiness, up against the politics of boldness — not so much that they sense things going in a direction they don’t like, more that things are going in a direction they don’t get.

Maybe you can live in a tower downtown forever and not get what’s going on beneath you, but the rest of us out here on the ground have to get it. We can’t afford to be obtuse. We have to keep our eyes on the prize. In the end, the prize will never be glitzy buildings and billionaires. It will always be justice, and from justice will come great cities.
KEEP THE DALLAS OBSERVER FREE... Since we started the Dallas Observer, it has been defined as the free, independent voice of Dallas, and we'd like to keep it that way. With local media under siege, it's more important than ever for us to rally support behind funding our local journalism. You can help by participating in our "I Support" program, allowing us to keep offering readers access to our incisive coverage of local news, food and culture with no paywalls.
Make a one-time donation today for as little as $1.