A Bone Marrow Tour of Dallas 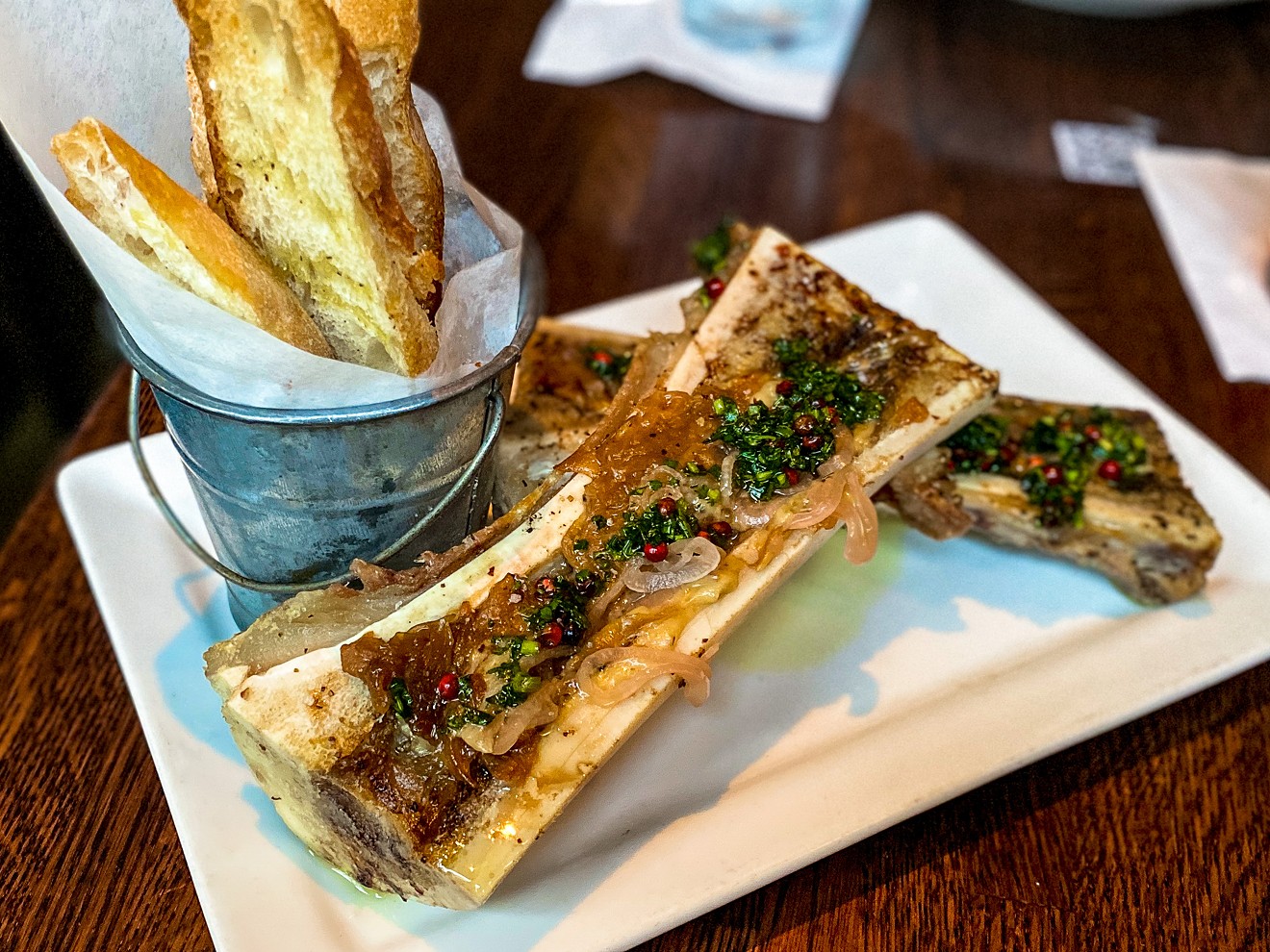 Boulevardier's roasted bone marrow Hank Vaughn
On the one hand, back in the day when most households had a set of good silverware that was polished once a year and used for dining less often than that, one would often find a “marrow spoon” amongst the various specialized cutlery. On the other hand, back in that same day the butcher would often give away bones that one could then roast for their yummy bone marrow. It was a weird dichotomy of American culture, where something was at once prized by culinary enthusiasts to the point that a special utensil was created for it, while at the same time was given away or thrown out by the local grocer. What a time to be alive.

Fast forward to the present when more restaurants are offering bone marrow on their menus, most as an appetizer but some as an integral component to a dish. People seem to either love or hate this item; very few are indifferent. To me, nothing else can really beat the pure umami goodness put forth by this dish, and  I’m on the lookout for new places that offer it. Here are five spots in DFW that offer this treat in some form or another. Tei-An's veal bone marrow comes with a miso glaze.
Hank Vaughn
This Japanese restaurant is often considered one of the best in Dallas, specializing in freshly made soba dishes. They also have a veal bone marrow on the menu. It comes sitting on a bed of rock salt with soba crackers on which to spread the luscious marrow, which has a miso glaze. Positives: great flavor, and unlike many of the places on this list, they provided a spoon in order to get all the goodness out of the bone. It was also the least expensive on this list at $14, but that comes at a price, and it’s the one negative: there is only one bone-half to an order. Rapscallion's busy bone marrow has dollops of a lemon aioli atop.
Hank Vaughn
Rapscallion serves some good Southern-inspired comfort food, and they do it well in a cozy environment. Their roasted bone marrow is topped with mushroom conserva, chili oil and lemon aioli along with some nicely toasted bread. For me, this was too busy. The toppings overwhelm the bone marrow flavor, reducing it to what basically seemed to be an afterthought to a salad. It comes with two bone halves as opposed to Tei-An’s single, but it also costs more at $22. Elm and Good serves what they call “farm-focused fare,” and the ingredients do indeed seem fresh and local. Their contribution to the DFW bone marrow scene is a bourbon-glazed bone marrow at $18. It comes two halves to an order and is perfectly seasoned yet unadorned save the bourbon glaze. No spoon was provided, but toasted country bread and a small parsley and orange salad were included on the plate. KAI's bone marrow fried rice.
Hank Vaughn
KAI provides a modern take on Asian cuisine, including such things as Peking duck tacos, pork belly bao, sushi and Japanese wagyu A-5 grade beef, as well as oxtail and bone marrow fried rice. The bone marrow fried rice is so good that it’s not unheard of for them to sell out of this dish midway through the dinner service. This is a little different than the other entries on this list, as it’s a main dish and not an appetizer. The bone marrow is also just a component of the dish, but it’s an important one. The fried rice is light and flavorful, and the oxtail incorporated into it is rich and meaty yet not fatty like oxtail can be. The fried rice is served in an earthen bowl, and a large bone with marrow sits on top. It makes for a beautiful presentation, and one can either scrape the bone marrow into the rice before eating or go back and forth between bites of rice and tastes of the marrow. If you’re a fan of really good fried rice and also bone marrow, you can’t go wrong.

Our bone marrow tour of Dallas, of course, was not exhaustive, but these five are a good starting point for anyone interested in the mysteries of the marrow. Meddlesome Moth and Knife also offer bone marrow and have been covered previously in the Observer.

Otherwise, if you have a box of forgotten fine china and silverware somewhere gathering dust and tarnish, you might want to see if you have some of the elusive bone marrow spoons. If not, perhaps a culinary field trip is in order.
KEEP THE DALLAS OBSERVER FREE... Since we started the Dallas Observer, it has been defined as the free, independent voice of Dallas, and we'd like to keep it that way. With local media under siege, it's more important than ever for us to rally support behind funding our local journalism. You can help by participating in our "I Support" program, allowing us to keep offering readers access to our incisive coverage of local news, food and culture with no paywalls.
Make a one-time donation today for as little as $1.