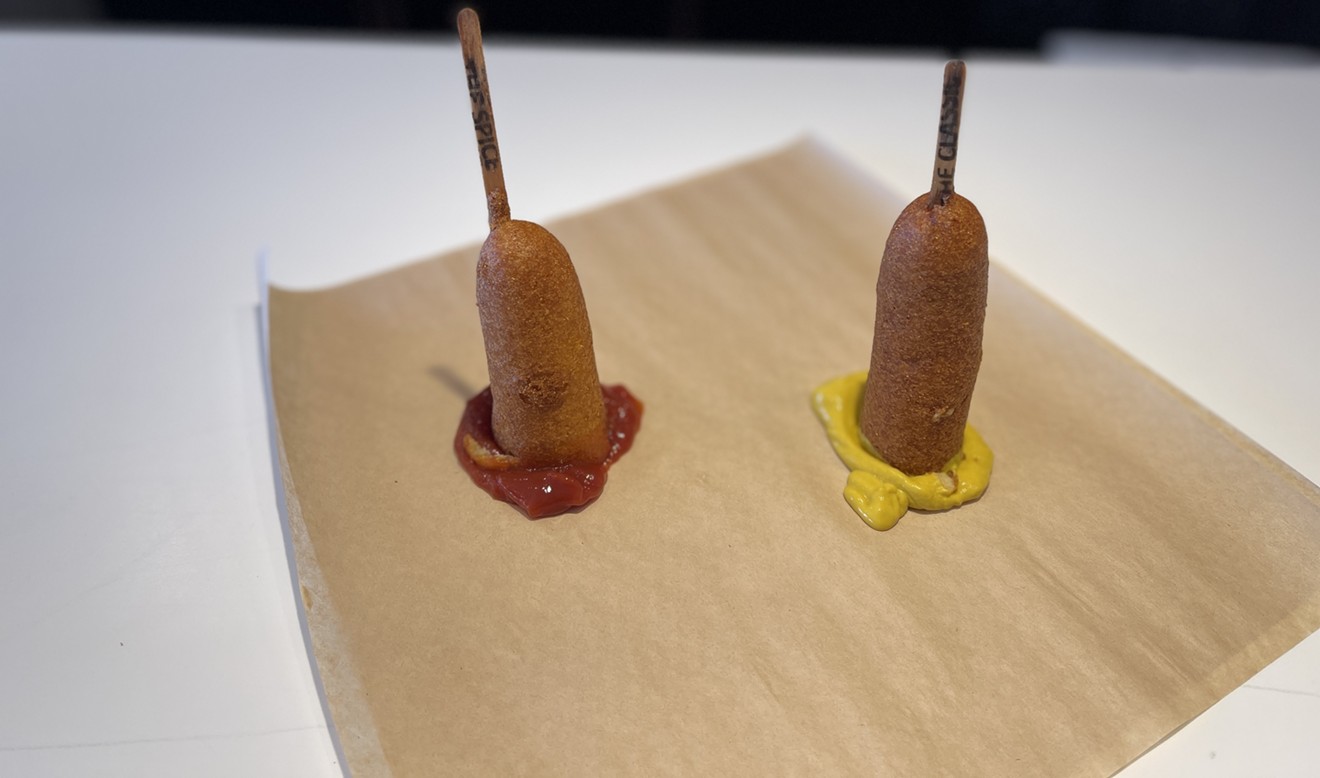 Team ketchup or mustard, it doesn't matter. On National Corn Dog Day this city is all on the same team. Angie Quebedeaux
For anyone who has spent any amount of time in the Lone Star State, you know there is no shortage of amazing food. When people think about food that originated here, the first thing that comes to mind is Blue Bell, chicken fried steak and Tex-Mex.

According to Wikipedia, corn dogs were first introduced to Texas by Germans settlers in the 1920s, although at the time they were made without a stick. And while other purveyors have tried to claim stake to inventing this favorite street food on a stick, brothers Carl and Neil Fletcher introduced the world to their “corny dogs” at the State Fair of Texas in 1942, although discovery and development began as early as 1938.

As we celebrate National Corn Dog Day this Saturday, we've rounded up a list of great places around North Texas to get either the original, a slight variation of the original or some completely off-the-wall rendition you should check out. 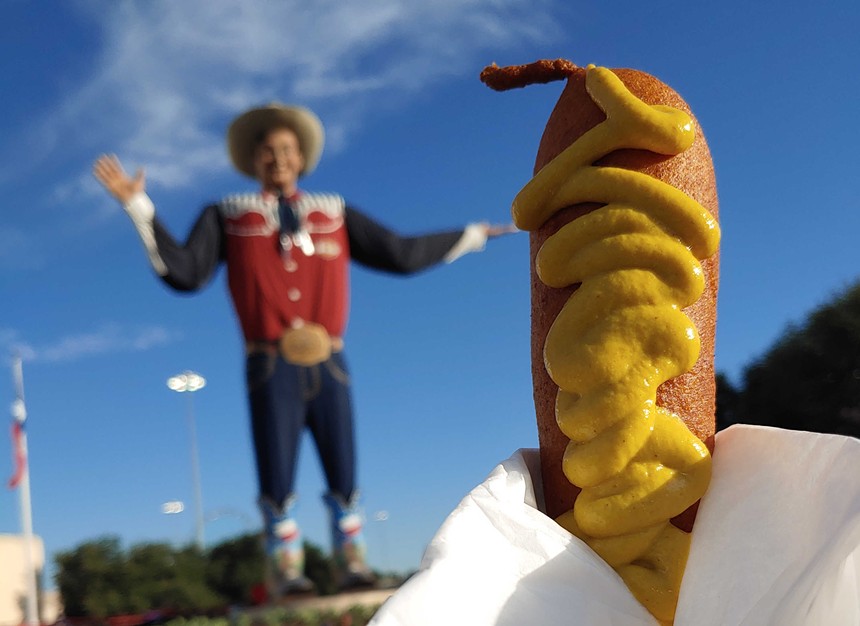 Doyle Rader is on team mustard. As for Big Tex, he's mum on the issue.
Doyle Rader
Prior to the pandemic, you could only get the coveted Fletcher’s Corny Dogs at Texas State Fair. And get them we all did (and still do). They sell about 500,000 corny dogs during the three weeks of the Texas State Fair. But in 2020, when the Texas State Fair was halted due to COVID, the Fletcher family had to pivot and implement plan B. They started offering them at Golden Chick as a limited-time offer, but also bought a few food trailers and now host pop-up events and provide catering services throughout the city.

In addition to the original corny dog, there are other variations available, such as the jalapeño and cheese, the bird dog, the veggie dog, the cheezy pup and the “make mine Texan dog.” They also offer old-fashioned funnel cakes, curly fries, lemonade and deep-fried Oreos. Some corn dog options can also be shipped throughout the U.S. via Goldbelly.

5818 Olive St. (East Dallas)
The corn dogs at Lakewood Landing endure. This corn dog speakeasy is made with Rudolph's sausage and dipped in a housemade beer batter and can be ordered only after midnight, not a minute before, don't even ask.

CornDog with No Name

The Pickle Dog at CornDog with No Name bared all for this photoshoot.
Angie Quebedeaux
Named Best Corn Dog in 2021 by the Observer, mother and daughter duo, Vic and Jace Fletcher (yes, you read that last name correctly) are purveyors of fine stick food at their two restaurants. Of course, they have their signature corn dogs, which include the classic, the spice dog (jalapeño cheddar) and the brunch dog (breakfast sausage dipped in funnel cake batter with bacon and maple syrup). And if you aspire to be “healthy yet indulgent,” they also have turkey or plant-based corn dogs.

What really intrigues us about a CornDog with No Name are their “exotic dogs." Like the Pickle Dog, a classic dog and stuffed it into a whole Best Maid dill pickle that's battered and fried. The combination of savory, sour, and sweet works in weird ways that you can’t imagine until you try it.

Additionally, any of their franks can be infused with Joy Organics pure CBD oil. The CBD is infused via a syringe that distributes it evenly throughout the dog without compromising the flavor of the dog. And let’s not forget about The Queen — their 24-karat edible gold laced corn dog, which is served with a glass of Champagne. Because, why not, right?

On National Corn Dog Day they will be offering their Corn d’Oeuvres (mini corn dogs) for $1 each at their Technology Boulevard location only.

Various locations (Lewisville, Carrollton, and Plano)
Speaking of stepping outside of traditional, we recommend exploring the latest craze when it comes to battered and fried hot dogs on a stick: Korean Dogs. One place to check them out is Oh K Dog. These are different from traditional corn dogs in that they use a rice batter versus a corn batter to coat the dog before frying it. They also add different toppings to the batter (cubed potatoes and hot Cheetos, for example). And you can get a mozzarella cheese stick instead of a hotdog at the center, or half of each. Pair it with one of the sweet or savory seasonings and dipping sauces and you will have the perfect snack on a stick.

Lauren Drewes Daniels
Recently re-opened since suffering fire damage a few months ago, Heim Barbecue is back and ready to serve you some killer corn dogs, and not just on Tuesdays. They’ve now added them to their everyday menu for $6.99 each. These are not your typical Oscar Mayer kind meat. You can choose from jalapeño cheddar, pepper jack, Texas-style or a 44 Farms hot dog dredged in Wild Acre Brewing corn dog batter. Cooked perfectly until golden brown and not greasy tasting whatsoever. They still offer $2 corn dogs on Tuesdays, but only with the 44 Farms hot dog.

A menagerie of corn dog craziness from Two Hands Corn Dogs.
Amy Virden
Two Hands Corn Dog is inside the food court of Asia Times Square in Grand Prairie, which is an entire fascinating culinary field trip. Here you can get meat or cheese corn dogs (or half of each) dipped in fried in a menagerie of toppings. They pack them in these cool takeaway boxes for easy transport. Grab some pastry puffs at Beard Papa while you're there. And some snow chicken at CM Chicken.

8518 Plano Rd. (Northeast Dallas)
If you’re looking for a great twist on traditional corn dogs that go great as a starter with mimosas or an Irish coffee, check out the breakfast dogs at Lochland’s Irish Pub. Available Saturday and Sunday from 10 a.m. to 3 p.m., you will get two breakfast sausage links that have been dipped in pancake batter and served with maple syrup.

Dog Haus Biergarten has a "haus made" root beer batter.
Angie Quebedeaux
Dog Haus Biergarten is a craft-casual joint serving a variety of hand-crafted proprietary Haus sausages, all of which can be used as the centerpiece of your made-to-order corn dog dipped in their “haus made" root beer batter and fried until golden brown. Their mini original corn dogs are about as mini as a Great Dane and the smoked jalapeño cheddar wurst corn dogs are memorable because of the slight kick of flavor from the jalapeños.
KEEP THE DALLAS OBSERVER FREE... Since we started the Dallas Observer, it has been defined as the free, independent voice of Dallas, and we'd like to keep it that way. With local media under siege, it's more important than ever for us to rally support behind funding our local journalism. You can help by participating in our "I Support" program, allowing us to keep offering readers access to our incisive coverage of local news, food and culture with no paywalls.
Make a one-time donation today for as little as $1.