That there, Clark, is a corn dog made with flamin' hot Cheetos. Lauren Drewes Daniels
It was an audacious move, honestly. Luring pandemic-weary citizens with Flamin’ Hot Cheetos beer and corn dogs at noon on a Wednesday, during prime Zoom call time.

Regardless, Martin House Brewing Co. in Fort Worth was up to more of their creative shenanigans with the release of Fiery Crunchy Cheesie Bois 5.2%, a sour beer brewed with Cheetos Crunchy Flamin' Hot Cheese Flavored Snacks.

This time their partner in crime was meat-sicle makers CornDog With No Name, which was frying flamin’ hot Cheetos-battered and dipped corn dogs.

At the time of the official release, a solid cloud cover cast relief on a cooler-than-normal August afternoon. The line for beer started at the brewery door stretched across the parking lot, around a corner, then hair-pinned back. Most imbibers had on masks and, yes, it was a socially distanced line, adding to the length.

One customer explained she had hardly left her downtown Dallas domicile over the past four months, but traveled west and stood in line for an hour just for a four-pack of beer and two corn dogs to go. 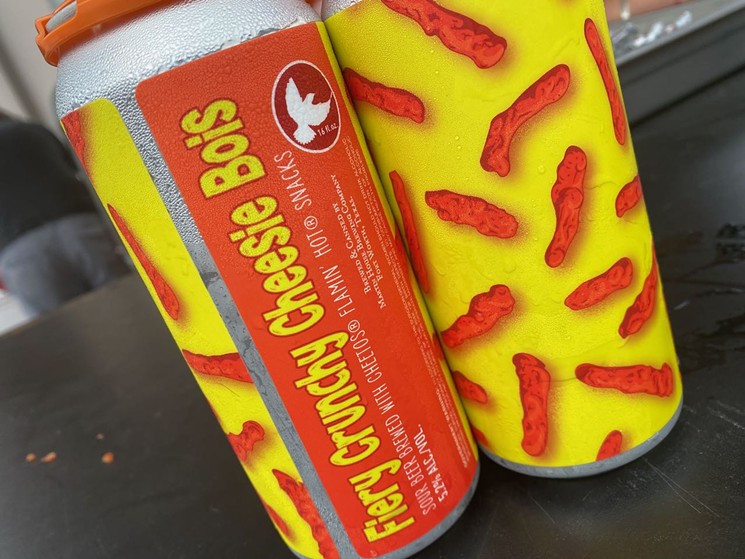 “We deconstructed and then reconstructed the Flamin’ Hot Cheetos through months of rigorous R&D, lab work, scientific tests and many trips to Dave’s across the street. This is a liquid Flamin' Hot Cheetos. There’s not much else to say. You be the judge.”

Sounds like solid science. As of Thursday morning, the brewery does not expect their quickly diminishing inventory to last through the day.

Prior to this release, Martin House colluded with CornDog With No Name and challenged them to create an accompanying corn dog. Those were pretty fantastic.

At first bite, the heat and flavor of the Flamin’ Hot Cheetos were present but balanced by the meat and breading. By the second bite, my mouth was feeling the heat and my face started to get a wee bit hot. After the third bite, I had to find a drink before finishing.

A regular and flamin' hot Cheetos corn dog.
Lauren Drewes Daniels
“I had seen a flamin’ hot corn dog at the Houston Livestock Show and Rodeo last year,” Jace Fletcher of CornDog With No Name says. “It requires a lot of Cheetos smashing to make the dust.”

In addition to rolling the corn dogs in smashed Cheetos before frying, they also lace the batter with the hot snack. The crunch from the Cheetos was the real game-changer here.

Fletcher says they’re not adding this particular corn dog to the permanent menu, but follow their Facebook or Instagram page for alerts about when they’ll have it again. That may be after the orange powder has completely faded from their fingertips.

The ultimate quarantine survival pack? Maybe...
Lauren Drewes Daniels
This weekend, CornDog With No Name will serve bacon corn dogs at their Technology Boulevard drive-thru speakeasy (no signage out front, long story, but it's between Jason’s Deli and Gas Monkey Bar n’ Grill), which is open from 5 to 9 p.m. Friday and 11 a.m. to 9 p.m. Saturday 11 a.m. to 9 p.m.

CornDog With No Name has more pop-ups scheduled:

CornDog With No Name, 10220 Technology Blvd. East (Northwest Dallas). Open 5 to 9 p.m. Friday and 11 a.m. to 9 p.m. Saturdays.
KEEP THE DALLAS OBSERVER FREE... Since we started the Dallas Observer, it has been defined as the free, independent voice of Dallas, and we'd like to keep it that way. With local media under siege, it's more important than ever for us to rally support behind funding our local journalism. You can help by participating in our "I Support" program, allowing us to keep offering readers access to our incisive coverage of local news, food and culture with no paywalls.
Make a one-time donation today for as little as $1.