Huitlacoche quesadillas at Nuno's Anisha Holla
The vegan culinary scene in Dallas is rapidly growing. With more people giving up their favorite dairy, egg and meat products in favor of a plant-based lifestyle, the culinary world has been dropped onto a moving treadmill and forced to adapt. Vegan alternatives have now been absorbed heartily into dishes ranging from your standard American burger to the universally cherished Mexican taco.

Here, we’ve compiled a list of the places that have done it best. 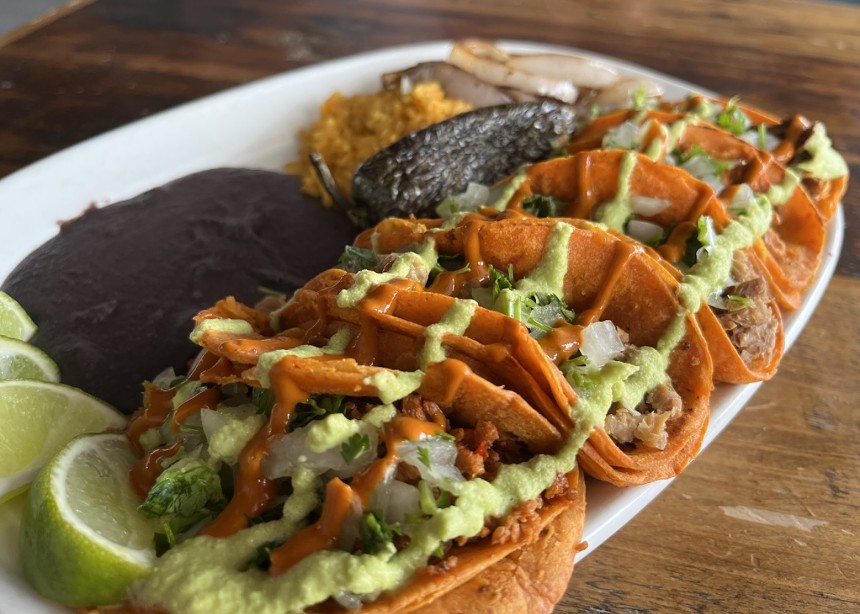 Vegan tacos at Nuno's.
Anisha Holla
This Tex-Mex fusion joint is serving options that reach far beyond the typical Mexican fare. Get your hands on the Tejano BBQ wrap, a tortilla filled with smoked vegetable protein, cheddar cornbread and mac and cheese for a comforting mix of textures. Drizzled in a tangy barbecue sauce made of blueberries and pineapple, the wrap — along with other Nuno’s specialties — lies somewhere in the middle of the wide spectrum between American and Mexican cuisine. The huitlacoche quesadillas are yet another example of Nuno’s culinary creativity, consisting of a crunchy pan-fried tortilla stuffed with fresh Mexican truffle and housemade mozzarella cheese. Crunchy meets soft, meets smoky, meets cheesy in this all-inclusive Mexican dish.

Nuno’s also rotates out vegan versions of Mexican favorites like birria tacos made of roasted hibiscus flowers and oat-based Marranito (Mexican molasses) shakes. All ingredients are sourced fresh from growers in Mexico and beyond.

“We focus on high-quality, healthy ingredients,” owner Nuno Arias Jr. says. “We’re not so much focused on expanding as we are on taking care of the customers we already have.”

And the quality of the food here is evident. Whether you're full-time vegan, part-time committed, or just plain curious, Nuno’s food will have you returning back for more. Plan a heavy meal here, as Vegan Food House’s menu places a big emphasis on all things deep-fried. Start your meal with the boudin balls, which are generously stuffed with vegan sausage, onions, peppers, and rice. The balls are then breaded and deep-fried for a crisp and buttery outer later. There are tree balls to an order, enough for sharing — or eat by yourself. They don’t judge.

Another customer favorite is the shrimp and grits, a vegan take on a Southern classic. This one has grilled vegan shrimp atop a bed of cheese grits. The plate is topped with peppers, tomatoes and onions to create a perfect balance of protein, dairy and vegetables. What sets Project Pollo apart from others in Dallas’ growing vegan-friendly list is its ability to replicate the taste and texture of chicken meat. Whether you bite into their Chickn wing drenched in herby garlic sauce, a nice fried Chickn salad wrap or even a spicy Chickn sandwich, this fast-casual eatery’s proprietary vegan recipe has both the texture and flavor of the real deal. With high hopes to save the environment and revolutionize the fast-food industry, Project Pollo’s vegan Chickn is a must try. Opened since February, Casa Del Vegano appeals to a growing number of Americans who have adopted vegan or vegetarian diets.
Steven Monacelli
Casa Del Vegano is another vegan Mexican concept. Try the chimichanga, a slightly modified version of a fan-favorite Mexican dish. It's deep-fried and loaded with Beyond beef, black beans and salsa, making for a particularly difficult game of "find the impostor." It’s even topped with a vegan chili con carne for added authenticity.

Other vegan twists on Mexican favorites include nachos, enchiladas and, of course, meaty street tacos. This Pepto-pink spot has the typical American burger stand fare, sans the meat.
Anisha Holla
Zonk Burger first started selling their burgers from the back of a food truck in 2019. Since then, they've opened their own hot pink brick-and-mortar location in the heart of Fort Worth. Covered in cute rainbow-colored decor, Zonk Burger is the first fast-casual eatery in Fort Worth to serve a fully vegan menu.

Favorites include seitan wings, tofu nuggets and smoked green beans. Their signature burgers come with meat substitutes ranging from black bean and millet to mushroom and walnut. All burgers are drenched in Zonk Burger's rave-worthy special sauce, which is made with boiled chickpeas.

If you happen to stop by on a Sunday, grab some of their special vegan biscuits or chocolate donuts on the way out. You'll likely find yourself snacking the entire car ride home. 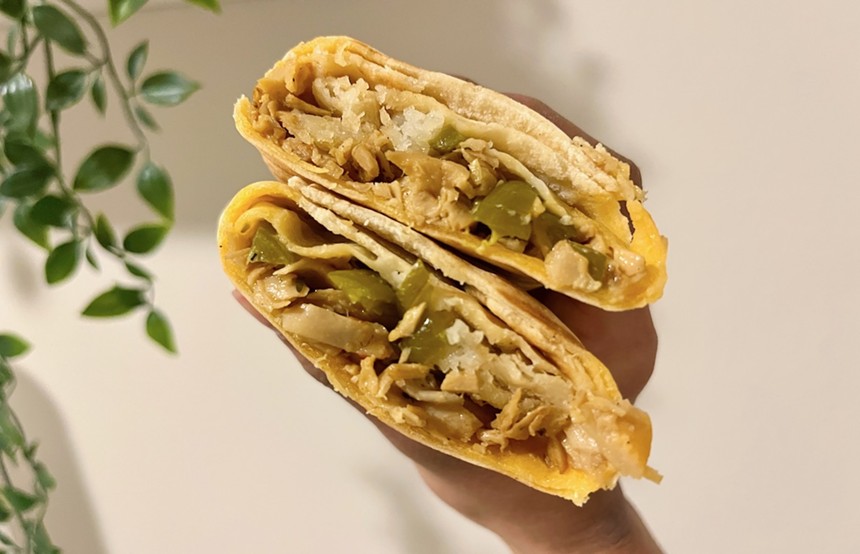 Start with a sandwich like the Gyro Rocket or Chicken Rocket Sandwich, both which come generously slathered in a house-made (vegan) gyro sauce. They also have vegan salads and rice bowls. Regardless of what you order, the restaurant’s faux meats are an applaudable emulation of the real thing. Finish off your meal with a slice of baklava, a flaky phyllo pastry filled with honey-soaked nuts. Feel free to indulge. It’s all vegan.
KEEP THE DALLAS OBSERVER FREE... Since we started the Dallas Observer, it has been defined as the free, independent voice of Dallas, and we'd like to keep it that way. With local media under siege, it's more important than ever for us to rally support behind funding our local journalism. You can help by participating in our "I Support" program, allowing us to keep offering readers access to our incisive coverage of local news, food and culture with no paywalls.
Make a one-time donation today for as little as $1.