The Bison Burger with Swiss cheese and onion rings at the Bison Bar and Grill for $13.50 Nick Rallo
You may have a question or two that needs answering. The first question, “Which one is the Bison Bar and Grill?” is easy: It’s the one with the life-size bison statue standing on the gate. The entrance is around back, facing away from the rush of Ross Avenue. The Scorpions' “No One Like You,” as head-bangingly '80s as the painting of the multicolored buffalo on the glass-tiled wall, plays over the speakers as the door to the dim bar swings open.

The other question you’ll likely want answered with relative speed is about the deep-fried testicles: The Bison Bar and Grill has a “Rocky Mountain oysters challenge,” and the menu invites you to ask about it. What is it? It’s beautiful beef calf balls, deep-fried and jumbled up in an “F.U. sauce” sparkling with the Carolina Reaper and ghost peppers.

Eat six bull beanbags in four minutes, and you’ll get to sign the wall. On a more serious note, $10 of each challenge goes to the Kamil Patel Memorial Scholarship. Kamil Patel was one of bar owner Tim Tremoni’s best friends; Patel was killed last year in a horrifying act of violence in Miami. The memorial fund is ready for donations without the challenge of downing Rocky Mountain oysters, of course. 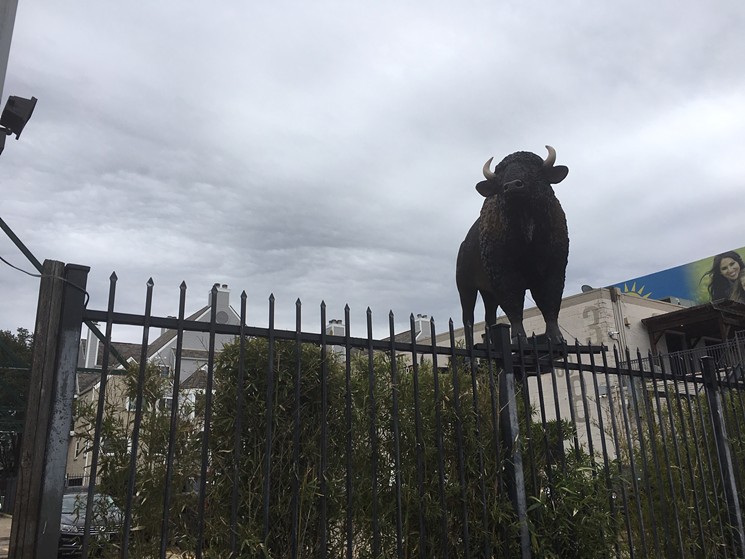 The Bison Bar and Grill, if you're trying to find it, is the one with a bison perched atop the gate.
Nick Rallo
Inside the dining room, glam metal continues. You know this bar already; it’s the bisoned version of your favorite '80s bar. The pool table, the arcade games and the marquee scrolling with brightly lit, daily updates are just beyond the reach of the bar counter. Saddling up, the Bison Burger shows up on a metal tray, Swiss cheese melted on the griddled patty.

The bulk-grind is hand-formed at the Bison Grill, dusted heavily with a “Tatanka” mix of salt, pepper, cumin and garlic powder (among other secret seasonings). The flavor is big as the blue sky and is unmistakably, in the best way, bison. It’s got richness — ask for medium-rare for a glimmering, juicy center — and good salt. A caddy of sauces stands nearby: Do not pass up the blackout-good ranch dressing. Too few onion rings were provided for this sauce. The interior at Bison Bar and Grill
Nick Rallo
The chicken-fried bison steak, available on the weekends, has become a quick hit. You’ll soon find it on the daily menu. There are more things to bison, of course, including bison chili, tacos, dumplings and a new kind of viscous “bison water.” That last one was a joke, but you get the picture. The burger will set you back $13.50 — for the price, a few more onion rings wouldn’t be out of line. The toppings — lettuce, onion and pickle — could have been better dressed, sliced and assembled. The patty was cooked expertly.

It’s easy to picture yourself returning for arcade and chicken-fried bison. Also, there’s a $32 bloody mary that may just be Dallas’ only cocktail with deep-fried testicle skewered atop it. It’s the bar with the giant bison statue, after all.

Bison Bar and Grill, 3030 Ross Ave.
KEEP THE DALLAS OBSERVER FREE... Since we started the Dallas Observer, it has been defined as the free, independent voice of Dallas, and we'd like to keep it that way. With local media under siege, it's more important than ever for us to rally support behind funding our local journalism. You can help by participating in our "I Support" program, allowing us to keep offering readers access to our incisive coverage of local news, food and culture with no paywalls.
Make a one-time donation today for as little as $1.
Nick Rallo
Contact: Nick Rallo