Stephanie Kuo
Nothing against IHOP or Denny’s, but sometimes when you go out for breakfast, you just want a plate of bacon and eggs that taste and feel like a labor of love. That’s exactly what you’ll get at Eddie’s Diner, which opened in Plano one month ago.


"The diner concept is classic America; that’s what we’re all about. That’s what our food is about." — Lydia Miftari

This cozy diner on a quiet strip off Parker and Preston roads is a family affair. The owners are a husband-and-wife team, and not only is the restaurant named after their 17-year-old son, but the pair also comes from a line of successful restaurateurs.

“I grew up in this. My dad did this for 50 years, and it’s just what our family does,” says owner Lydia Miftari, who is originally from the Chicago area and has owned three other restaurants outside Texas. Lydia’s brother owns the Frisco Diner off the Dallas North Tollway and Main Street in Frisco.

At Eddie’s, the menu is extensive, but it hits all the comforts of a classic homemade breakfast, with everything from omelets and Benedicts to French toast and pancakes. There are also Eddie’s signature skillets, which are breakfast bowls filled to the brim with hash browns and topped with two eggs cooked to order. The Porky Pig Skillet, for example, appears to be a delectable tableau of ham, sausage, bacon, cheddar and sausage gravy. 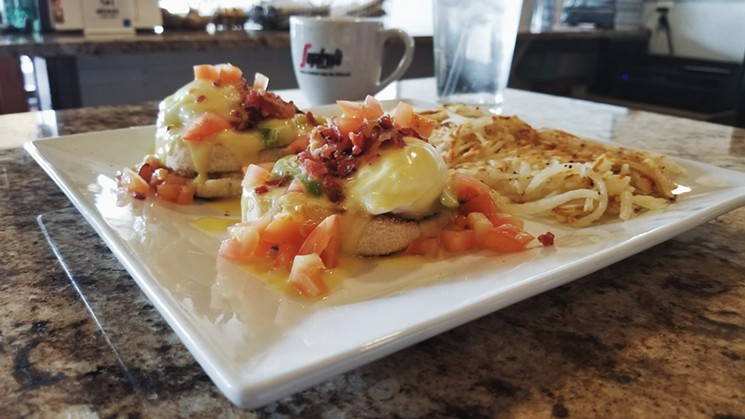 The B.A.T. Bennie is one of the most popular dishes for a reason.
Stephanie Kuo
The most popular dish, as suggested by the staff, is the B.A.T. Bennie: bacon, avocado and tomato stacked high on a fluffy English muffin and comfortably coated in a Hollandaise sauce that won’t weigh you down for the rest of the day. It’s a fresh take on a decadent classic and definitely earns its keep in the high ranks of Eddie’s menu. There’s also a lunch spread featuring the diner usuals: burgers, sandwiches, salads and soups of the day. Miftari’s husband, Bekim, leads the kitchen.

“I want my customers to feel like they’re sitting in my kitchen at my house,” Miftari said. “The diner concept is classic America; that’s what we’re all about. That’s what our food is about.”

The restaurant’s mantra is “making memories over meals.” It’s written right on the front page of the menu, and that’s exactly what Eddie’s strives to do. On the restaurant’s Facebook page, Miftari writes about her fondest memories in her family’s restaurant, watching her father befriend just about everyone who walked through the door and making people feel welcome and at home. With that enduring foundation in family and community, Eddie’s has something for just about everyone. And it’s all topped off with attentive service from a kind and doting waitstaff that’s eager to chat and refill your cup of always-hot coffee. 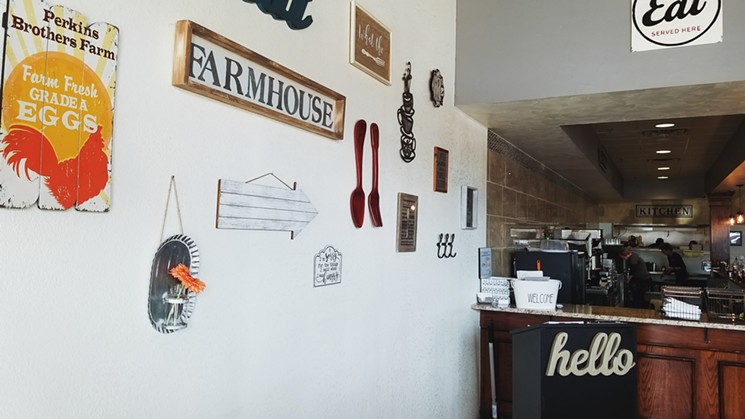 Homey Americana vibes fill Eddie's Diner in Plano.
Stephanie Kuo
It’s easy to see how much of an impression Eddie’s has made on the area after just over a month. Nearly all of the 18 or so tables are full before noon on a Thursday, and there’s a constant stream of families, friends and co-workers by lunch. Miftari said it’s this busy almost every day.

Eddie’s serves its hearty breakfast menu every day from 7 a.m. to 2:30 p.m. — a schedule that allows the owner to spend more time with their son, who will be graduating from high school next year.

KEEP THE DALLAS OBSERVER FREE... Since we started the Dallas Observer, it has been defined as the free, independent voice of Dallas, and we'd like to keep it that way. With local media under siege, it's more important than ever for us to rally support behind funding our local journalism. You can help by participating in our "I Support" program, allowing us to keep offering readers access to our incisive coverage of local news, food and culture with no paywalls.
Make a one-time donation today for as little as $1.
Stephanie Kuo
Contact: Stephanie Kuo