Even Without Much of a Dining Room, Nate’s BBQ To-Go Is a Hidden Gem in Carrollton If you happen to see this sign on a trailer while traveling through Carrollton, stop in immediately; killer barbecue awaits. Chris Wolfgang
We should have stopped at Nate’s BBQ To-Go much sooner. We spotted the sign a few months back while driving down Hebron Parkway near SH 121 in northwest Carrollton, and it looked promising — especially the smoker in a trailer out front, spewing out smoke. We made a mental note to check it out one day.

That mental note was refreshed recently while perusing the neighborhood social media site Nextdoor. Most of the commentary in my neighborhood’s Nextdoor is pretty inane — just last week, one neighbor swore she saw a wolf walking down her back alley. Nevertheless, after the would-be wolf sighting, another conversation caught my eye: Someone was asking for opinions on local barbecue favorites. Suddenly, much of the neighborhood was singing the praises of Nate’s.

Nate’s is legitimate take-out barbecue. It is possible to eat at Nate’s — there’s a small two-top and a picnic table inside — but the real treat of Nate’s is getting some quality barbecue and enjoying it in the comfort of your own home, or wherever your travels take you. Dining in is an option at Nate’s BBQ To-Go, albeit an unpopular one.
Chris Wolfgang
And quality is the right word. Nate is cranking out seriously good barbecue from his smoker/trailer and serving it up from behind the counter of his small storefront. The barbecue hits are all fairly represented on the menu, and meats come as part of a plate or by the half-pound. A one-meat plate with two sides will set you back a reasonable $12, or $4 more will add a second meat. All the plates include a canned soda, too. We went with a one-meat plate with chicken, a two-meat plate with brisket and ribs and some sides. In just a few short minutes, our food was boxed up and we were back on the road.

Meats are kept warm in foil pans with cardboard tops, and the sides are served in small Styrofoam cups. You could be a savage and tear into the food directly from their containers, although you probably shouldn’t do it while driving. Or you can plate it up at home and trick your friends and family into thinking you slaved away for hours making dinner. How casual or classy you want to make it is up to you, but the food is terrific any way you cut it.

Our two-meat plate was made up of three thick slices of brisket and two meaty pork ribs, both of them stars. The brisket was a supremely good balance of smokiness and seasoning in the bark, was pull-apart tender and had a perfectly trimmed fat cap that locked in the beefy flavor. The pork ribs were also flavorful and well cooked — not quite fall-off-the-bone tender, but still quite good. On the other plate, the quarter chicken was a juicy delight under the charred smoky skin, literally dripping with flavor. Not that any of the meats need it, but Nate’s includes their own sauce in to-go cups as well, a tangy blend that paired well with any of the meats we dunked in it. 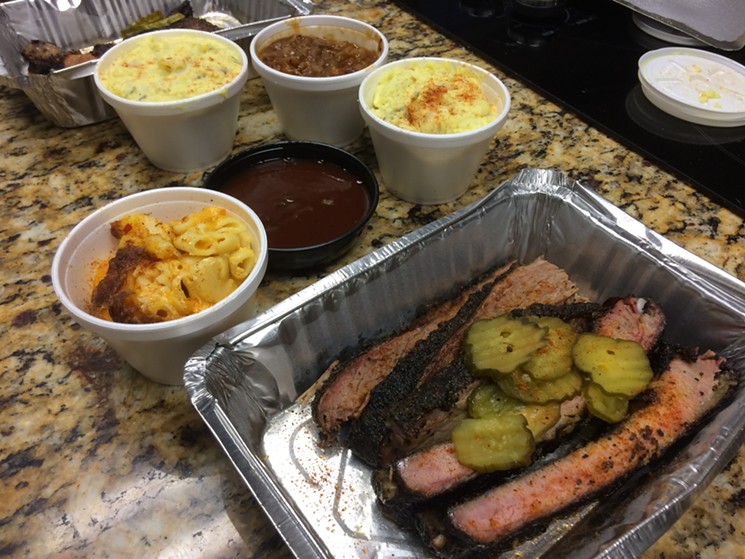 It’s hard to put a price on enjoying good barbecue in the comfort of your own home. But Nate’s can try.
Chris Wolfgang
The side choices on Nate’s menu are few: barbecue beans, mac and cheese, potato salad and fried okra that was noted on a piece of paper taped next to the in-store menu. If the lack of choice seems like a negative, rest assured that the sides we tried were top notch. Chunks of brisket populated the beans, and the potato salad was a homemade mustard style that will feel like a summer picnic in your mouth. The mac and cheese had been baked to a golden brown, and the sharpness of real cheddar cheese shined.

Obviously, you’re not taking business clients or a first date to a take-out spot. But short of that, we can’t find any reason not to recommend a visit to Nate’s, whether you’re in the area or not. There’s a lot of fine barbecue to be had in our fair city, and the smoked meats being churned out from this little trailer and strip mall in Carrollton certainly belong in the discussion.