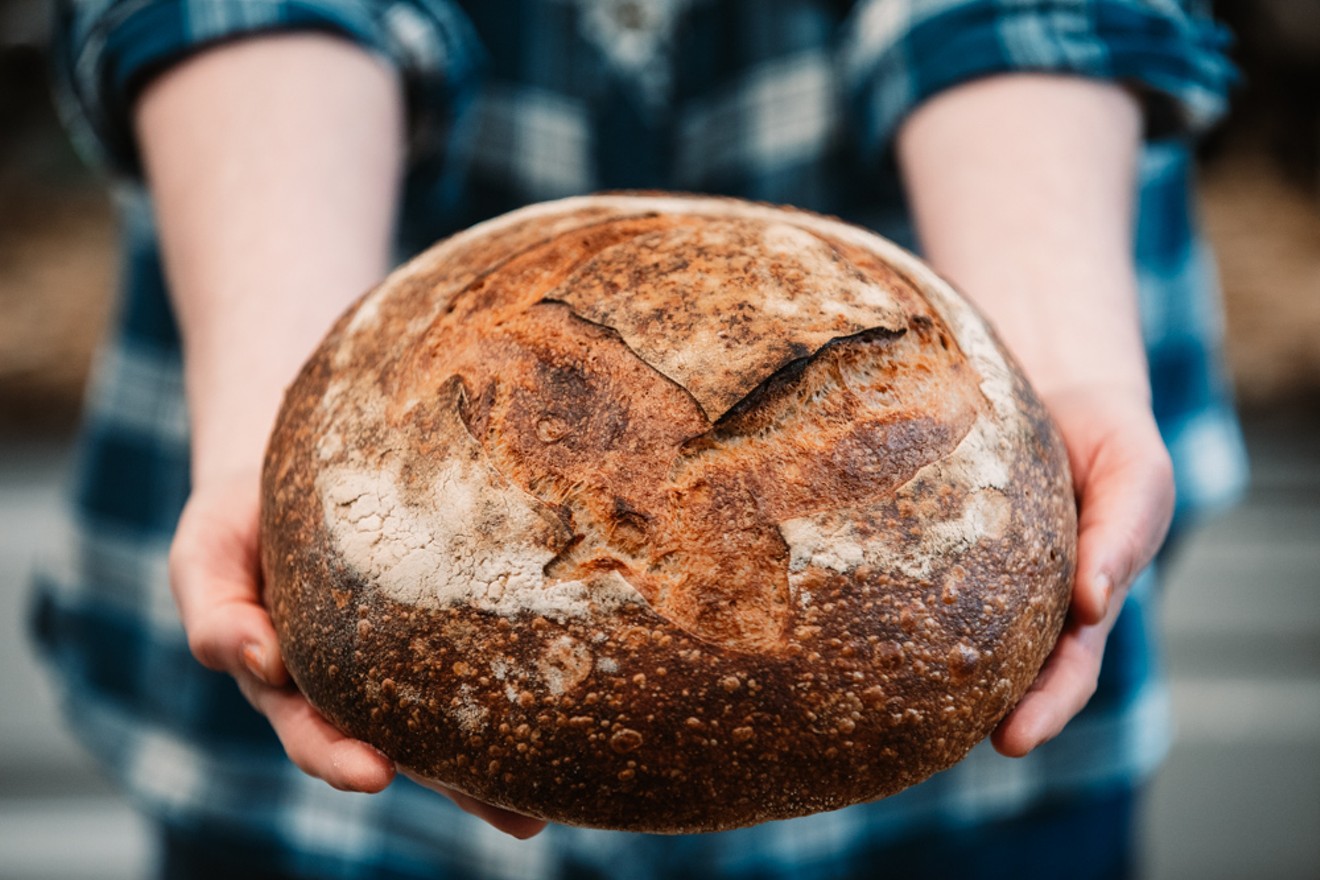 Is the sourdough craze still a thing? Because this rustic loaf from Bresnan's Bread and Pastry proves it's more than just a fad. Chris Wolfgang
For a couple who just opened the storefront to their small bakery and are likely running on very little sleep, Matt and Jenna Bresnan should look exhausted, but it's hard to miss the smiles on the Bresnans' faces.

"Yeah, it's been pretty crazy," Jenna says when asked if she's gotten any sleep. "But we're just so excited to be here."

"Here" is Bresnan Bread and Pastry, the namesake bake shop just off the square in McKinney's quaint downtown area. The Bresnan's have lived in McKinney for seven years. Matt has been baking in commercial and shared kitchens in Dallas since launching online via preorders in January 2020, which meant working around the schedules of everyone else. 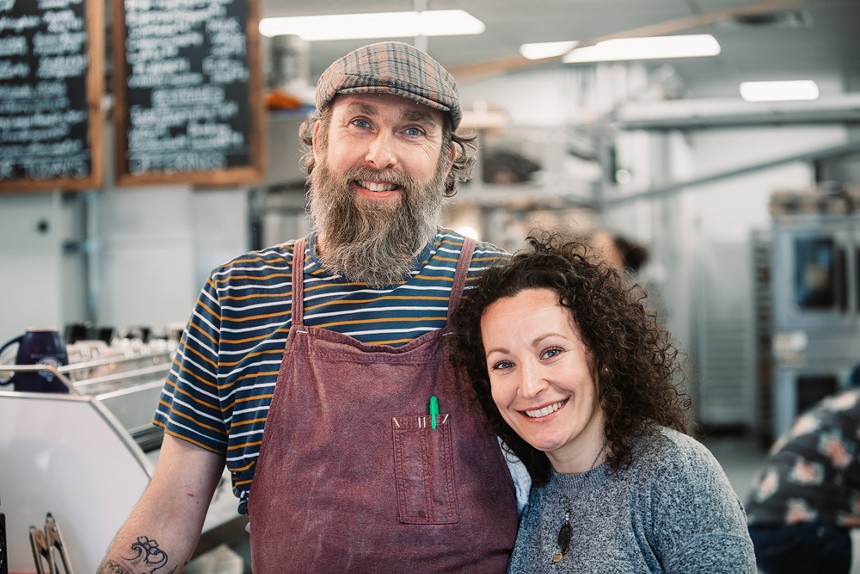 Matt and Jenna Bresnan's dream of a brick and mortar bake shop is finally a reality in McKinney.
Chris Wolfgang
"I had to wait until everyone else was done to get our baking done, so I would sleep until 6 p.m., then get up and drive to Dallas," Matt recalls. "So being here in McKinney, it's going to be nice to have the hours of a more normal baker."

We stopped by Bresnan's downtown McKinney location for their grand opening on Feb. 26. Despite the threat of rain and sleet, a steady stream of customers found their way into the small establishment. A glass display showcases the day's pastries, and ordering takes place at the next counter. Between the two counters, a string separates customers from the employees.

"We still need a door here, and there's some trim work that needs to be done," Jenna explains as we stand between the counters. "But we wanted to get people in the door and get going."

Matt explained that the original hope for this brick-and-mortar location included space for tables for customers to enjoy coffee and a pastry. But launching a business just two months before the global pandemic forced the Bresnan's to rethink how much work they wanted to take on.

"There were doubts about how our entire industry would survive," Matt says.


For now, Bresnan's Bread and Pastry is a grab-and-go establishment. After signing the lease on the storefront on Louisiana Street, Jenna and Matt had a healthy amount of remodeling to do to the space. There were floors to be refinished, electrical upgrades to be made and equipment to move in. The supply chain issues that seem to affect everyone hit Bresnan's as well, and the planned opening in the fall of 2021 slipped to February. The Bresnan's tackled much of the work themselves while still running an online-only preorder business that has developed a loyal following, as well as supplying baked goods to restaurants like Local Yokel and Al Biernat's. 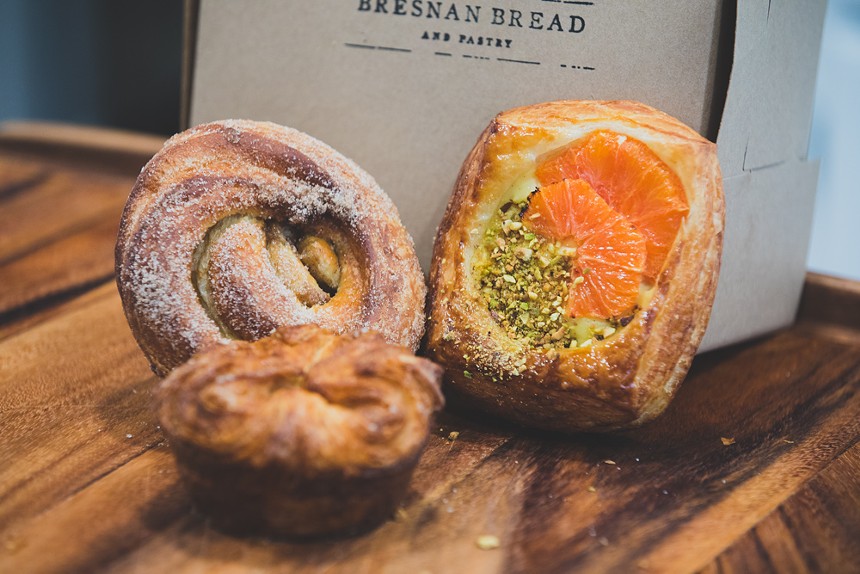 Orange cardamom morning buns, kouign amanns and an orange and pistachio danish with a vanilla cream filling are just a few of the delights available from Bresnan Bread and Pastry.
Chris Wolfgang
Preordering each week is still an option, but now that the space is open, it's easy to stroll in and grab a caffeinated beverage and some baked goodness to go. Bresnan's coffee offerings are supplied by Noble Coyote Roasters, and there is a drip coffee, espresso, latte or cappuccino. We grabbed a loaf of rustic sourdough ($9) to take home for the weekend, but couldn't resist the scent of the tangy bread and found ourselves slicing into nearly as soon as we got home. The chewy crust encases pillowy bread that skillfully nails all the sourdough marks.

As remarkable as we found the sourdough, the other pastries from Bresnan truly shine. Matt makes a different dough for each of his creations, so the morning bun's texture (with the hint of citrus and cardamom) hits just a bit differently than the vanilla-cream danish topped with orange and pistachio. Both were a delight. Muffins, brownies and cookies are available in addition to the pastries, and range from $3.50 to $5.50.

And then there are kouign amanns ($5), the buttery-flaky-sweet concoction that lives in our food editor's dreams. We've sung the praises of places like Bisou Bisou, La Casita and Swiss Pastry Shop for rising to challenge of making the elusive kouign amanns, and are thrilled to report Bresnan's as another exquisite version. Matt Bresnan's skill and artistry in laminating pastry is on full display, as if he were Rembrandt working with butter and dough instead of oil paints.

For the time being, Bresnan's Bread and Pastry is open on Saturday mornings. Preordering is still an option, which cuts off at noon on Tuesday for Saturday pickup in Dallas (150 Manufacturing St., #215, The Design District, from 9 to 11 a.m.). The shop will open at 7 a.m. each Saturday. Eventually, Matt would like to see the shop open as many as six days a week, but wants to take their time in expanding.

Bresnan's Bread and Pastry, 301-B E. Louisiana St., McKinney. 7 a.m. to 2 p.m. Saturdays.
KEEP THE DALLAS OBSERVER FREE... Since we started the Dallas Observer, it has been defined as the free, independent voice of Dallas, and we'd like to keep it that way. With local media under siege, it's more important than ever for us to rally support behind funding our local journalism. You can help by participating in our "I Support" program, allowing us to keep offering readers access to our incisive coverage of local news, food and culture with no paywalls.
Make a one-time donation today for as little as $1.