Under a New Chef, José’s Upscale Mexican Fare Has Leveled Up

The posh patio at José in Park Cities Alison McLean
José didn’t have to improve itself. The Park Cities crowd quickly adopted it as a favored Mexican food destination, and once the Park Cities crowd likes a restaurant, it doesn’t need to serve good food to keep their attention. José could have coasted for years by riding the pocketbooks of older Anglos with valeted BMWs who want to tuck into taco salads and $17 enchiladas.

But give this Lovers Lane restaurant credit: It wants to serve good food. Eighteen months after opening to an instantly slammed dining room — thanks in part to celebrity-studded preview parties — José hired a new executive chef, Anastacia Quiñones-Pittman, and gave her leeway to add her own inventions, including ceviches, aguachiles and tacos with flavored-masa tortillas. 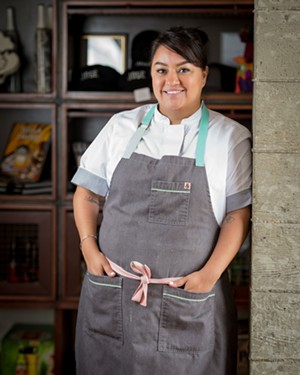 Chef Anastacia Quiñones-Pittman
Alison McLean
Read between the lines on José’s menu, and it’s clear that this is, in fact, two menus. There’s the Quiñones stuff, and the other stuff. The other stuff tends to be safe and sedate: Tex-Mex for people who heard from Dr. Oz that all that cheese is bad for cholesterol. The Quiñones stuff, though, reveals a creative chef doing delicious work. Her twists make José worth visiting for those of us who live outside the Park Cities bubble.

Quiñones’ vision is especially clear in the two rotating specials, which change with her inspirations. One, the seasonal aguachile ($14), is a chilled, marinated preparation of raw fish, which her kitchen typically pairs with some kind of fruit. On my first visit to the “new” José, the aguachile married thick cubes of ahi tuna to slivers of pineapple, serrano peppers and red onions, all built like a fortress around a central pool of tamarind glaze. The flavors in general tilted heavily toward the tropical — the dish tasted like a beach was nearby.

Quiñones’ other specialty at José is the tacos de tacha, which she brought along from her pop-up dinner series around Dallas. “Tacha” can mean a blemish or fault, or it can denote the prohibitive red X symbol, but in this case it is more personal: the chef’s nickname growing up, short for Anastacia. She was occasionally Tachita, too. 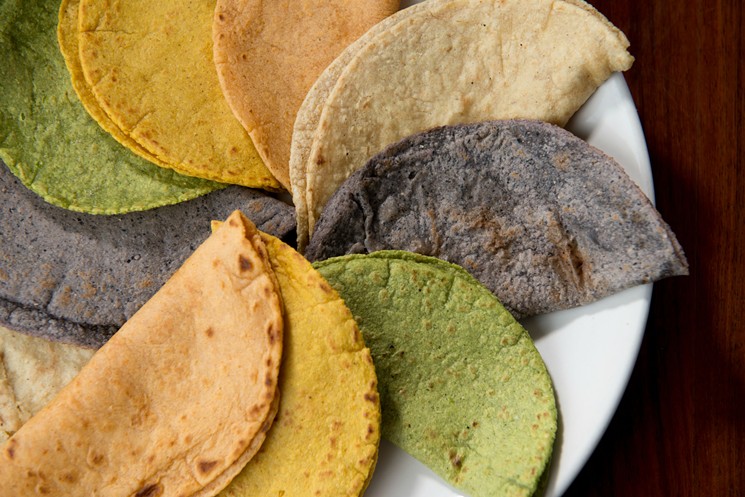 Quiñones-Pittman is known for her flavored masas.
Alison McLean
The attention-getting feature of a taco de tacha is the flavored corn tortillas, but the fillings are just as intriguing. On my first visit, a cilantro-spiked tortilla was the canvas on which José’s kitchen added tempura-battered enoki mushrooms — fried so lightly they were almost fluffy — slivers of pickled radish, dots of habanero crema and a handful of nasturtium leaves ($16 for two). So what’s the blemish? I actually wouldn’t have minded fewer mushrooms — the taco was so heavily loaded it was hard to eat.

On my next visit, the tortillas were flavored with habanero — emphasis on flavor; the pepper’s spice took a backseat to its fruity sweetness. The centerpiece of the filling was fried soft-shell crab, topped with a light showering of pickles: pickled cucumber, pickled onion, pickled carrot, pickled radish. Delicious.

The tacos de tacha come with rice and beans, but there is not much reason to eat them.

One of the best appetizers at José, and certainly the best bargain, is the $12 smoked salmon and avocado combo. The bowl turns out to be enormous: practically a whole fillet of salmon, very lightly smoked and perched atop avocado slices, with a small pool of mango habanero aioli alongside. The dots of fiery chile de arbol salsa are perfect accents.

Short rib carnitas
Alison McLean
Another appetizer that could easily satisfy a party of four, or serve as a rustic main course, is a platter of carnitas made from beef short ribs ($19), cut across the bone to produce bone-in riblets ribboned with fat. Go ahead, throw some into one of the soft, and softly aromatic, corn tortillas made in house. The meat and tortillas are perfect on their own, but a side scoop of lightly pickled (and heavily cilantro-tossed) carrots, cauliflower and onions is a nice complement to the fatty beef.

Quiñones’ mole is a work in progress, literally. It’s also one of the more fascinating moles in town.

“The mole is an aging mole,” the chef says. “When we get low, we make a new batch and combine the old one to it.” The result is a flavor profile that can change over time as the sauce matures. “Today it’s sweet, spicy and nutty, but next week it could be spicier and less sweet. I didn’t want to do the same one every time.”

When I ordered the mole, on day 63 of the sauce’s history and after at least 10 new batches had been made, it swung heavily toward the chocolatey end of the spectrum, with a soft undercurrent of bitterness. It was served then on an enormous slab of chicken — half the bird, deboned and seared for crispiness ($22). It’s a portion big enough for two people, and the fact that it may taste subtly different next week is an enticement to keep regulars coming back.

Jose’s dining room
Alison McLean
Not everything is so good as the carnitas, tacos and smoked salmon. Our order of carrot habanero soup, for $6, was mostly just regular, well-seasoned carrot soup. The soup comes with “chochoyotes,” a sort of fried masa dumpling. At least, that’s what I’ve read online and in other reviews. Our bowl had none.

A waiter seemed deathly afraid that we would declare the carrot habanero soup too spicy, even though it is not spicy at all, and repeatedly checked back with us to ask if our taste buds had been overwhelmed. The same thing happened again with another course. This must be the cost of selling good Mexican food to the older, whiter diners of the Park Cities. (By the way, true heat lovers will thrill to the serrano puree, which waiters bring out in tiny glass flasks.)

A small mound of queso de cabra, topped with candied walnuts, is plenty nice, but my main memory of the dish is how nicely the bread was toasted ($12). And we were sorely disappointed by a round of churros for dessert ($8), served with a thin, metallic, distinctly unpleasant chocolate dipping sauce, which was not dark enough to be dark and not sweet enough to be milk.

José is a place to skip dessert, for now. It’s also a place to drink straight liquor only; there’s a long list of mezcals and tequilas available by the shot. Not all of the bottlings are good-quality stuff from small growers, but they are better on average than the sweetened, tamed, dull house cocktails. Mezcal cocktails, in particular, are designed for people who hate mezcal. Does the drinks menu use adjectives like “skinny” and “squozen”? Of course it does.

Tuna tostadas
Alison McLean
The main attraction here is the Mexican food magic being worked by Quiñones and her team in dishes like the carnitas, tacos de tacha, aging mole and aguachiles. Quiñones and her thoughtful, chef-y riffs on traditional cuisine have bounced around town for a few years now, making brief appearances at restaurants like Cedars Social and Kitchen LTO. Here’s hoping she has found a longer-lasting home this time. And here’s hoping José’s habitual, risk-averse clientele can keep up with her.

Jose, 4931 W. Lovers Lane. 214-891-5673, jose.mx. Open Sunday and Monday 11 a.m.-9 p.m., Tuesday through Thursday 11 a.m.-10 p.m., Friday and Saturday 11 a.m.-11 p.m.
KEEP THE DALLAS OBSERVER FREE... Since we started the Dallas Observer, it has been defined as the free, independent voice of Dallas, and we'd like to keep it that way. With local media under siege, it's more important than ever for us to rally support behind funding our local journalism. You can help by participating in our "I Support" program, allowing us to keep offering readers access to our incisive coverage of local news, food and culture with no paywalls.
Make a one-time donation today for as little as $1.