Souffle au fromage. Alison McLean
Whether you realize it or not, much of what you experience when dining out has its origins in France. Restaurants themselves are a relatively modern creation and, notably, a French one (the word “restaurant” is derived from the French verb restaurer, to provide food for). The etymology doesn’t stop there; chefs, menus, cuisines and much more of the culinary lingo all trace their roots to the French language.

Then there’s the perception that French cuisine is always of the highest quality. We subconsciously hold chefs who train in France in high regard, as if cooking is an immutable part of the French identity. That perception also lives in American psyches but is manifested in different ways, where too often we associate French cuisine with stuffiness, arrogance, overpriced fare or some combination of the three. Thankfully, Dallasites have Knox Bistro to show off the best that French cuisine has to offer in a much more approachable fashion.

Chef Bruno Davaillon stepped away from Bullion at the beginning of 2020, and in 2021 he quietly partnered with fellow Frenchman and restaurateur Stephan Courseau of Travis Street Hospitality to take the reins of the brasserie Up On Knox. When Davaillon arrived, much of the Up On Knox menu and staff were already in place. Earlier this year, Up On Knox got a reboot as Knox Bistro, with more of Davaillon’s fingerprints on the finished product. 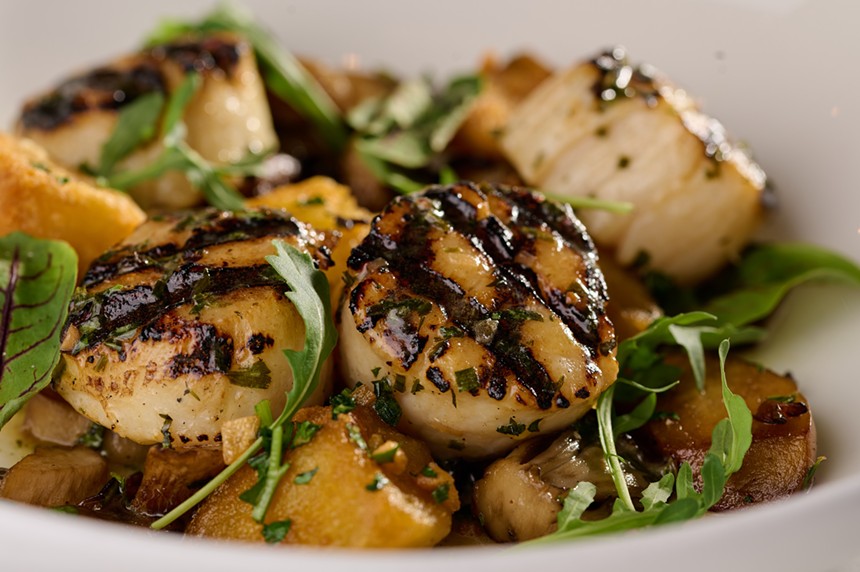 Saint-Jacques Grilles — grilled day boat scallops, with bearnaise butter, potato and wild mushrooms.
Alison McLean
Knox Bistro’s focus leans toward French country, inspired by Davaillon’s roots in France’s Loire Valley. Aside from French titles for every dish, the menu feels eminently welcoming, with a focus on high-quality ingredients that are seasonally appropriate — the waiter on our most recent visit shared that a menu update for the fall is coming soon — yet beautifully and simply prepared.

Take the potato, an uncomplicated starchy vegetable that we’ve all eaten in dozens of dishes and have likely given little thought to. It finds its way into several of Knox Bistro’s entrees, and here the potato is a revelation. Bite-sized pieces are roasted to a slightly crispy exterior with a touch of garlic and rosemary, revealing an absurdly light and fluffy interior.

By themselves (you can order a side of them for $9), the simplicity of the potato shines; each bite marries bits of herb and starch with crispy and fluffy textures that will have you forever rethinking lesser tubers. But when they appear in dishes like the grilled scallops ($38), the potatoes pick up flavors of butter sauce or mushrooms that make up the dish. And the scallops themselves are grilled to perfection, mildly briny and nutty, each succulent bite just a bit better than the one before it, flavors melding into something magical. Poulet fermier dans son jus — free-range roasted chicken with mashed potatoes.
Alison McLean
There are also potatoes to be found in the chicken fricassee ($28), available only on Wednesdays as part of the cast of rotating weekly specials. There’s a half chicken in the bowl, potatoes soaking up the flavors of the vinegar and wine sauce that coat each bite. The skin-on chicken is elegant in its simplicity, nary a bite overcooked, whether you prefer the white meat of the breast and wings or the darker legs and thighs.

So much of the food at Knox Bistro follows the same model — ingredients that aren’t at all complex but are so brilliantly executed that they taste like something new and fresh. Opening with a cheese soufflé ($21) before our meal on our first visit sets the perfect French tone, the soufflé rising in its cast iron skillet with delicate authority, each bite a cheesy cloud that evaporates in the mouth. The soufflé arrives with a simple butter leaf lettuce and radish salad, dressed with a dill vinaigrette that whispers instead of shouts. Rillettes de Poisson — smoked fish dip with trout roe.
Alison McLean
On another visit, our waiter suggested we start with the rillettes de poisson ($14), a smoked fish dip that’s served with slivers of crisped baguettes. The creaminess and smokiness in the dip are nearly above reproach, with bits of celery and radish to provide a crunchy counterpoint and delicate trout roe adding to the visual and gastronomic appeal.

Fish and seafood make up a large portion of Knox Bistro’s menu, and we failed to find a weak link. There’s a whole branzino ($38) prepared on a wood grill, then topped with an olive tapenade. The fish, flaky and mild, is given a salty zing from the tapenade that speaks French with an Italian accent straight from the Mediterranean. But if seafood isn’t your thing, Knox Bistro’s wood grill will turn out a delicious pork chop ($46) cooked exactly how you like it. We ordered ours medium, and it arrived with a perfect rich pink center, sliced off the bone and splayed across the plate with a tangy mustard sauce on top and a flavorful side of mushroom and pea ragout. The chocolate souffle is worth the wait.
Alison McLean
Order sparingly, and you might have room for dessert. The chocolate soufflé ($14) should be considered a mandatory order. Expect to wait 10 to 15 minutes for it to arrive at your table, and use that time to brace yourself for the experience. If you’re like us, you will still struggle for the words to describe it. Light yet rich, chocolaty yet still bright, it might be the essence of French cooking, bordering on a religious experience.

And what is French dining without wine? Knox Bistro makes no mistake here, with two dozen options by the glass. Reds naturally dominate, but whites and sparkling wines are well represented, with all but a handful priced under $20 per glass. When the weather is nice, the windows and doors are open at Knox Bistro.
Alison McLean
Perhaps the best part of the Knox Bistro experience is just how relaxed everything feels. The space itself is bright and airy, lit by floor-to-ceiling windows that might be opened if the weather agrees on your visit. Wicker-backed chairs give a touch of Old World style, while more casual linens and plates complete the French country feel. The service is smart, and despite what felt like a staff of three waiting on us on both of our visits, we never feel rushed or smothered by the attention.

Many of us have long thought of French restaurants as the domain of the upper class, full of tuxedoed waiters serving food, the elegance and lifestyle beyond our reach. Perhaps we can blame 1980s movies like "The Blues Brothers" or "Ferris Bueller’s Day Off" for reinforcing the stereotype.

But allow us to present Knox Bistro as the counterpoint. Yes, a $100 meal for two might be something best saved for special occasions for many of us (lunch and brunch offer similar brilliance with more values on the menu). But there are lessons to be taken from dining at Knox Bistro. Davaillon and his team show us that French food and technique are really that good, even when it’s delightfully simple. It’s even better when it’s presented with the casual elegance that is Knox Bistro’s calling card, and you don’t need to be Abe Froman, the Sausage King of Chicago, to enjoy it.