On Waiver Wednesday, S&J’s Hot Chick Pays You to Eat Their Tenders You, too, can sign up for the $3,000 reward. All you have to do is eat pepper x. Desiree Gutierrez
Dallas will eat just about anything for a Polaroid on a restaurant wall, a free T-shirt or bragging rights. S&J’s Hot Chick is upping the ante. Every Wednesday the spot in Northwest Dallas offers challengers $3,000 and a PS5 if they can complete the Waiver Wednesday challenge.

For a $25 entry fee, the challenge requires contestants to eat three double-battered chicken tenders with toast in seven minutes, all while on S&J’s Instagram live feed. The kicker is the tenders are dipped in ghost pepper extract and then seasoned with S&J’s hot, extra hot and damn hot seasonings. Of more than 500 contenders, fewer than 10 have completed the Waiver Wednesday challenge.
Desiree Gutierrez
Need some water with that, hon? Each swig leads to a $100 deduction.

The tenders are so hot that S&J's requires challengers to sign a waiver. Many are willing to overlook that for an attempt at a lavish prize.

“When I opened the restaurant, at the time, there were a lot of hot chicken concepts opening and I wanted to be able to separate myself from all other competition,” S&J’s co-owner Javi Nabors says.

The restaurant opened in March 2021. The challenge began with a $150 prize that gradually grew to $3,000 for each successful challenger. Nabors threw in a PlayStation and unreleased Nike shoes to entice entrants. Co-owner Javi Nabors opened his chicken restaurant in March 2021 and has steadily made the chicken challenge more difficult.
Desiree Gutierrez
“The challenge caught on like a wildfire and everybody started coming in trying to win the prize,” Nabors says. “It created a buzz and that’s where we got a lot of our social media following from. Most people end up pouring milk all over themselves and screaming and hollering and just making a big scene. A lot of people tune in for that.”

Through the challenge, the restaurant has garnered 15,500 followers on Instagram. Followers flock to the live streams to poke friendly fun at challengers and watch with angst as the tenders bring the darers to tears and the spices demolish their digestive systems.

Until recently, only 7 of 539 contenders had succeeded. As the prize grew, the heat also intensified with each winner.

S&J’s chicken tender master, Mr. Bobby, added pepper x to the latest adaptation of the Waiver Wednesday challenge. Pepper x is the world’s hottest pepper. This version has seen 300 unvictorious challengers. That was until July 13.

That day, the eighth Waiver Wednesday victor was crowned. He had came straight from Canada to complete the challenge.

“I’ve had some real hot wings, and I’ve done the one chip challenge, but those were a cakewalk compared to this,” Canadian food influencer and competitive eater Joel Hansen told the Observer before the challenge.

On his YouTube channel, he’s taken down 20 pounds of ice cream in front of 477,000 subscribers. He even chomped through a 14-pound steak that nearly sent him to the hospital, but none of that compared to what he was in for at S&J’s.

With headphones in his ears and Pepto Bismol and milk on deck, Hansen stood nose-to-tender with the thick, powdery, steamy basket of death-by-heat as Mr. Bobby smiled deviously from the kitchen. Once 100 people had joined the live stream, Nabors said go. It was game time.

Masked in placid determination, Hansen strategically shed the batter and attacked the protein. Six minutes and five seconds later, that determination contorted into a crimson, snotty, blistered and damn near bloody triumph. 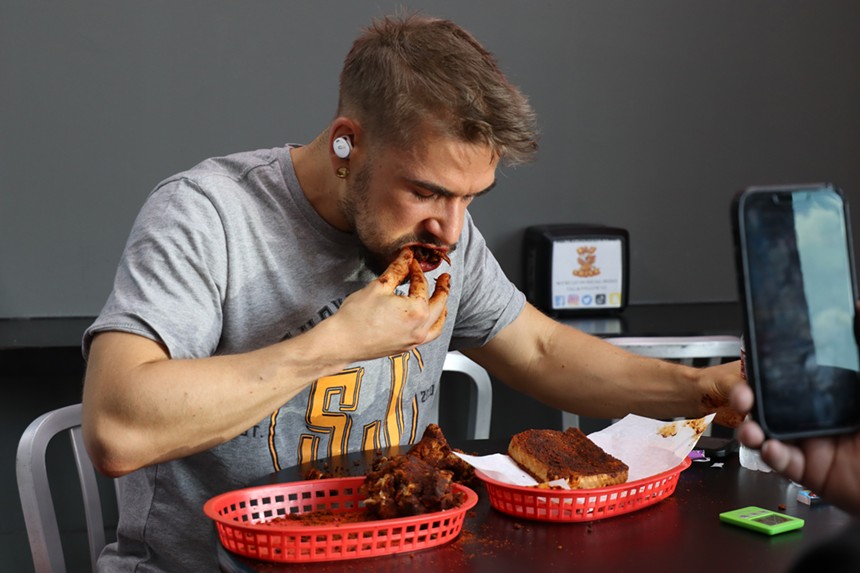 YouTuber and competitive eater Joel Hansen flew in from Canada for S&J's Hot Chick competition.
Desiree Gutierrez
Instead of a victory lap, Hansen dove into an adjacent sink and doused his mouth in water. Then, he sprinted — with milk in hand — to the "milk cemetery,” a section to the left of the building Nabors has designated for people to “do what they need to do.”

For Hansen, that meant vomiting his guts out and submerging his hands into ice-filled gloves. His knee, face and hands swelled in red blotches from contact with the seasoning.

“Pepper x is not made to eat,” Hansen says. “It's made to borderline be mace.”

Part of Hansen’s winnings will go to a children’s charity, he says. As for another spicy challenge, he’s up for it. But another Waiver Wednesday? “Heck, no,” he said.

Since Hansen's win, 47 courageous eaters have signed up for the challenge. Those interested in participating can sign up by direct messaging S&J's Instagram account. For those who prefer some help, S&J’s offers a tag team option. Two people can split the meal with the same regulations for a shared $1,000 prize. Water is off the table for both challenges after Hansen’s win.

“It takes a special type of human being to beat the challenge. I've witnessed over 300 people lose it, some of the spiciest eaters in the city, and they couldn’t do it,” Nabors says. “It took one guy from Canada to come and beat the challenge.”

S&J's Hot Chick, 2201 W. Northwest Highway, Suite 120, 11 a.m. – midnight, Sunday – Thursday; 11 a.m. – 4 a.m., Friday and Saturday.
KEEP THE DALLAS OBSERVER FREE... Since we started the Dallas Observer, it has been defined as the free, independent voice of Dallas, and we'd like to keep it that way. With local media under siege, it's more important than ever for us to rally support behind funding our local journalism. You can help by participating in our "I Support" program, allowing us to keep offering readers access to our incisive coverage of local news, food and culture with no paywalls.
Make a one-time donation today for as little as $1.