Lamb pressé with muhaammara. Lauren Drewes Daniels
The Village is one of Dallas' most iconic neighborhoods. Since its inception in 1968, it's been a place for early 20-somethings to live and frolic. While Dallas is dotted with planned communities now, such as the Harwood District, downtown and Deep Ellum residences, The Village is the OG.

And as the space has matured over the decades so have the amenities. The area recently underwent a major redevelopment. Bulldozers took down old structures and in their place sprouted a glistening and fresh utopia with shiny new apartments, green spaces, sports fields, a pool with a swim-up bar, a boutique hotel and some notable restaurants.

We've often written about Meridian, which is led by chef Junior Borges (who is also the VP of culinary at The Village), with a menu that shines a light on dishes from his native Brazil. It was added to our Top 100 Restaurants this year.

Just a stone's throw from Meridian's patio is Anise, on the bottom floor of the Drey Hotel, which opened last year as part of the renovation. Here, a bar and dining room are surrounded by floor-to-ceiling windows, and diners can enjoy a pan-Mediterranean menu and a curated wine program in a stunning space. 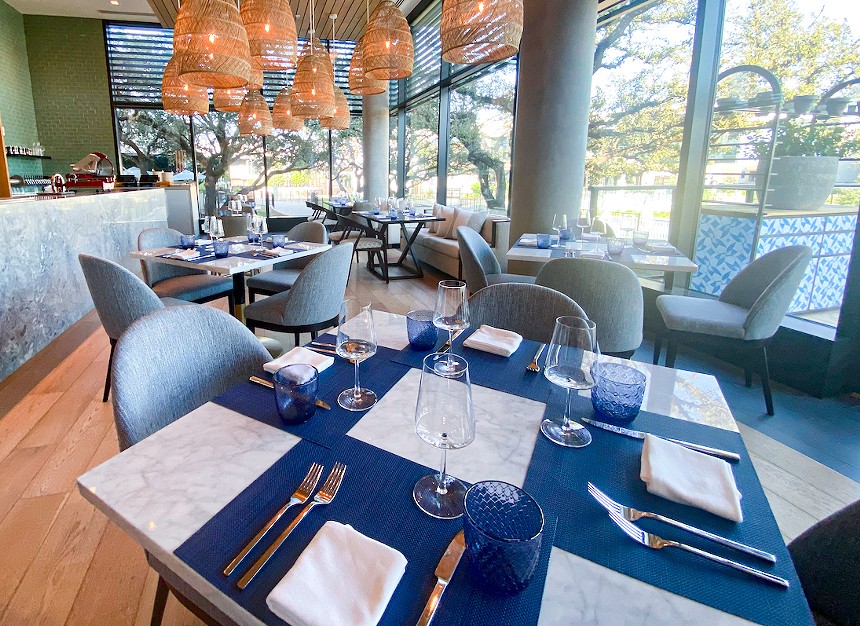 The dining room is at the back of the hotel overlooking a lawn area, the pool and large trees.
Lauren Drewes Daniels
Chef Rene De Leon Jr. was recently announced as the new executive chef at Anise, and he made some changes to the menu. De Leon previously worked at Alinea in Chicago for seven years, as well as at Next and Aviary, also in Chicago. His resume includes French Laundry (Napa Valley), Eleven Madison (New York City) and Noma (Copenhagen). More recently has was an executive chef at the now-closed French restaurant Bullion.

One thing we love about any place at The Village is the people-watching opportunities. The main area is primarily pedestrian (one road that runs through was partially closed during our visit) with a menagerie of people and activities. At the end of dinner, no less than 50 Villagers were wrapping a group yoga session on the lawn while others were out walking their dogs. 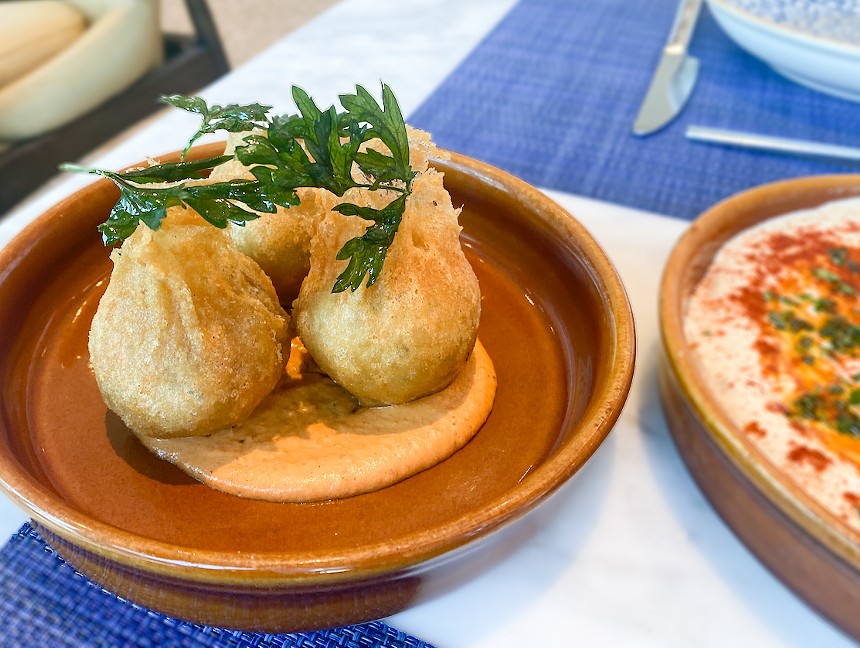 Bacalao fritters over a tomato aioli.
Lauren Drewes Daniels
We were recently invited for a media preview at Anise to try the new menu. We started dinner with bacalao fritters ($14), which are popular snacks at markets in Spain. A light and crisp crust holds cod and potatoes like a cinched purse. Three of these are plated over a tomato aioli. Once cooled off, these are lovely appetizers brightened with a touch of lemon.

While the whipped ricotta topped with grilled fruit, pistachios and mint is a popular (and eye-catching) starter at Anise, we instead went with the hummus ($10) topped with a green chermoula, a spice-heavy paste-like relish with coriander, parsley and cumin adding depth of flavor and texture.

Crispy octopus.
Lauren Drewes Daniels
Octopus ($22), from the small plates section of the menu, has paper-thin crispy crust that swaddles tender tentacles. It's served in a bowl with Pimenton and gigante beans. This dish almost has a tapas feel — light and good for sharing small bites.

For a heavier main we went with a lamb pressé ($38), braised lamb shoulder literally pressed into a rectangle served with a burnt red muhammara dip that is both smoky and sweet. Tender chunks of lamb fall from the small slab with the touch of a fork. The dish is topped with crisp Moroccan carrots and okra. This, too, might be ideal to share at the table.

Chef De Leon got part of his inspiration for this pressé while working in Dubai. "When I tasted muhammara for the first time, I knew I wouldn't leave Dubai without the recipe," he says. "Since then, it has been in my back pocket until getting to Anise."

Back in Texas while planning menu updates for Anise, he needed a lamb dish, and he found a home for the muhammara.

"Chef Junior Borges and chef Nick Walker had thrown out some ideas for lamb preparations when we were discussing the dish, and pressé was one of them," De Leon explains. "At that point, I added field peas cooked simply and crispy okra for color contrast and texture to the plate. The one spin I added was to swap pomegranate molasses traditionally found in muhammara with slow-roasted strawberries."

The Mediterranean-focused wine list is curated by sommelier Amelia Henderson, who began her career as a maitre d' at Gramercy Tavern, which is part of the Union Square Hospitality Group. While there, she participated in daily wine training sessions for the family of restaurants, which included 11 Madison Park. On Wednesdays, all by-the-bottle wine selections at Anise are half off.

Chef De Leon is a big-name addition to the marquee at Anise, which has a captivating menu and equally stunning space.

Anise: 5630 Village Glen Drive, 3 p.m. – 10 p.m. Tuesday – Thursday; 3 p.m. – 11 p.m. Friday; 10 a.m. – 3 p.m., 5 – 11 p.m. Saturday; 10 a.m. – 3 p.m., 5 p.m. – 10 p.m. Sunday; closed Monday.
KEEP THE DALLAS OBSERVER FREE... Since we started the Dallas Observer, it has been defined as the free, independent voice of Dallas, and we'd like to keep it that way. With local media under siege, it's more important than ever for us to rally support behind funding our local journalism. You can help by participating in our "I Support" program, allowing us to keep offering readers access to our incisive coverage of local news, food and culture with no paywalls.
Make a one-time donation today for as little as $1.