With permitless carry now law, restaurants need to understand the nuances of the law, including new signage. Sarah Schumacher
Restaurants and bars linger at the intersection of culture and politics. Usually, we pass through, noticing little else than what’s in front of us. Other times — like recently — a quagmire evolves.

When the pandemic hit, one of the biggest shocks to our systems from a social standpoint was the closure of these establishments. We soon realized that we took the food, drinks and service for granted. As things started to reopen and customers eagerly returned to their pre-COVID ways, a curious thing happened: These social spaces became arenas where different belief systems duked it out. Maskers and anti-maskers bellied up, challenging rules on adversarial turf. Some restaurants closed for the good of the herd or strictly enforced mask requirements or social distancing, while others packed patios and served margaritas.

During this time, servers at restaurants and bars have been forced to run interference in a scheme they never wanted a part in. Many left the industry and found other career paths. Luring those workers back has been an ongoing struggle.

Now a new plate has been added to their overstacked trays. On Sept. 1, Texans were allowed to carry handguns without acquiring a state permit.


Kevin Lawrence served in law enforcement for 22 years. After retiring from active duty, he joined the Texas Municipal Police Association (TMPA), the largest law enforcement association in the state, where for the past 11 years he’s been the executive director.

During his time in uniform, Lawrence often dealt with people who were carrying handguns. “If they said they were LTC [licensed to carry], when they handed over that license I had a sense of relief because I knew they’d been vetted,” he says with emphasis on his last word.

Part of Lawrence’s role with the TMPA now is to work with legislators as bills are introduced that relate to law enforcement. When permitless-carry legislation was brought before this legislative session, he had one question:

“If they said they were LTC [licensed to carry], when they handed over that license I had a sense of relief because I knew they’d been vetted." — Kevin Lawrence, Texas Municipal Police Association

“What problem are you trying to solve?” Lawrence asks. “We opposed all of these bills. Some of them were worse, and we got those corrected, but we believe this is bad public policy.”

After a summer of protests in the streets over the murder of George Floyd, Republican lawmakers arrived in Austin with a "law-and-order" agenda. Part of that was House Bill 1927, which allows permitless carry.

The New Law and Order
Until Sept. 1, carrying a handgun in Texas, either concealed or openly, required a license from the Department of Public Safety. Individuals had to be 21 years old and pass a background check that looked for things like felony convictions, repeated controlled substance abuse, unpaid child support and protective restraining orders. Four hours of classroom or online training was required along with a demonstration of basic shooting proficiency.

Lawrence says this basic training served a purpose. As he put it, some handgun owners, “couldn't hit a bull in the ass with a bass fiddle.”

Now, that’s all gone. No more sense of relief. No more vetting. No basic training.

Firearm purchases from a licensed gun dealer still require a background check, but purchases through private sellers don’t require vetting of any kind.

A study by the American Public Health Association looked at how easing access to concealed firearm permits has affected homicide rates. It found that the rates were 11.7% higher in “shall issue” states, meaning those that require carry permits but grant them to anyone who meets set criteria (for example, Texas before Sept. 1). The study “suggests that there is a robust association between shall-issue laws and higher rates of firearm homicides.”

Texas has now gone one step beyond "shall issue," abandoning permits and the minimal amount of training and vetting they required. (People prohibited by law from possessing a weapon, such as convicted felons, are still banned from carrying guns.)

A Republican-leaning poll conducted earlier this year by UT Tyler and The Dallas Morning News found that 64% of respondents said they do not support carrying a handgun without a permit. Another Texas Tribune and UT Texas poll found that 59% of Texans opposed it as well.

Yet, permitless carry passed through the Legislature and was signed by Texas Gov. Greg Abbott.

Lawrence said the final bill was better than an initial version that would have prevented officers from even questioning a person based solely on their possession of a handgun. 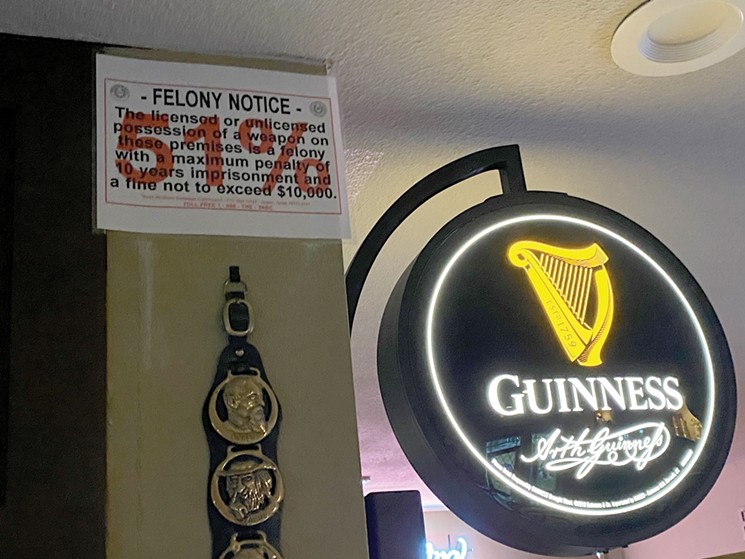 This red "51%" sign still applies to bars and prohibits any guns on the property.
Lauren Drewes Daniels
Impact for Restaurants
Restaurants and bars are distinguished by one number when it comes to firearms: 51. Any establishment that derives at least 51% of its profits from on-premise alcohol sales must post a sign issued by the Texas Alcoholic Beverage Commission that has bright red “51%” across it. This tells customers they're in a bar, where firearms are prohibited on the property.

The TABC said in a statement to the Observer that “the prohibition against carrying handguns at businesses which are required to display the red handgun warning sign remains. Handguns may not be brought onto those premises, with exceptions for peace officers, licensed security personnel or business owners/managers.”

During the pandemic, however, many Texas bars shifted their business operations and began serving more food so they could remain open while bars were ordered closed. Those former bars received food and beverage permits and could no longer earn most of their profits from selling alcohol. They also couldn't count on a simple "51%" sign to tell customers that guns weren't allowed. According to the TABC, they’ll now need to have a different family of signs if they want to ban firearms.

“If the business holds a food and beverage permit, they wouldn’t be eligible to display the red sign, so handguns could be brought onto the premises unless the business chooses to disallow it,” wrote the TABC.

Restaurants, non-51-percenters, have three signs to choose from now. One refers to penal code 30.06, which prohibits concealed handguns; penal code 30.07 prohibits the open carrying of handguns; and penal code 30.05 covers criminal trespass for entering with a firearm. Some restaurants have already posted the 30.05 sign with the words “No Permitless Carry'' at the top. All three signs mean no guns on your property.

Private property owners still have that right. When open carry of handguns passed in Texas in 2015, Whataburger’s then-president and CEO issued a letter stating that even though he was an avid hunter with a concealed-carry license, his employees and customers aren’t comfortable being around someone with a visible firearm. He banned them from his restaurants. Richie Jackson, the CEO of the Texas Restaurant Association (TRA) at the time, told The Day then that “gun rights do not trump property rights.”

Kelsey Erickson Streufert, vice president of government relations and advocacy with the TRA, confirms that while bars that meet the 51% threshold will still need a red sign, the remaining restaurants “retain their right as private property owners and managers to set the handgun policies that are best for their business.”

The TRA encourages restaurants to discuss their plans with employees and make sure their signs are up to date.

Hale points out that Texas is the 21st state to allow permitless carry. He plans on allowing permitless carry in his restaurants so long as the guns are concealed, which has always been his policy. But he is opposed to open carry. “If you’re openly carrying you’re really just showing off,” Hale says.

He’s even asked police officers to conceal their guns, and when they respond, “But I’m a cop,” he asks them to display their badges. Otherwise, he requests they conceal their firearm because he understands they make customers nervous.

Hale has also seen firsthand that restaurants have been on the front lines of every political issue lately. “But this one,” Hale says, “I truly think it’s not going to be an issue.”

One stipulation of the new unlicensed carry law, however, is that anyone who is in violation of posted gun signs must be given a warning before being asked to leave. That means managers, owners and servers will need to inform gun-carrying customers they need to take their pistols elsewhere.

Restaurant owners and servers are already chary over confronting customers about wearing masks, with some complaining they'd been dragooned into enforcing state mandates. Presumably, they're not going to be thrilled at the prospect of confronting a customer about a gun.

The TMPA’s Lawernce has advice for restaurants on this point.

“Make sure you’ve got your signs posted properly,” Lawrence says. After that, he recommends calling the police. “Issue the warning with the police there. Then, the warning is documented.”

Warren Mitchell with the Dallas Police Department says the DPD is prepared to uphold the laws.

“Restaurant owners and citizens carrying weapons should familiarize themselves with every aspect of the law, particularly to the requirements pertaining to public establishments,” Mitchell said in the statement to the Observer.

“As an agency, we are currently not providing any training pertaining to the permitless carry law,” Mitchell continued. “Again, it’s important that restaurant owners and citizens carrying weapons familiarize themselves with the laws surrounding permitless carry and use that knowledge to determine if law enforcement is needed. However, restaurant staff and patrons should always call law enforcement if a disturbance becomes apparent.”

Lawrence says this is why he didn’t like the law to begin with: Texans are expected to know the rules, but no one is actually required to take any formal training to learn them.

“The police will enforce the law to those who don’t understand the law,” says Lawrence before adding with a sigh, “Poor ol’ cops are the ones who will have to break the news.”

Or worse, a restaurant worker. Not enough tips in the world for that job.
KEEP THE DALLAS OBSERVER FREE... Since we started the Dallas Observer, it has been defined as the free, independent voice of Dallas, and we'd like to keep it that way. With local media under siege, it's more important than ever for us to rally support behind funding our local journalism. You can help by participating in our "I Support" program, allowing us to keep offering readers access to our incisive coverage of local news, food and culture with no paywalls.
Make a one-time donation today for as little as $1.