To Have a Good Meal at Richardson’s Busy Kirin Court, Skip the Dim Sum 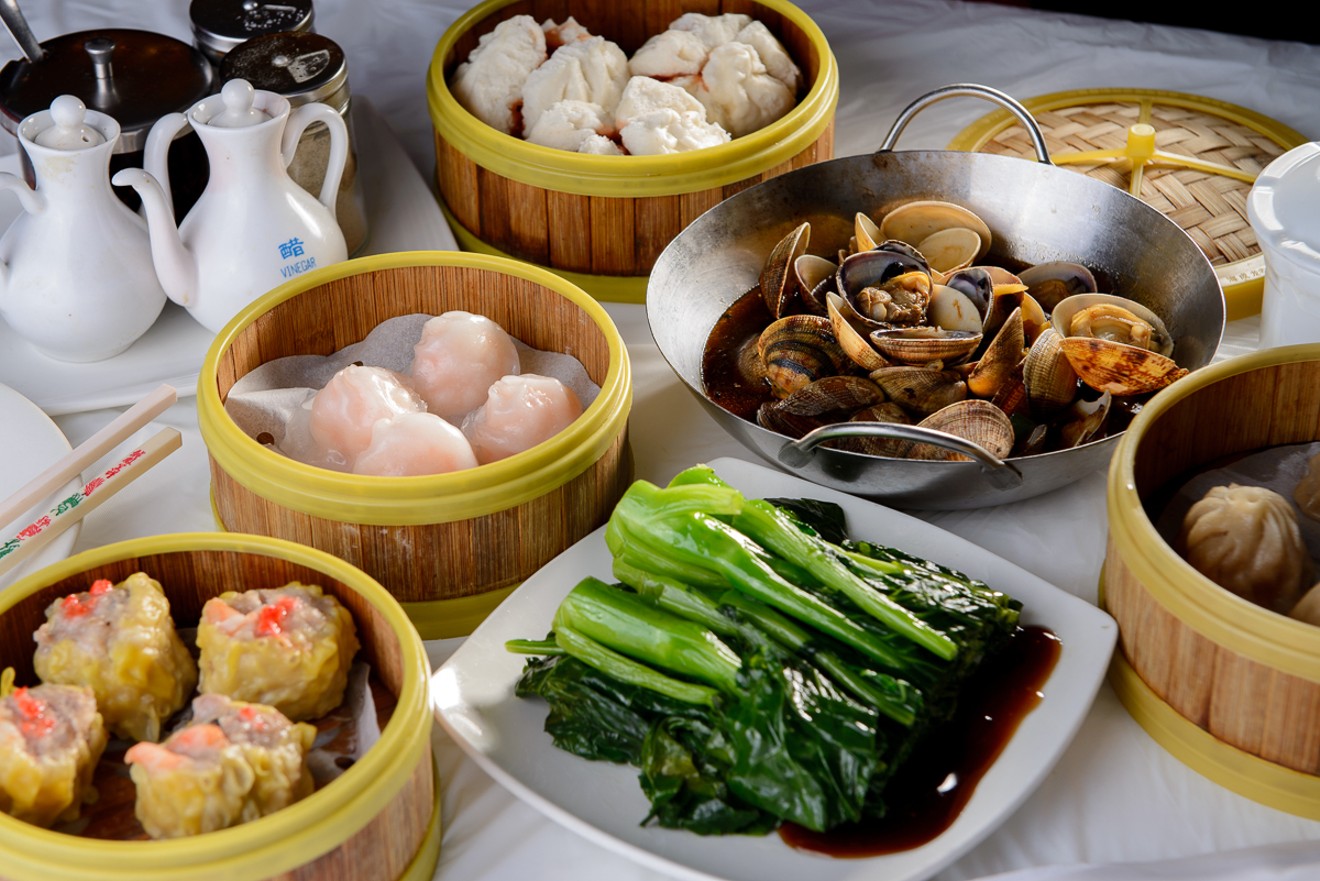 Kirin Court is known in the Dallas area for its dim sum, though we're not entirely sure why. Alison McLean
Barbecue fans grumble about the long lines they have to suffer to chow down on fatty slabs of brisket. But have they ever been to Kirin Court on a Sunday morning?

The Richardson dim sum institution, perched imposingly on the entire second floor of a strip mall, fills up so mightily on weekends that the waiting crowds spill out across the parking lot. Hosts call out party numbers on a speaker system mounted outdoors over the staircase. As the stereo blares out “number 41,” a party of five leans against the hood of a car, clutching a card that says 69.

Crowds wait all along the balcony, in the stairwell and mingling around the asphalt in groups. All the surrounding streets are lined with parked cars, as far as two or three blocks away. Even the neighborhood around Kirin Court feels its mad Sunday rush.

And the thing is: The restaurant is enormous. Its dining room seats hundreds; two different areas are equipped with lighting rigs and disco balls for special events. The kitchen is nearly as sprawling, and there’s a bonus cooking station next to the front door. There’s nothing like Kirin Court anywhere in Dallas.

I attempted to visit on three recent weekends, giving up each time. No matter the hour, the crowds remained in full force. Finally I gave up and returned on weeknights instead. No problem: At dinnertime, only five or six of the dozens of tables are occupied.

But each night, when the food arrived, I started wondering: Why exactly does anybody go to Kirin Court? 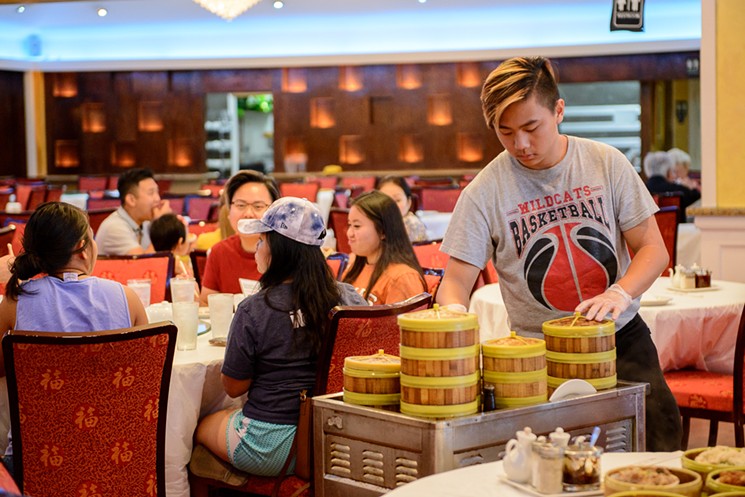 The classic dim sum experience, ordering from a cart passing by tables, isn't available on weeknights.
Alison McLean
Granted, the weeknight experience is different from a Sunday visit in several ways. Dim sum is ordered from the menu a la carte, not by pointing at a basket-laden cart as it passes by. And on weekends there’s a frying station where diners can line up and watch radish cakes and other specialties get cooked to order.

So a weekday is, maybe, not the right day to be ordering dim sum at Kirin Court. Maybe I should rephrase my question: On weeknights, why is Kirin Court open?

Our soup dumplings ($5.45 for four) had a deep, rich, meaty pork flavor, but they contained no soup. I accidentally dropped mine; it hit the plate with a thud and did not burst or leak any broth, because it did not have any. The seared radish cakes were barely seared at all, and the daikon itself seemed to have been pulverized rather than grated, so the cakes had a texture like thick vegetable Jell-O ($3.30).

Steamed char siu pork buns ($4 for three) are rustically appealing, with the unworked dough clumped around barbecue pork filling. But that filling is dessert-level sweet and light on actual meat. The pork is even sweeter and less welcome inside a nice, flaky pastry topped with sesame seeds ($4 for three). 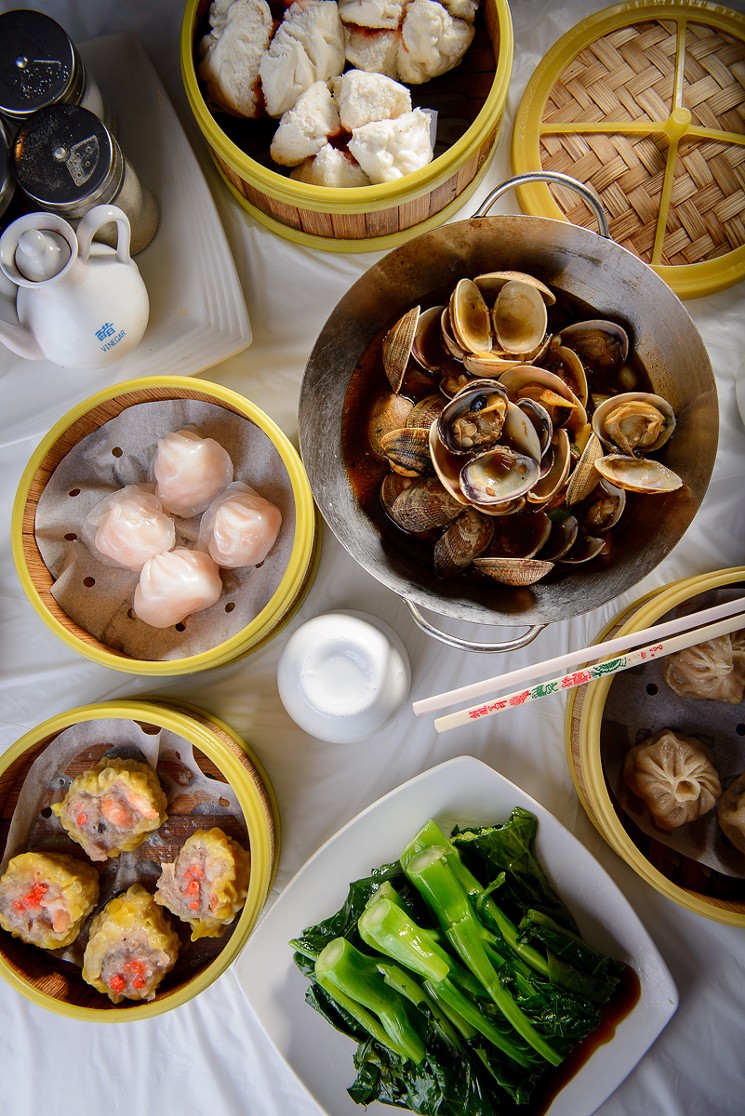 Dim sum
Alison McLean
The only dim sum dishes I really like are the shrimp and pork xiu mai, which are enormous fists of meatball wrapped in the thinnest possible sheet of dough ($4.35 for four), and the shrimp and leek dumplings, which find tenderly steamed seafood wrapped in a translucent pleated wrapper ($4.35 for three).

There’s a good dessert offering, too, of enormous round buns filled with a velvety puree of lotus seeds and caramelized sugar ($4 for three).

A trusted friend and former Observer writer who recently survived the crowds early one Saturday morning reported back a brief review to compare with my weeknight experience: “At 10:30 on Saturday, the soup dumplings suck, the radish cake is great, and the Chinese broccoli is cold.” Frying-to-order, it turns out, is critical to the radish cakes and many of the other dishes.

But it’s not just me, or weeknights. Something has clearly changed at Kirin Court.

A Morning News write-up from early 2017 practically gushes with over-the-top praise, which suggests that critic Leslie Brenner was enjoying recipes vastly different from what the restaurant serves now. Among other things, she notes a dim sum menu spanning 60 items; now the list is down to 45.

Kirin Court’s main-menu items are more acceptable. Sauteed snow pea leaves — a seasonal vegetable special available at nearly every Chinese restaurant in town — are a little more garlicky and saucy here than elsewhere, and also a little more expensive at $15. There’s also a variation that comes topped with king oyster mushrooms rather than garlic; on our visit, the kitchen was out of kings and substituted enoki ($18).

The oyster omelet is exactly what the name says: a huge, fluffy omelet filled with scallions and big oysters ($18). It’s straightforwardly delicious, albeit far eggier than the dish that goes by this name in Asia. Pepper steak, served on a sizzling hot plate, has an agreeably over-the-top amount of black pepper ($17). Coughing rarely feels so good. 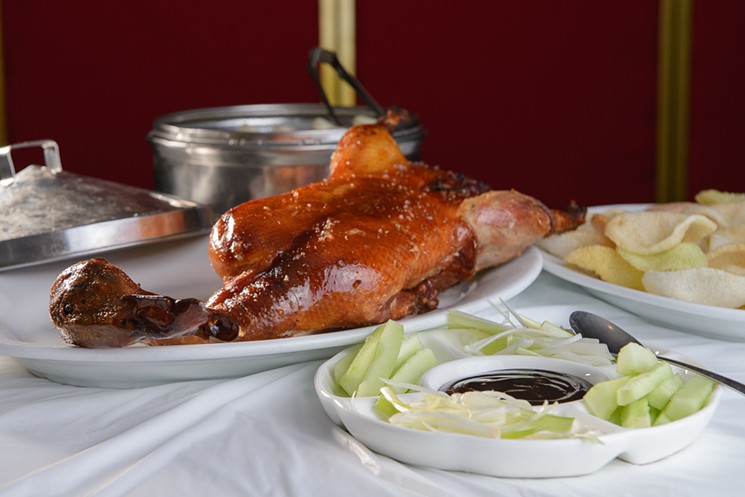 Beijing duck
Alison McLean
Our waiter suggested rounding out our order with a dish of flat noodles and sliced beef ($12). It tasted like exactly those two things, a bit of soy sauce and not much more.

There are a number of possible explanations for Kirin Court’s continued hold on the Dallas imagination. Maybe it’s that we just don’t have a strong dim sum game in town. Maybe it’s the enormous space, which is well-equipped for big social gatherings. Or maybe it’s the proximity to central Dallas, which appeals to visitors who can’t be bothered to drive a few miles north for better food.

Whatever the explanation, this Richardson institution isn’t living up to its outsize reputation. Superior dumplings — at places such as Imperial Cuisine or Jeng Chi — aren’t too far away. Even First Emperor, right across the street, has its merits.

No doubt some angry reader will send me a message that says something like, “It’s your own fault for going to Kirin Court on days when everyone knows that it’s bad! You should have gone on the days when it’s good!”

Kirin Court, 221 W. Polk St., Suite #200, Richardson. 214-575-8888. Open 11 a.m.-9 p.m. Monday-Friday; 10 a.m.-9 p.m. Saturday-Sunday.
KEEP THE DALLAS OBSERVER FREE... Since we started the Dallas Observer, it has been defined as the free, independent voice of Dallas, and we'd like to keep it that way. With local media under siege, it's more important than ever for us to rally support behind funding our local journalism. You can help by participating in our "I Support" program, allowing us to keep offering readers access to our incisive coverage of local news, food and culture with no paywalls.
Make a one-time donation today for as little as $1.