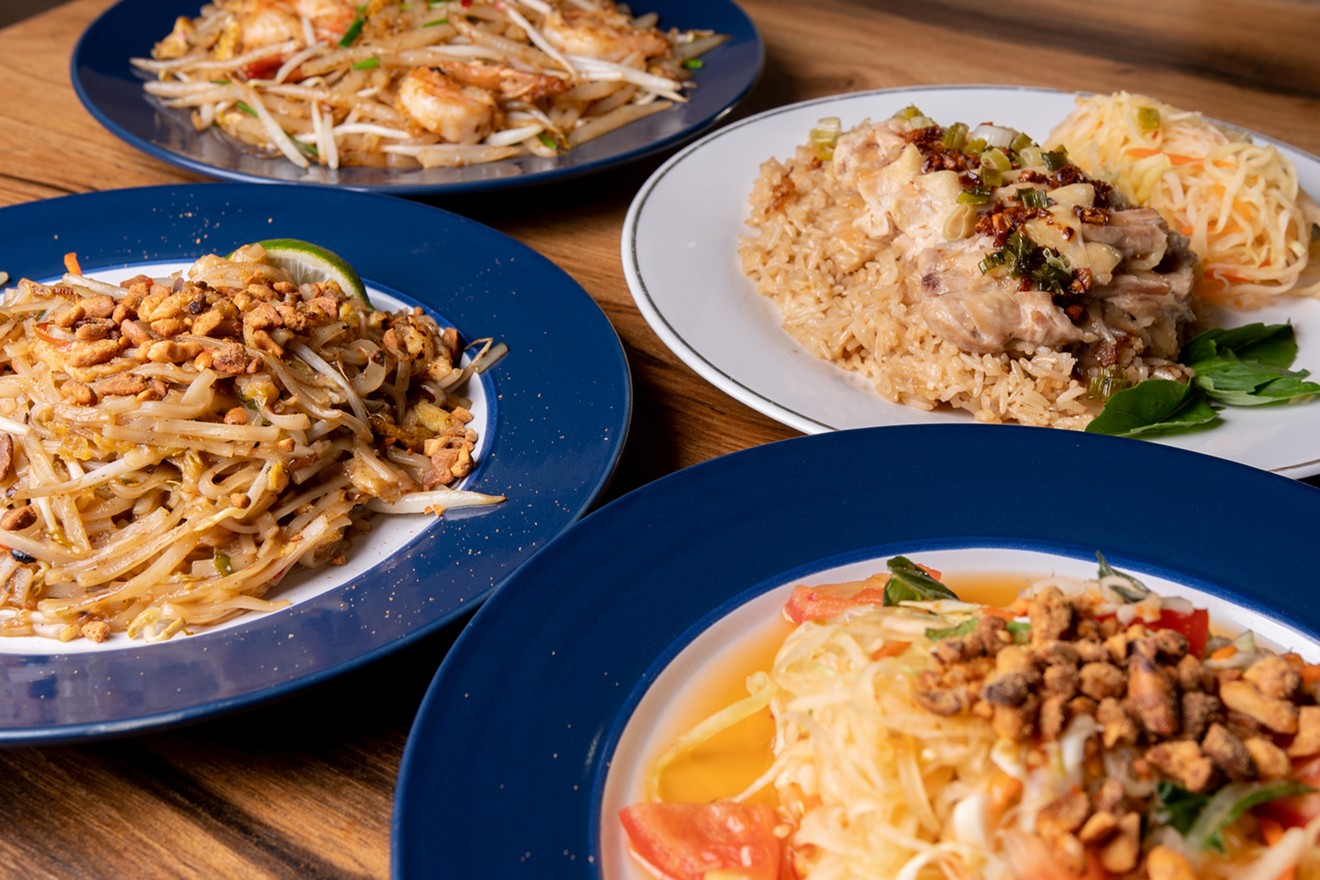 Cambodian dishes, like these served at Apsara, are gaining traction in the North Texas dining scene. Alison McLean
“No one knows what Cambodian food is,” the Cambodian-American chef Joseph Be says. “But if Thai food, Vietnamese food and Lao food can be popular, why can’t Cambodia’s food?”

Good question. There is not a lot of Cambodian food in the Dallas area, especially compared with the cuisines of its three neighbors. Online, local foodies can debate the merits of dozens of Thai and Vietnamese shops. North Texas is the largest Lao food destination in the United States, with choices ranging from cheffy Khao Noodle Shop to mini-chains Sabaidee and Zaap Kitchen.

Cambodia, meanwhile, is just making its mark locally. A spot named Kamp Fire opened and then closed in an ill-suited location downtown. Rumdoul debuted in Rowlett in 2019, and, on the opposite side of Dallas, Joseph Be opened Apsara in Grand Prairie’s Asia Times Square food court at the end of 2020.

Both Rumdoul and Apsara draw heavily on the foods of the country’s neighbors, in part to bring non-Asian customers in the door, and in part because culinary borders and geographic ones don’t always line up. I haven’t gotten to try Rumdoul yet, but Apsara is a treasure, presenting huge flavors and hearty portions from its tiny food court stall.

Apsara’s menu divides neatly — at least on paper — between Cambodian and Thai food. In practice, the sections blur delightfully.

“We have our own variations of the pad Thai, the pad see ew, even the Hainanese chicken, we have variations on that,” Be says. “We use Cambodian ingredients to make it different. If you can eat Lao food and Thai food, it won’t be trouble at all to try Cambodian food.”

The papaya salad at Apsara
Alison McLean
For example, papaya salad is a refreshing, light palate-cleanser, with slivers of carrot and a little vinegary tang. On the other hand, Thai noodle dishes are prepared with freshly chopped peppers, not dry spice mixes or pastes, and they can be thrillingly fiery.

But it’s best to start on the Cambodian menu. Slow poaching in flavorful broth yields up the ultra-tender chicken served on bai mon ($12). Know any food snobs who complain that chicken is too boring, too dry or too hard to make flavorful? Bring them to Apsara and serve them bai mon. Here, the juicy meat is plated across the top of a portion of rice — also cooked in the same broth — with fish sauce, fried scallions and a relish of garlic that’s been cooked low and slow until it turns sweet. There’s papaya salad on the side, too.

The shrimp lort cha at Apsara: all proteins work wonderfully in this dish.
Alison McLean
My favorite dish on the menu is lort cha, a kind of rice noodle that is shaped into little stubby pins. They’re slightly shorter and thicker than matchsticks, often tapered at one end and delightfully chewy ($10). Stir-fried in a wok, some of the noodles acquire black sear marks and a smoky flavor. They’re tossed with long slices of chives, bean sprouts, eggs and diner’s choice of protein (everything is good in lort cha).

Don’t miss the twa ko sausages and get them as a combo plate rather than a side dish, so they come with sides of rice and sweetly pickled papaya salad ($10). The sausages, seasoned with garlic and galangal and brightened by makrut lime leaves, are dark brown and maybe most remarkable for their texture. The links are dried, with firmer outside edges and centers that have a soft crumble. They’re impossible to resist.

Curry fried rice is, well, exactly what the name says: a solid plate of fried rice, served in a bounteous portion, with plenty of curry powder to enliven each bite ($10).

Apsara’s Thai dishes are good, too. Employees ask for a spice number at the ordering counter, on a scale of one to five; because of the use of fresh chiles, the numbers are not softened for non-Thai audiences. Three is, already, spicy enough to call for a taller glass of water and a light side dish. Order with confidence.

Three may well be the right number for Apsara’s pad Thai ($10), which starts out with a gently sweet sauce before the diced chile peppers are added. The noodles are loaded up with bean sprouts, egg, scallions and carrots, with scoops of peanut and wedges of lime on the side. Pay $3 extra for shrimp and there will be a bounty; my order had nearly a dozen.

Go spicy, too, on the pad kee mao ($10), the wide, flat “drunken noodles” that get tossed with meat, assertive Thai basil, onions and large-cut chunks of Chinese broccoli, stalks included. There are more assertive versions around town, better suited to a night of drinking and spicy-dish-eating, like those at Ly Food Market (my favorite) or CrushCraft. But there’s nothing wrong with this one. 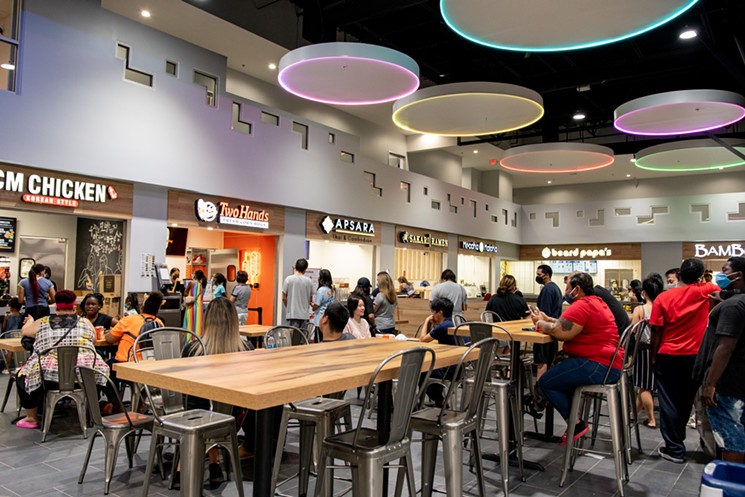 The food court at Asia Times Square is a foodie destination. Here Apsara is flanked by ramen, Korean corn dogs, Korean fried chicken and Beard Papa's Japan-based confectionary.
Alison McLean
Be, who owns the ramen and matcha stalls next to Apsara as well, got his start in the restaurant business at age 12. He comes from a Cambodian family who escaped the Khmer Rouge’s genocide, arrived in America and started opening Chinese restaurants. After school, the young Be joined them in the kitchens. At Apsara, he focuses on the recipes his mother made at home.

It’s hard not to notice the parallel with another young restaurateur: Donny Sirisavath, whose Laotian-American family also owned a Chinese restaurant, and whose restaurant, Khao Noodle Shop, is also a tribute to his mother’s cooking.

This new generation of chefs, driven by both family pride and national pride, is ready to introduce their cuisine to the biggest possible audience. Laotian food has gone from one of Dallas’ best-kept secrets to one of its best-known features in just a few years. Why can’t Cambodian food do the same?

Apsara Thai and Cambodian, 2625 W. Pioneer Pkwy. #212, Grand Prairie. 972-975-5093. Open daily 11 a.m.-9 p.m.
KEEP THE DALLAS OBSERVER FREE... Since we started the Dallas Observer, it has been defined as the free, independent voice of Dallas, and we'd like to keep it that way. With local media under siege, it's more important than ever for us to rally support behind funding our local journalism. You can help by participating in our "I Support" program, allowing us to keep offering readers access to our incisive coverage of local news, food and culture with no paywalls.
Make a one-time donation today for as little as $1.