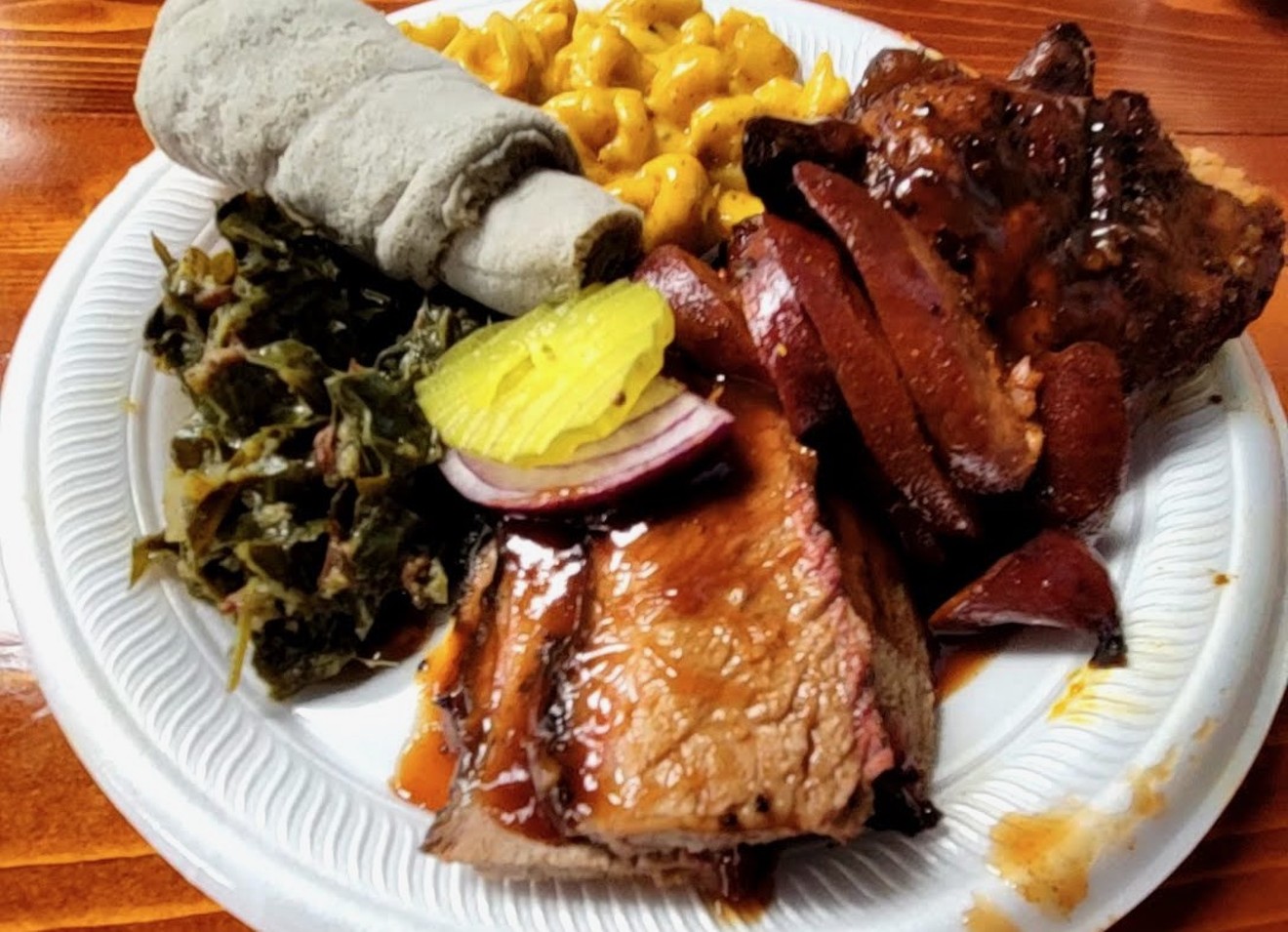 A three meat plate with awaze sausage, chicken and brisket. Eric Mayne
There have always been unusual food combinations that have had people shaking heads in discontent, but shortly after had those same people humming with joy like it was love at first bite. French fries in a Wendy’s Frosty, bacon laced cupcakes and of course the debate that has ruined marriages and friendships alike: pineapple on pizza.

Smoke'N Ash has a few items on sale, both Texan and Ethiopian.
Eric Mayne

What about injera and brisket? This type of food fusion frenzy has also penetrated the Texas barbecue scene, changing the way we think and appreciate one of the Lone Star State's oldest and revered traditions. Thirty years ago it would be inconceivable to think about a restaurant slinging unconventional slabs of barbecue in a Texas smokehouse with flavors and spices from other parts of the globe.

Nowadays it's hard to imagine living in a world without the option of Asian and Mexican barbecue joints that spawned phenomenal dishes like brisket elote and brisket with papaya salad. Today there is a new flavor of barbecue.

Smoke'N Ash BBQ and Cherkose Ethiopian Cuisine is located in a sleepy part of south Arlington not too far from the border of Mansfield. It's in an unpretentious strip mall where it seems most of the cars parked out front are carrying people clamoring to get a taste of that barbecue.

Smoke'N Ash is the creation of Waco-native husband Patrick Hicks and his wife, Fasika Hicks, who was born and raised in Addis Ababa, Ethiopia. Over a few years of trying different recipes, they created what is potentially the world’s first Ethiopian barbecue restaurant.

The inside is decorated with Texas regalia integrated with Ethiopian flags along with home goods that hail from the East African nation. Although it’s not your typical large barbecue joint with oversized picnic tables, there’s plenty of seating inside. The place is a family affair with husband and wife tag-teaming in the kitchen with other family running the front. With all the greetings and smiles, it’s like walking into a warm environment at your favorite auntie’s house with a symphony of heavenly smells coming from the kitchen.

At first glance the menu looks like your standard smokehouse offerings of brisket and ribs and a few sides, but there is more to this story. Smoke'N Ash also serves some classic Ethiopian dishes like doro wot ($14.99), which is chicken slow cooked in a curry-like spicy sauce made with berbere, butter and cardamom, accompanied with a boiled egg.

A platter of doro wot served with traditional Southern and Ethiopian sides.
Smoke'N Ash
Another Ethiopian tradition on display is the tibs ($15), pan-fried beef with various seasonings and spices. It’s one the most popular dishes in Ethiopian restaurants, and like some Texas briskets, it sells out quickly. We got a three-meat plate ($17.99) with awaze sausage, chicken and brisket. All were splashed with a fiery homemade barbecue berbere sauce.

Anyone who has ventured out for an evening of Ethiopian food knows that it is very spicy. Unlike Thai restaurants, Ethiopian servers seldom ask for a heat level because they generally only have one speed.
One of the stars of the show here is the berbere mac and cheese. Mac and cheese is an old soul food recipe and you may think you’ve had every iteration of this rustic Southern dish, but here it stands out.

The greens cooked with tibs was also a pleasantly surprising addition.

Another thing that makes Smoke'N Ash unique is the Ethiopian coffee. They even have an Ethiopian coffee ceremony for $20 that includes coffee and smoked berbere popcorn tableside.

Smoke'N Ash BBQ, 7301 Matlock Road (Arlington), 11 a.m. - 8 p.m. Tuesday - Saturday; Closed Sunday and Monday
KEEP THE DALLAS OBSERVER FREE... Since we started the Dallas Observer, it has been defined as the free, independent voice of Dallas, and we'd like to keep it that way. With local media under siege, it's more important than ever for us to rally support behind funding our local journalism. You can help by participating in our "I Support" program, allowing us to keep offering readers access to our incisive coverage of local news, food and culture with no paywalls.
Make a one-time donation today for as little as $1.