We Tried All Seven of Dave's Hot Chicken Spice Levels. Yes, Even the Reaper Chicken.

Danny Gallagher takes a bite of the reaper, the hottest level at Dave's Hot Chicken. Jerry Nerviano
The drive-thru chicken wars have another serious con-tender (pardon the pun, laughter distracts me from the pain).

The chicken chain's menu looks pretty simple but the variety comes from its preparation. Every piece of boneless chicken is brined for hours, long before it ever sees a fryer. The spice is cooked into the skin and breast instead of just slathered on a piece of bland chicken.

Dave's lets you order your preferred level of spiciness by giving you more than just two choices of hot or not, something we seem to have forgotten was available to us while Popeye's and Chick-fil-A feuded for our affection. Chicken is available in tender and slider form and each piece is seasoned in one of seven levels of spiciness from "no spice" to "reaper," referring to the infamous, record-breaking Carolina Reaper pepper.

Addison's newest chicken joint gave us an early taste of its seven different heat levels, which turned out to be a good thing since the opening day lines reached Disneyland queue lengths. 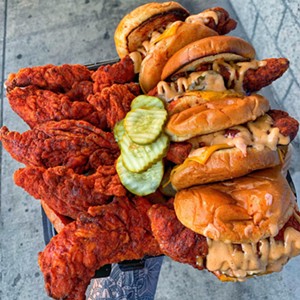 Courtesy of Dave's Hot Chicken
1. No Spice
No review of a chicken joint is complete without a control test. If the chicken doesn't taste right on its own, no amount of herbs and spices can save it. Fortunately, that's not the case with Dave's. The skin is crispy and the meat is juicy. Even the blandest palette could tell that much time and care have been used to make it.

2. Lite Mild
Dave's lowest level of available heat doesn't start with "mild." It's an OCD pet peeve I've had with restaurants that do this because mild is technically the middle of the road, and food is capable of achieving a heat level between mild and meh.

The lite mild level offers an interesting, extra layer of savory on top of the salty brine that's been soaked into the chicken. The spiciness hasn't even really started at this point. The spice is there but it's not screaming for your attention like a spoiled child.

3. Mild
The spiciness has started but is still comfortable and manageable even for people who think Tabasco is the highest level of heat humankind has created. Owner David Futrell says that every spice level of chicken is made with varying levels of Carolina Reaper pepper to enhance the flavor. It's hard to make an impressive mild anything, but the deep attention to spice even on the lower levels makes it something special.

4. Medium
It turns out that tasting three tenders that have yet to tackle my taste buds with any excessive force was just a diversion. The medium chicken makes a huge jump from mild.

The heat is not excessively painful, but you can feel it start on the back of your throat. If you're smart you'll scrape the spices off of your tongue with a hit of one of their thick ice cream milkshakes, a must if you go to the higher end of the spectrum. The spices start to gather on my fingers for some satisfying finger-licking once the chicken is gone.

5. Hot
The reason I came here is starting to become much clearer. The spicy wave that started in the back of the throat from the medium chicken is now working its way toward the front of my mouth like a horde of Mongols approaching the Great Wall of China.

There's nuance here that most spicy food places don't get or know how to prepare. "Hot" doesn't have to be hot to the point where the bottom half of your skull goes numb. Just like Dave's "hot level," hot chicken can have a kick without being so overpowering and painful that you can't savor any other part of it or see shapes and colors.

6. Extra Hot
The spiciness is now occupying every piece of real estate in my mouth. The chicken's juiciness has diminished just a tad because of the spice level, but it's an enjoyable burn. The brine complements the spice, so it's still tasty even if I'm needing more milkshake to cleanse the canvas before we get to the main event.

7. Reaper
Here's the hottest level of chicken that Dave's has to offer. It may be the death dish that friends will dare each other to eat, but it's a curious little bastard. It's sneaky. It's a spice ninja that creeps up on you and strikes just when you think you've conquered it.

The reaper chicken doesn't have that overpowering, vinegary smell of carnage that most death wings do because they are made to be a gimmick rather than a nourishing, satisfying morsel. In fact, I ate an entire piece thinking that I had beaten it, but the subtlety of the spice mix comes back at you in waves slowly building in the passing minutes. It starts at the back and works its way up to the front of your mouth while draining your sinuses and turning your eyes into waterfalls along the way. Then the spice Mongols break through the wall and start to create the familiar, satisfying pain that rolls across your lips.

Even if you've got the kind of iron tongue that you believe can endure such a thing, you'll always end up paying the price in the end. Pun intended this time.

Dave's Hot Chicken, 14750 Preston Road, 10 a.m. to 11 p.m., Monday through Sunday.
KEEP THE DALLAS OBSERVER FREE... Since we started the Dallas Observer, it has been defined as the free, independent voice of Dallas, and we'd like to keep it that way. With local media under siege, it's more important than ever for us to rally support behind funding our local journalism. You can help by participating in our "I Support" program, allowing us to keep offering readers access to our incisive coverage of local news, food and culture with no paywalls.
Make a one-time donation today for as little as $1.