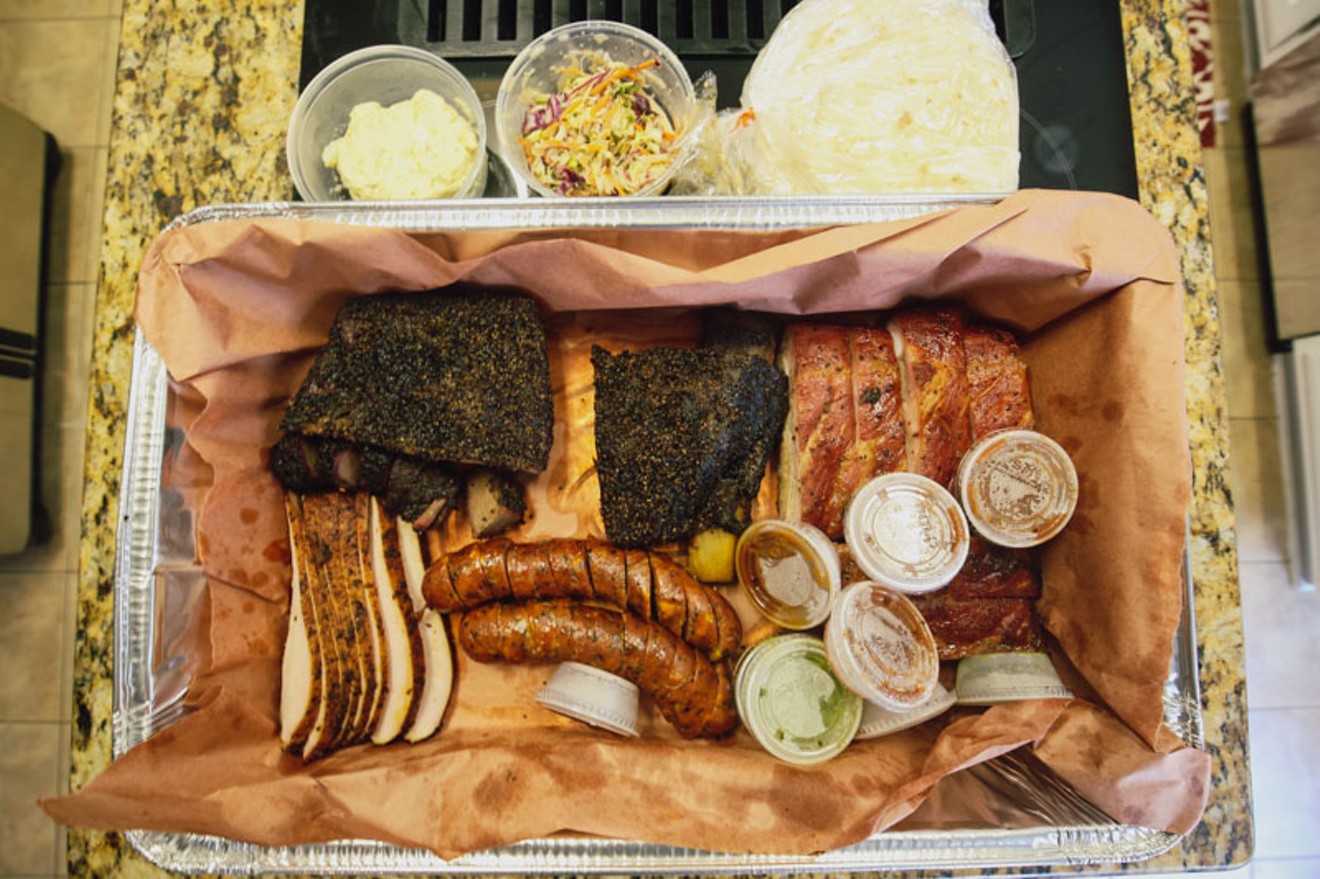 You might ask, "Hey, why doesn't my tray of barbecue come with tortillas and chimichurri sauce?" It would if you ordered it from Zavala's Barbecue. Chris Wolfgang
This is Texas, which means we all have an image in our head of what a tray of great barbecue looks like. There's definitely some brisket in our tray, pencil-width slices fanned perfectly with a peppery black bark and a deep pink smoke ring. We've got some sausage, too, and we can imagine the snap of the casing when we bite into each piece of spiced and ground beef and pork. And because this is Texas, we've got some ribs, and they're textbook as well: large, meaty chunks glistening a dark mahogany.

Even though none of the meats need it, there's some barbecue sauce in little cups, but not that molasses-sweet, gloopy stuff that comes from the supermarket. This sauce has been shown some Texas love, and it's a little thin, more tomato and vinegar, with the perfect hit of spicy heat. Next to the sauce are some extra cups of chimichurri sauce, and you can tell it's homemade and ready to make a perfectly cool, earthy complement to the rich beef flavors. You can't wait to grab one of the homemade tortillas, pile it with meats and sauce, and get — wait, did we say tortillas?

You're not dreaming. You're eating Zavala's Barbecue.

Before you angrily hold down the caps lock key and lambaste us in the Facebook comments about how this isn't real Texas barbecue, let us explain. Owner and pit master Joe Zavala is serving up barbecue that has the Texas chops but is sprinkled with just a bit of Zavala's Hispanic heritage, just like he remembers from his childhood.

Zavala's only serves beef from 44 Farms, like this prime brisket that was melt-in-your-mouth tender.
Chris Wolfgang
One taste of Zavala's barbecue and you'll find that smile. Zavala's got their start by catering barbecue but recently found a Saturday-only home in front of the Brass Bean in Grand Prairie, where they serve up lunchtime barbecue until sold out. If you're worried about missing out, you can place a pre-order by Friday morning, then pick up before the lunch service begins on Saturday. It also gives you the opportunity to order entirely too much food, but that's what makes barbecue leftovers so amazing.

Let's cut right to the beef: Zavala's serves prime brisket ($12 per half-pound) sourced from 44 Farms, and it's easily on par with any of DFW's big names in barbecue. The peppery bark has just the right zing of heat, and there was the textbook amount of rendered fat under the bark on our lean brisket to make every mouthful a melt-in-your-mouth delight. We also ordered a beef rib ($11 per half-pound), also from 44 Farms. Zavala's portions are a bit smaller than some 24-ounce monsters we've seen, and it's the ideal way to enjoy what may be the best item on the menu without spending an arm and a leg. Zavala's also tossed a few burnt ends into our order, and you'd be remiss not to add some of the smoky beef nuggets to your own.

We took the time to slice Zavala's beef rib. If you tear into it like a T-rex, though, we totally understand.
Chris Wolfgang
We rounded out our order with a couple of links of Zavala's pizza pepper sausage ($4.50 each), a half rack of pork ribs ($8.50 per half-pound) and a half-pound of smoked turkey breast ($9). There's not a weak protein in the bunch, and the turkey may be the star of the non-beef show, overflowing with moist smoky flavor.

As for the tortillas and chimichurri? Simply put, both are amazing and a delightful twist to traditional Texas barbecue. When asked where Zavala sources his tortillas, he would only say that it's a "small hole in the wall with limited production, so we have to keep it on the down low." Fair enough — they're just another reason for us to come back.

Speaking of coming back, Zavala's just announced plans to open their own brick-and-mortar location in Grand Prairie, just down the street from where they serve today. If the construction goes to plan, expect the new home of Zavala's to be open early next year and still serving on Saturdays, but with more smoked meat capacity thanks to a new smoker that should come online at the same time. The challenge with churning out more food will obviously be to maintain the same top-notch barbecue on a larger scale. We aren't concerned. As long as the tortillas are still included, you can count on us coming back to Zavala's time and again.

Zavala's Barbecue, 123 Main St., Grand Prairie
KEEP THE DALLAS OBSERVER FREE... Since we started the Dallas Observer, it has been defined as the free, independent voice of Dallas, and we'd like to keep it that way. With local media under siege, it's more important than ever for us to rally support behind funding our local journalism. You can help by participating in our "I Support" program, allowing us to keep offering readers access to our incisive coverage of local news, food and culture with no paywalls.
Make a one-time donation today for as little as $1.