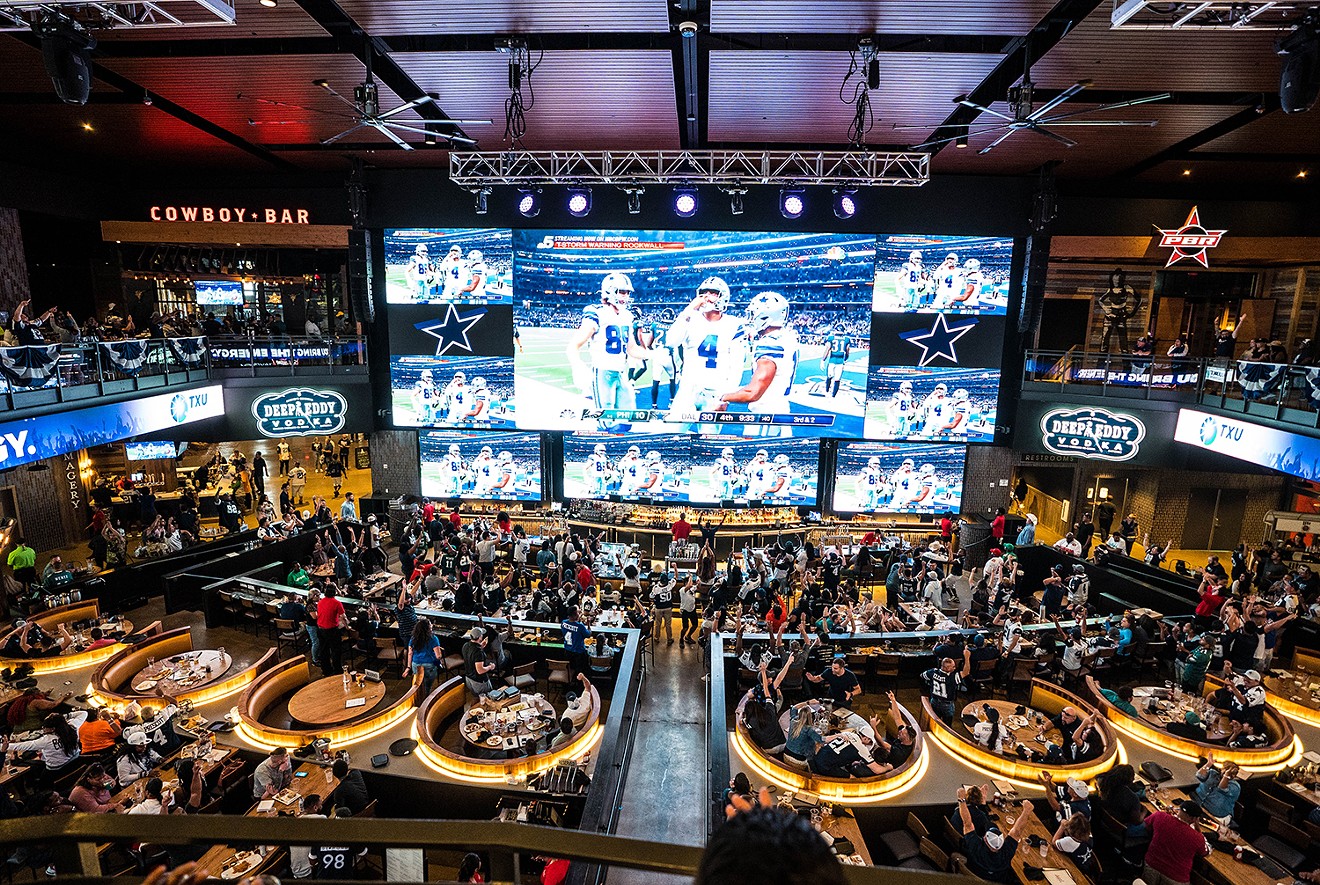 Texas Live! is about as close as it gets when you can't go to the game. Brad Holmes
It’s the most wonderful time of the year – the NFL season. What’s not to love? Wings and beer with a side of adrenaline as everyone cheers on America’s team. Historically speaking, that might come with a side of disappointment — whether it be from the Cowboys or due to a three-hour-long waitlist at a wing bar. Unless you camp out hours in advance on game day at a restaurant or bar, chances are you’ll end up watching the game from outside as the waitlist moves at a snail's pace.

Don’t fret. Ahead of the Cowboys’ season opener this weekend, we’ve prepared a list of both newcomers and tried-and-true spots where you can cheer on the Boys. This is our year, right? Let's cheer to that. (Honestly, what else can we do here? We're open to ideas.)

1650 E. Randol Mill Road (Arlington)
Texas Live! gives fans all the bells and whistles without the stadium fuss. For $10 admission, you can watch the game on a 100-foot LED HD screen in “the only atmosphere better than the stadium!” Admission won’t guarantee you a table at this 200,000-square-foot destination spot, but fans can book a table. They start at a $250 minimum for a four-top, but that shouldn't be a problem. 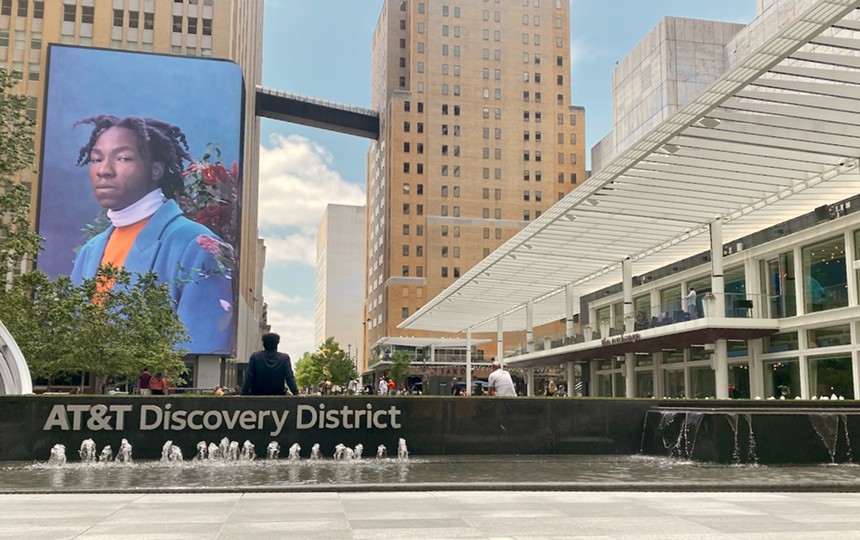 The media wall extends on the other side of the building. Passengers in airplanes landing at Love Field can probably watch the game too.
Lauren Drewes Daniels

308 S. Akard St. (Downtown)
Continuing with the big-screen theme, AT&T Discovery District's 8,700-square-foot media wall will be showing the games. For those who like options, this is ideal. The Exchange food hall offers two stories with 16 food spots and two bars. Pro tip: a Dock Local lobster grilled cheese pairs perfectly with a touchdown. To keep cool, visit Jaxon Beer Garden and grab a chamoy mango margarita. Bring a lawn chair or blankets to sit down.

2908 Greenville Ave. (Lower Greenville)
Greenville Avenue's Stan's Blue Note celebrates 70 years in business this year by welcoming "Dem Boyz" back with door prizes, $4 Fireballs, $3.75 domestic drafts and $14 domestic pitchers. As one of Dallas' oldest bars, Stan's has become a hub for fanatics. For the best seats, come early and stay for the fresh, homemade meatball subs. 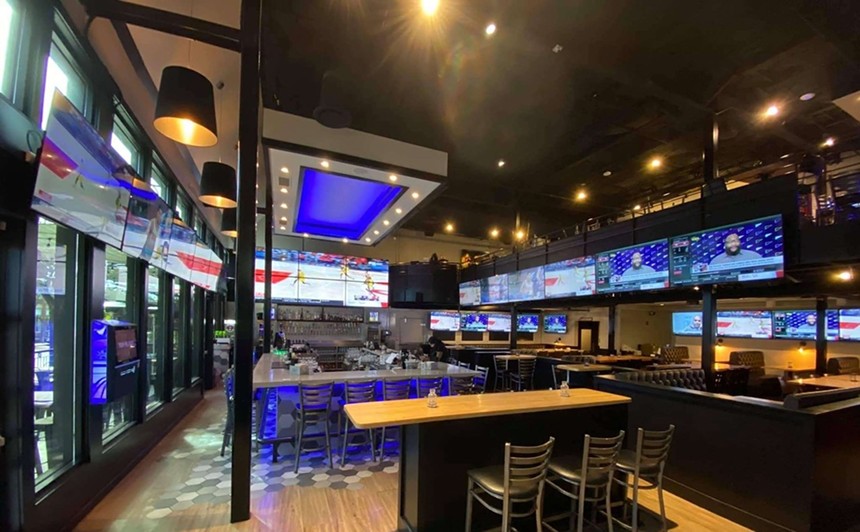 You can see multiple TVs from every seat in the house at Christie's.
Courtesy of Christie's

2817 Greenville Ave. (Lower Greenville)
Christie's Sports Bar's second iteration checks all the boxes. The two-story joint has a first floor with TVs in every corner. The rooftop is a fan favorite and even has corn hole. The new location came with a much larger kitchen, allowing Christie's to expand its menu. Game-day staples like fried pickles, mozzarella sticks and wings are still on the menu, but you can also order a charcuterie board appropriately titled "The Board" or New York steak frites. Avoid the wait by making a reservation. Just text the day, time and number in your party to (469) 724-1888.

3090 Olive St. (Victory Park)
In Victory Park, Hero is a 24,000-square-foot mega spot with six full-service bars and a 24-foot screen along with all the amenities to meet your game-day needs. Along with the basics, NFL fans can opt for ahi tuna tostadas and tuna poke, or build their own bowls. Cocktails are named after Dallas sports teams such as the Cowboys Mule and Frozen Mavericks Marg. The espresso martini, Dallas' crowning cocktail, is also available.

534 S. Riverfront Blvd. (Cedars/Deep Ellum)
For a patio experience, Viva El Gallo is the spot. The Latinx-owned restaurant has become a hub for uplifting Mexican culture through Banda Fridays and Tejano music-centered events. The restaurant's love of sports is equally celebrated. For the Cowboys season, Viva El Gallo is expanding hours to accommodate games and will bring in a large projector to show the action. Satisfy game-day hunger with shrimp cocktails, ceviche, camarones a la Mexicana and hot skillets filled with beef, chicken, shrimp, sausage, onions and peppers.

2810 E. Trinity Mills Road (Carrollton)
For a quaint option, Carrollton's Quinlan's Sports Grill and Bar has been a community favorite for over a decade. The Mills Pointe shopping center sports bar has garnered quite the reputation, and locals flock to the bar for strong pours. The neighborhood bar might not be loaded with screens, but it's the kind of spot that feels like home. Come in a newcomer and leave a regular. The menu is stacked with good old-fashioned comfort foods. Try the homemade meatloaf with mashed potatoes and black-eyed peas. 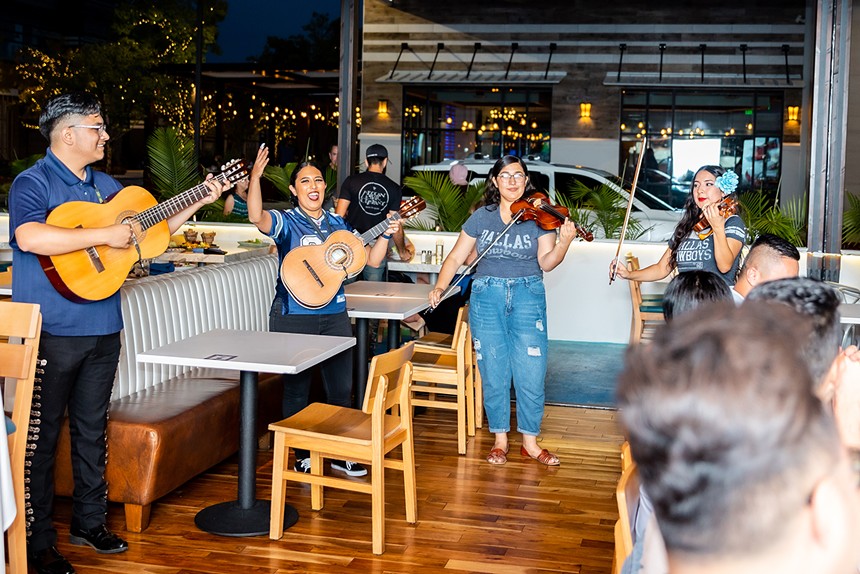 6121 W. Park Blvd. (Plano)
For Mexican cuisine, don't overlook the beloved Mexican Bar Company in Plano's Willowbend Mall. It's known for the Bodega Brunch and has become a go-to destination for daily happy hours, entertainment and Latin-influenced takes on American favorites like the lobster huevos agohadas. On Mondays, marvel at a mariachi band decked out in Cowboys gear.  Along with Cowboys games, Mex Bar also shows the Steelers, Bears, Chiefs and Raiders. Reservations and a private dining room are available.
KEEP THE DALLAS OBSERVER FREE... Since we started the Dallas Observer, it has been defined as the free, independent voice of Dallas, and we'd like to keep it that way. With local media under siege, it's more important than ever for us to rally support behind funding our local journalism. You can help by participating in our "I Support" program, allowing us to keep offering readers access to our incisive coverage of local news, food and culture with no paywalls.
Make a one-time donation today for as little as $1.