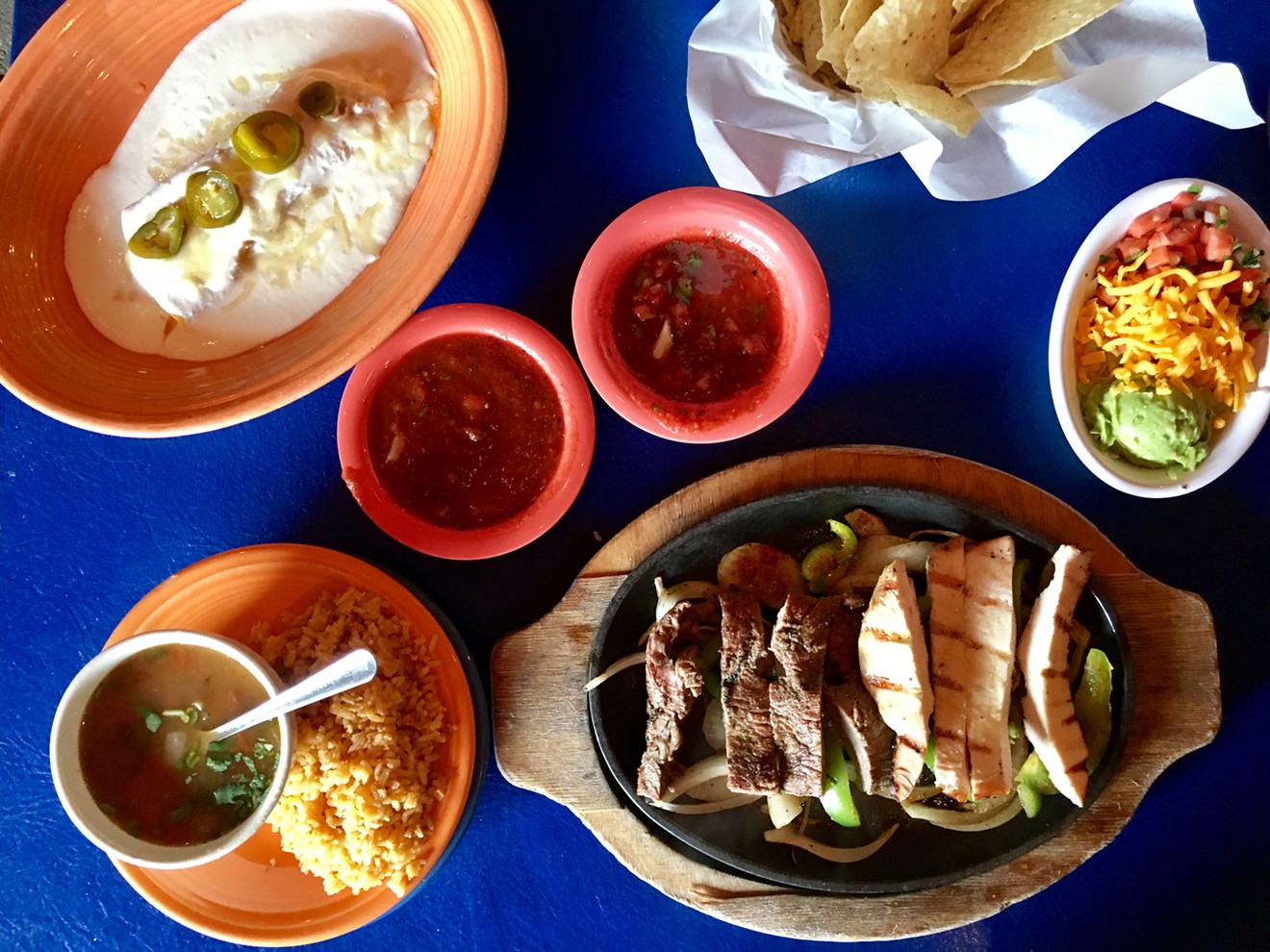 A combo platter of fajitas, grilled chicken and steak ($16.99) has the vital sides of pico de gallo, rice, charro beans and shredded cheese. Nick Rallo
All-American is a series that looks at beloved, longstanding North Texas eateries and examines their histories while exploring how the food has changed — for the good or bad — over the years.

Every Texan has a fajitas routine. Do you paint tortillas with neon-green guacamole and shredded cheddar the color of Miller High Life before topping everything with charred onions still screaming from the cast-iron and adding a crown of steak? Do you add sour cream before or after everything’s in the tortilla? Flour or corn? Chicken or steak? Do you even use silverware when you have fajitas? Everyone has a personal fajita drill, and they’re running every hour at Blue Goose Cantina.

This place is an unbreakable machine; it's the Terminator of Tex-Mex. No review, no foodie in the state will stop its remarkable exoskeleton: It's built with the glue of molten queso, yellow as the dawn, along with smoking fajitas and the sticky trap of sour cream enchiladas. It's expanding and growing locations. You know the weakness you exhibit at Blue Goose: Chips and salsa lead you into a trance, causing you to empty your supply before you realize what's happened.

Queso is an elixir that causes forgetfulness and bad decision-making. On my last visit, I ate a bowl by myself, then ordered margaritas. Where else in the world is it totally cool to eat a bowl of liquid cheese, using tortilla chips as utensils, and follow it with frozen tequila?

At Blue Goose Cantina, the time in between between the ordering of fajitas and the arrival of sizzling, plated fajitas is seconds. No food arrives faster in Dallas than at our Tex-Mex mainstays. Test it next time you’re at Blue Goose: Start saying the alphabet in your head and mark which letter you’re at when the food arrives. I was at “U.”

Despite the speed, you’ll get the important and necessary side dishes: Pico de gallo, punctuated with fresh cilantro if it doesn’t suck, shredded cheddar, guacamole and/or sour cream. At Blue Goose, the humidity in the air is from the dusty flour tortillas running through the bite-sized factory in the dining room. How can you not feel the magic of charm from this place? Sauna-level tortilla steam and Def Leppard’s “Pour Some Sugar on Me” playing on the speakers? Count us the hell in. The food arrives, and it’s all Tex-Mex paint-by-number, still as fun as it was in the '90s.

In an a la carte sour cream enchilada, the sour cream sauce simmers with plenty of cheese and white pepper.
Nick Rallo
This fall, Blue Goose Cantina's original location on Greenville Avenue turns 33. There are seven locations — it's surfing for more — and it’s always been a family-run joint. Nick Peterson, son of Robert “Bob” Peterson, leans towards the Aw Shucks business, another chain the family owns, but cut his teeth at Blue Goose. His first job was bussing tables at the Tex-Mex chain at age 15. He got behind the bar as he got older.

Bob Peterson walked into the kitchen and redid everything, according to his son, starting from scratch. Once, not long after opening, Bob took the entire Goose management team to a competitor to taste its food.

“It was one of those chains,” Nick says. The legend goes: Bob tore apart the food with his hands, right in the middle of the dining room, illustrating how little actual meat you’d find in each dish. His team paid and left without a single bite of the competing chain’s food.

Fajitas, strips of steak and chicken grill-marked over a mesquite wood fire quickly became hits after Blue Goose’s fast reboot. It cooks chicken on the bone on the grill and roast tomatoes for the daylight-bright, cilantro-loaded salsa. The first thing that happens at Blue Goose every morning is the lighting of the mesquite grill.

“I learned this from my dad: We don’t cut corners,” Nick Peterson says. “You get those chains and they start getting into the powdered refried bean mix, and they’re just looking for the cheapest cuts of meat that they can find, and they just season the heck out of it to cover it up. We don’t do that.”

The first Blue Goose Cantina on Greenville Avenue was established in November 1984.
Nick Rallo
Here’s how I do fajitas: I hold a tortilla and spoon on various blistered vegetables, salsa, sour cream, tender steak and a little sour cream. At Blue Goose, some of the best things are less obvious: The charro beans, stewed with cilantro and diced bacon, are better than most of the things on the menu, and they come with any combo. Peterson says the beans are soaked for two days to get the right texture.

“It’s not the most labor-friendly way to do it, but it’s the right way," he says.

With the music playing, the queso flowing like golden wine and margaritas sliding down the hatch, it’s easy to be charmed into a stupor by Blue Goose. Like Aw Shucks, food is simple and reliable. It may not change your life, but it’s consistent. The Greenville location of the Goose is nearly 33, but it’s not the best-performing location, Peterson tells me.

"There’s a huge bit of nostalgia that goes with it," he says. "It’d have to be pretty dire to close that store. That’s for sure.”

Cold, numbing margaritas and chips and queso, the yellow lava served in the edible tortilla bowl that you’re already picturing, are nearly a Dallas rite of passage. If you poll the contacts on your phone, you’re likely to find a high percentage of Goose fans. Like the queso, it’s hardened into a crust inside our Dallas DNA. It’s difficult to think of Greenville living without the Blue Goose patio and the humid tortilla machine. Your fajita routine is safe.