The Fifth is a Richardson Culinary Hide-Out 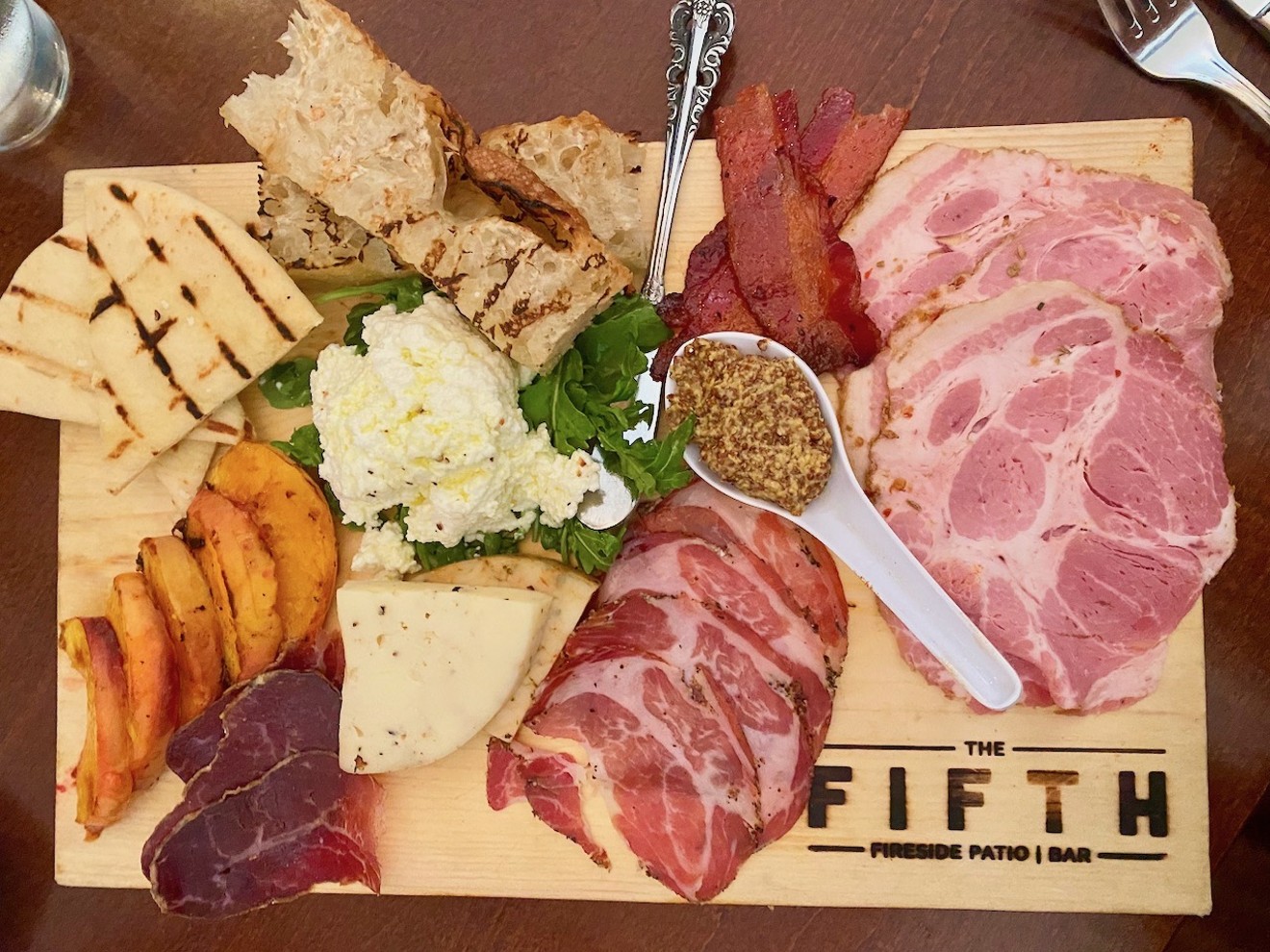 Charcuterie and cheese board at The Fifth Lauren Drewes Daniels
It can be frustrating to spend your days sifting through local food news for a living, only to learn about a spot that's been right under your nose but you'd missed for years. In a large metropolitan area, it's bound to happen.

Case in point: The Fifth, an end cap at the II Creeks Plaza retail center in the Canyon Creek neighborhood of Richardson. It's well-nestled. If you don't have business in the area or live nearby, you'd likely never know of this shopping center hiding under the canopy of large, old trees. 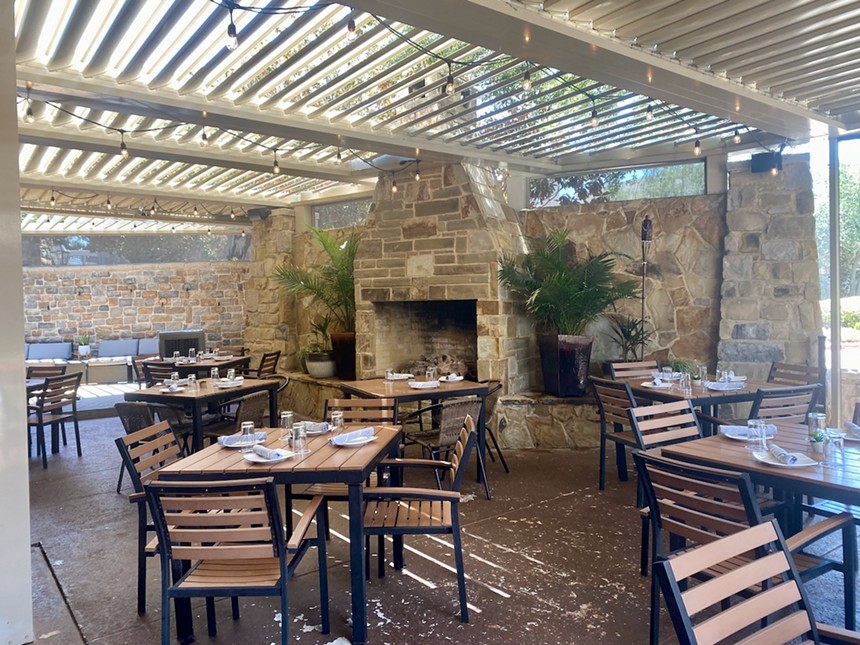 The large, climate-controlled stone patio at The Fifth.
Lauren Drewes Daniels
The Fifth opened on Valentine’s Day in 2019 and is owned by the same group that owns Shady’s Burgers and Brewhaha, which has one location at the other end of this retail center. The concept for The Fifth is an upscale neighborhood restaurant with a from-scratch kitchen and a big bar with strong cocktails.

The dining room is of modest size with some deep spacious booths, which makes for a not-too-busy experience. It's anchored by a large bar and an even larger, climate-controlled stone patio with a fireplace. When the weather is in the Goldilocks belt — give or take 20 degrees either way — it's surely a nice place to dine.

While the space is appealing, the details in the menu are what really shine here. Start with a charcuterie and cheese board filled with house-cured meats and cheese, some local. Expect to see seasonal items, like the grilled peaches when we visited a little earlier this summer. This board all alone would make for a substantial meal. 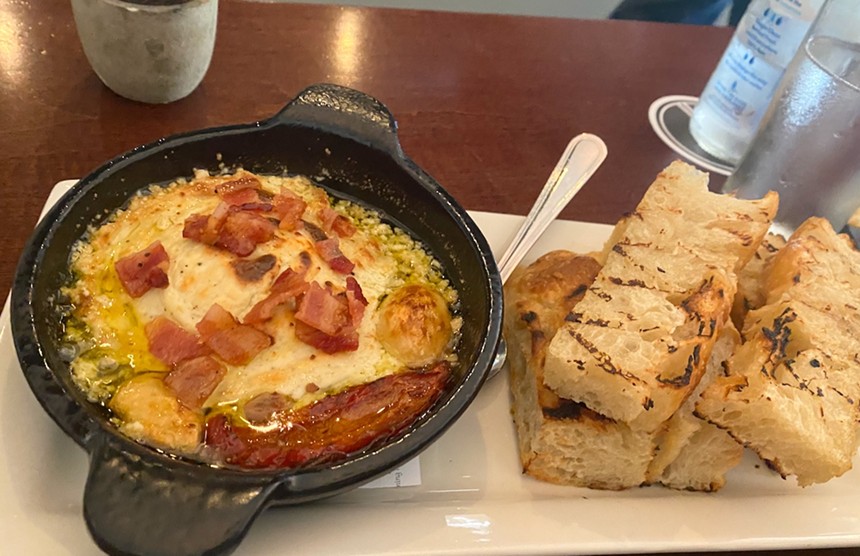 Blue cheese fondue
Lauren Drewes Daniels
Be sure to get the blue cheese fondue. The idea may make you pause, but it turns out that melted and sizzling blue cheese is killer. The Fifth uses a blue cheese mousse, which is made with blue cheese crumbles mixed with heavy cream and cream cheese, toss it with a garlic puree then top it with Worcestershire. Then come well-roasted tomatoes and garlic cloves along with thick chunks of bacon. It's served sizzling with a side of grilled focaccia from Richardson-based La Casita Bakeshop. 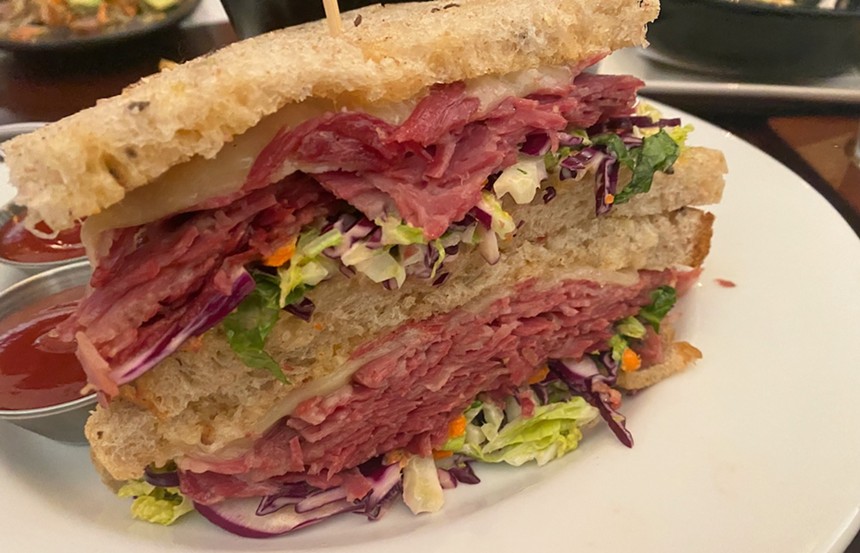 Corned beef melt
Lauren Drewes Daniels
The corned beef melt ($16) is worth a trip alone, even if you never find yourself in north Richardson. The Angus corn-beef brisket is brined in-house for five days in a mix of Prague powder, juniper berries, allspice berries, mustard seeds and bay leaf, all of which soaks in chicken stock and Shiner Bock.

Before serving, thin slices of shaved corned beef are seared on the grill and topped with Swiss cheese. The final construction includes a house-made coleslaw with a house dressing called Louie. La Casita's toasted seeded sourdough holds it all together. It’s a mountain of wonder and is one of the better sandwiches we've had in quite some time. And we pride ourselves on the number of sandwiches we eat. 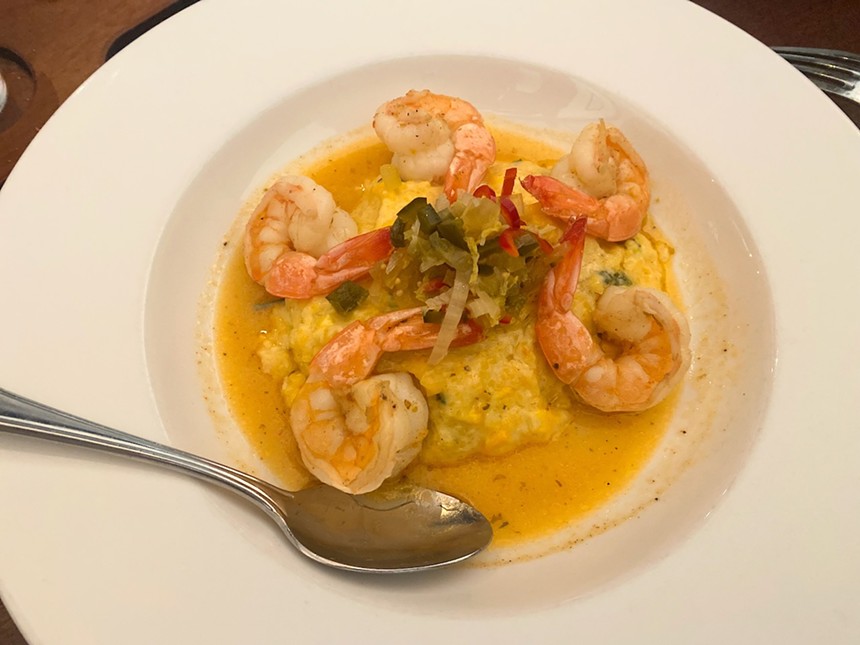 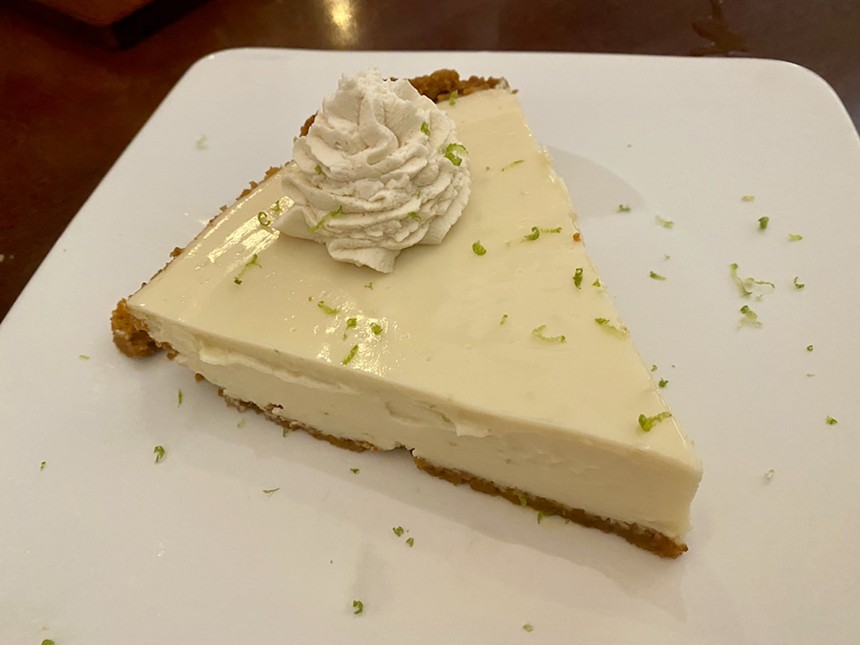 Key lime pie at The Fifth
Lauren Drewes Daniels
And if you're a Key lime pie person, you'll certainly want to end with a slice here. The Fifth uses a dulce de leche sweet and condensed milk for a smoother taste and texture.

We would have eaten more, but couldn't. Future endeavors will include the chicken-fried chicken with a bacon gravy and, perhaps, the High Society Burger with wagyu beef, brie, caramelized onions and a pepper aioli on a brioche bun.

Service here was doting. Everyone is well versed in the menu and could explain dishes in detail. We didn't get a chance to spend time at the bar, but grabbing a drink there with a blue cheese fondue could be an amazing happy hour.

The Fifth also has a Saturday and Sunday brunch.  If the dinner menu is any indication, brunch is certainly worth checking out, especially on the patio when the weather is nice.

The Fifth, 2701 Custer Parkway, Richardson, 4 – 9 p.m. Monday; 11 a.m. – 9 p.m. Tuesday – Thursday; 11 a.m. – 10 p.m. Friday; 10 a.m. – 10 p.m. Saturday; 10 a.m. – 9 p.m. Sunday
KEEP THE DALLAS OBSERVER FREE... Since we started the Dallas Observer, it has been defined as the free, independent voice of Dallas, and we'd like to keep it that way. With local media under siege, it's more important than ever for us to rally support behind funding our local journalism. You can help by participating in our "I Support" program, allowing us to keep offering readers access to our incisive coverage of local news, food and culture with no paywalls.
Make a one-time donation today for as little as $1.