The bar and cocktail shaking at Swizzle Lauren Drewes Daniels
A Tiki lounge called Swizzle recently opened on Lowest Greenville, a refreshing splash of tropical bliss in a city with an at-times desert ambiance. On a recent Friday night the spot was modestly busy, which is a good sign during a pandemic. An eager host carefully appointed seats in the small, socially distanced space.

The entrance to Swizzle is an open-air patio lounge, anchored by a glowing water feature in the corner which sets the mood for this island-like escape. There are also a few tables on the patio to dine at when it's not too chilly out.

The staff is decked out in all their floral bests. There are even two quasi-private seating areas for guests looking to keep their libations and convo on the down-low. As people leave, the hosts yells “Mahalo,” the Hawaiian word for thank you, which totally throws everyone off, pausing before pushing the door open, trying to think of the correct response. Tiki tip: "You’re welcome" is “‘A‘ole pilikia” [ah-oh-leh pee-lee-kee-yah]. Spit that out then see who’s thrown. 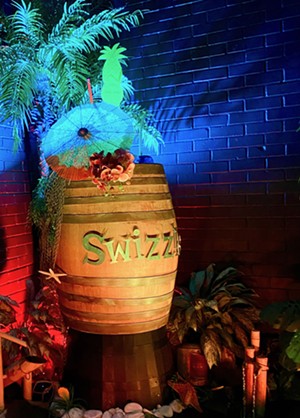 Jen Reyes, co-owner along with husband Marty, is of Filipino descent and, as previously reported, has strong family ties to Hawaii and paid careful attention to every detail of the spot. The menu is no exception.

In the cookbook Kau Kau Cuisine and Culture in the Hawaiian Islands, author Arnold Hiura describes the food of Hawaii as “being a reflection of its multiethnic population, a smorgasbord of exotic delicacies brought to the table by various ethnic groups as each came to call the Islands home."

At Swizzle the menu is centered on the traditional three-part Hawaiian meal: two scoops of rice, a scoop of macaroni salad and a protein, which always includes Spam as an option.

According to a 1999 article in the Honolulu Star-Bulletin, macaroni salad is the “holy trinity, the show horse in a trifecta. No self-respecting plate lunch is without it.” The piece goes on to explain the mayonnaise-ladened elbow pasta became a staple because it's affordable and filling.

The standard two scoops of white rice date back to the 1880s when plantation laborers from Japan, China and Korea sought hearty lunches to sustain their long days outside. They filled lunch pails with leftover rice and meat.

And then there’s the Spam, Hiura writes that this was brought to the islands during World War II when fresh meat was hard to come by. “Spam Classic was both available and affordable. What’s more, many households in Hawai’i were without refrigerators at the time, and canned meat, which requires no refrigeration, quickly became a staple throughout the islands.” The kalua pork at Swizzle
Lauren Drewes Daniels
The menu at Swizzle stays true to these classics. A popular traditional dish is loco moco ($13), which is a hamburger patty topped with gravy, an egg and a side of macaroni salad and rice. Swizzle’s is packed in a brown to-go box making mixing the elements together easy, which seems the natural way to consume. They also have a loco moco tofu.

The panko-crusted katsu chicken ($12) is a good option for those who always order some variation of chicken strips on any menu anywhere they go. The Kalua Pork resembles slow-cooker pork, and again, works great with the two sides (picture above).

An olive branch to those who aren't so fond of brash carb-loading, the Asian chopped salad ($12) is a great option that travels very well.

Loco balls ($9) are a mix of Spam and beef with mushroom gravy for anyone who wants to dabble in the art of canned meat but isn’t quite willing to fully commit. Honestly, you hardly get that mushy Spam texture at all in these. 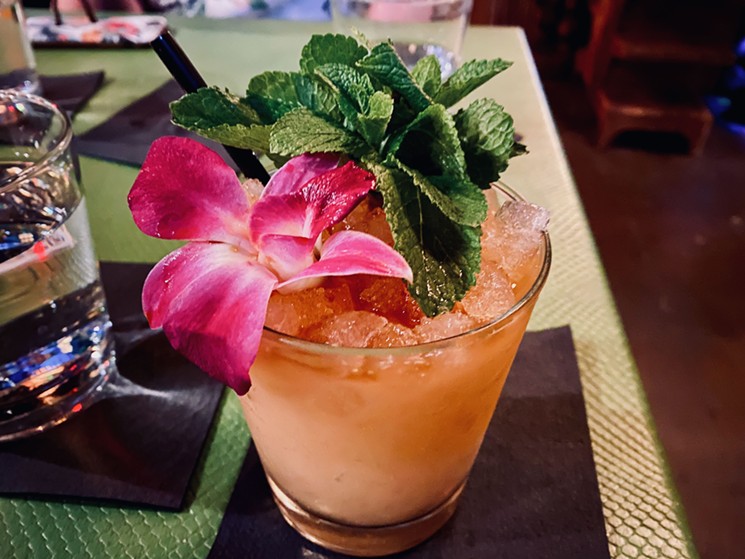 The Bitter Truth Mai Tai is perfect while waiting on the patio for a to-go order
Lauren Drewes Daniels
The cocktails alone are a big draw, obviously, being a Tiki lounge. I desperately need glasses and couldn’t read the drink menu on my phone, so I ordered the first thing I could read; a Bitter Truth of Mai Tai (why bitter truth stood out … I can’t say or see). Anyway, Swizzle has developed an ABV-equivalent for their drinks, designated with little spears next to each item, which I can only see now that I’m on a laptop.

All the food was packed nicely and traveled well. On a sunny warm day when the pandemic is in the rearview mirror (sideview maybe), it will definitely be a fun place to absorb Hawaiian vibe and cuisine. And lots of spears.

Swizzle, 1802 Greenville Ave., No 110 (Lowest Greenville). Open 4 p.m. to midnight Wednesday through Sunday. Reservations are required after 6 p.m.
KEEP THE DALLAS OBSERVER FREE... Since we started the Dallas Observer, it has been defined as the free, independent voice of Dallas, and we'd like to keep it that way. With local media under siege, it's more important than ever for us to rally support behind funding our local journalism. You can help by participating in our "I Support" program, allowing us to keep offering readers access to our incisive coverage of local news, food and culture with no paywalls.
Make a one-time donation today for as little as $1.