Goldee’s Barbecue: Is it Worthy of a No. 1 Ranking by Texas Monthly? Hell, Yeah. Good as gold. Angie Quebedeaux
You’ve probably heard the news that Texas Monthly recently released their latest list of the Top 50 Barbecue restaurants in Texas. And like it or not, Texas barbecue, in general, is evolving. Pitmasters are starting to reinvigorate traditional smoked meats by blending some of their cultural roots into the tried-and-true techniques.

Goldee’s Barbecue in Fort Worth has done just that by serving some of the best-smoked meats around while adding some unique menu options you won’t find elsewhere.

They moved to Austin several years ago to figure out their future as young 20-somethings. Most have been in the industry since 2013 and have worked for several of Texas Monthly's other top 50 barbecue restaurants including Franklin's Barbecue, Valentina’s, La Barbecue, Micklethwait, Terry Black’s, Truth BBQ and 2M. Over the years, they perfected their craft, saved their money and finally opened their own spot in February 2020, a month before COVID shut everything down. They pivoted quickly and operated as a takeout-only spot before reopening for indoor dining in April.

Their lives changed overnight with the release of the Texas Monthly top 50 list, and some might now consider them barbecue royalty.

People are arriving as early as 5 a.m. to get in line for the 11 a.m. opening. We decided to make the trek out there on a recent Sunday morning to see if the hype is worth it. And the short answer is a resounding, hell, yeah. The line starts around 6 a.m. on most days.
Angie Quebedeaux
Goldee’s is located about five miles south of Interstate 20 just west of Arlington on a two-lane road, and if you didn’t have your GPS guiding you, the only clue is a large simple white sign with the word "BAR-B-Q" painted in black. We arrived around 9:45 a.m. and there were about 30 people in line at that time. We came prepared with our lawn chairs and luckily, they offer free beer and water and have restrooms available if needed.

The first customer in line said he arrived around 6:15 a.m. People were filled with anticipation, conversing with each other about their love of barbecue and taking selfies in front of the Goldee’s sign. One guy even brought a drone to capture the experience and the crowd from 30 feet up in the air.

One of the owners came out frequently to greet people, thank everyone for coming and remind them about the free beer and water and where the restrooms are. Once they opened, it took us exactly 35 minutes to make it to the front of the line, so the total time from arrival to eating was just under two hours. They only allow one group in the building at a time but hand out samples of brisket to those still outside. If you look closely, you'll see one diner brought his own bottle of tequila. Because why not?
Angie Quebedeaux
Goldee’s makes everything from scratch, and when it was time for us to order, we opted for a platter of all of the available meats, with the exception of the beef rib. We were also excited about their Laotian sausage, which is house-made and served with sticky rice and jeow som, a Laotian spicy and sour dipping sauce. Unfortunately, it's only available on Saturdays. We'll be back for that.

Brisket is served half lean and half fatty. Both were tender, and if you’re lucky enough to get some burnt ends thrown in, you will have hit the brisket trifecta. The lightly sauced pork ribs were perfectly cooked and easily came off the bone without falling apart. The smoked turkey was moist and surprisingly flavorful. This was a standout for us, and our only regret is we only ordered a quarter pound of it. Pork hash is at about six o'clock on the tray, next to cheese grits and beans above those. The turkey in the middle of the tray was one of the biggest surprises of the day. (Our food editor would leg wrestle in the middle of the restaurant for that thick slice of burnt ends.)
Angie Quebedeaux
We’ve eaten a lot of beans from other barbecue places and most are mediocre at best, but the beans at Goldee’s are loaded with chunks of brisket and a tangy sauce that is a bit spicy. These are probably some of the best beans we’ve had.

The pork hash may not look very appetizing, but it's delicious. It’s not a common side option and tastes more like a stew served over rice than a hash. Just do yourself a favor and order it if it’s available.

And we would typically tell you the bread is not worth the valuable stomach space, especially when the real star of the show is supposed to be the meat. However, Goldee’s bakes their bread fresh every day and it’s fluffy and delicious. 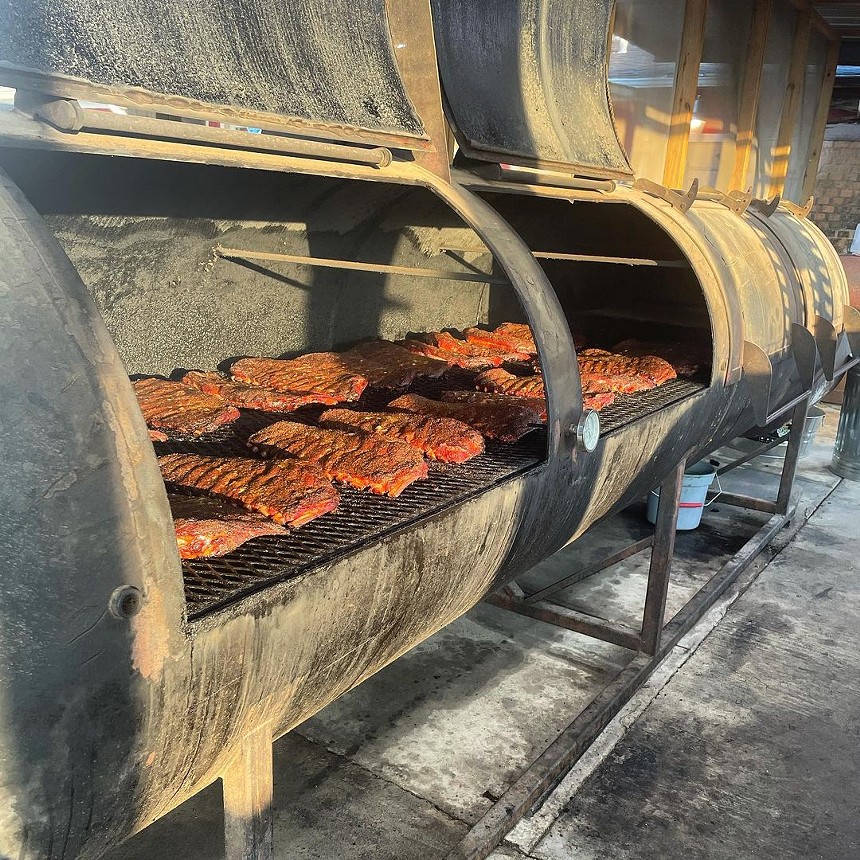 They're ordering another smoker to increase capacity.
Courtesy of Goldee's Barbecue
We too love Goldee's, especially for the fact that a band of barbecue brothers united with smokers and a vision to open a spot off a narrow road in a sleepy town are doing their own thing. This is the new American field of dreams. Just make great barbecue and they will come.

4645 Dick Price Road, Fort Worth. 817-480-4131. Friday - Sunday 11 a.m. to sold out.
KEEP THE DALLAS OBSERVER FREE... Since we started the Dallas Observer, it has been defined as the free, independent voice of Dallas, and we'd like to keep it that way. With local media under siege, it's more important than ever for us to rally support behind funding our local journalism. You can help by participating in our "I Support" program, allowing us to keep offering readers access to our incisive coverage of local news, food and culture with no paywalls.
Make a one-time donation today for as little as $1.