With This New ‘Poke Doughnut,’ Poke Has Officially Jumped the Shark in Dallas 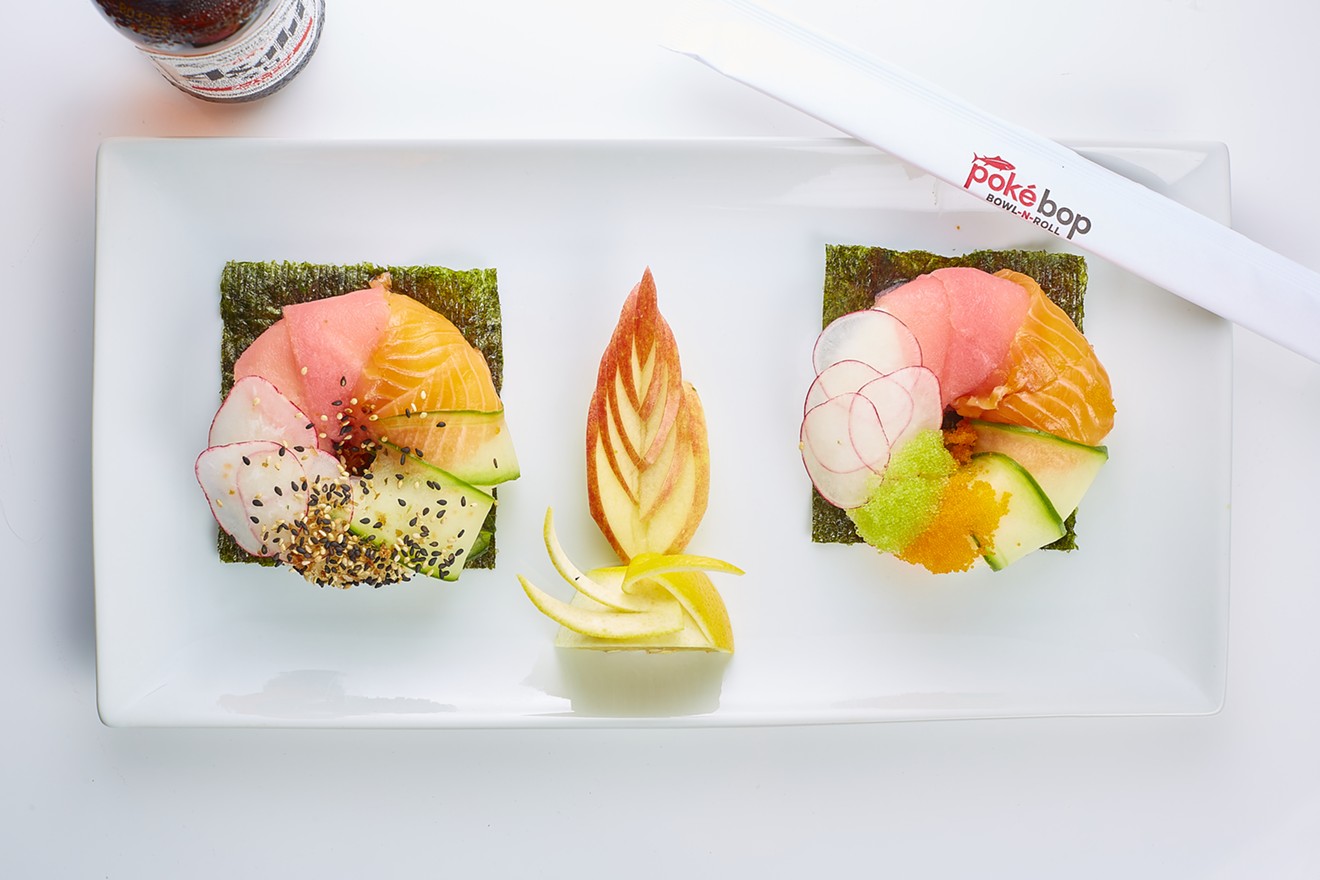 Poke Bop, now open on Lemmon Avenue, serves a sushi doughnut, and we’re not sure how we feel about that. Kevin Marple
If you’re into poke, the Hawaiian marinated raw fish and vegetable dish that is more properly eaten under a beach cabana than in a suburban Texas strip mall, then you’ve been having a pretty good few months. In DFW, the number of new fast-casual poke places is staggering: FreshFin on Greenville Avenue, Pok the Raw Bar in West Village, the Poke Point in Carrollton, Ahi Poke Bowl in Arlington, Hoki Poki in Richardson, Below 40 in Plano and now Poke Bop, open on Lemmon Avenue. That list doesn't even factor in the new restaurants — like Fast Furious Japanese Grill on Greenville and Kabuki Japanese Restaurant in the Galleria — that serve a varied menu alongside poke dishes, along with forthcoming eateries like Go Fish Poke in Preston Center.

That’s a lot of marinated tuna sprinkled with sesame seeds. It’s not terribly surprising that poke is having a moment here (albeit a moment that happened about two years later than the rest of the country). Poke combines all the best things about sushi and salad and tosses them together in one fresh, healthy bowl. Poke also lends itself well to the fast-casual build-your-own-bowl concept, which is popular among clean-eaters and office workers alike.

But in the world of kooky hybrid foods and viral foodstagram videos, poke itself is apparently not enough. Now, there are poke doughnuts. And they are ... something.


At Poke Bop, now open at 4103 Lemmon Ave., you can try a poke doughnut for yourself. What exactly is it? “The Poké Donut is sure to be an instant cult favorite, which is a made-to-order sushi roll bent in the shape of a circle, creating a beautiful edible Poké donut!” according to a press release from Poke Bop.

Look, I know I’ve spoken fondly about sushi burritos in the past, mostly because I love sushi and any vehicle that can enable me to eat it while mobile. But I have to draw the line somewhere, and for me, that line is sushi doughnuts.

Poke is awesome. Doughnuts are awesome. Fun, playful hybrid foods can be awesome. But there is no reason on planet earth, outside of Instagram and videos from blogs called “Foodbeast,” that a poke doughnut should exist. As you can see from the photos and video, since the base of the poke doughnut is made of rice, it must be eaten atop a piece of seaweed just to keep it from falling to pieces. In lieu of the ingredients mixing together beautifully in a bowl, they’re relegated to various sections on the doughnut, meaning that some bites yield a mouthful of fish while others result in a mouthful of sesame seeds.

It looks cool, but that’s about it. Which is why it’s probably not surprising that Poke Bop’s store “designed their interior with Instagram in mind,” according to the press release. “A surfboard (long board) is displayed prominently in the back in keeping with the Hawaiian beach culture, along with the words Live, Wild, Love, Laugh, and Smile adorn[ing] the restaurant’s white walls. Don’t forget the hashtag #Ilovepokebop.”

Sweet mother of God. Not only are we creating dishes just for Instagram, now we’re launching entire restaurant franchises designed entirely just for Instagram photos. And this is, indeed, a franchise: “Poke Bop’s owners plan to open four more Dallas-area stores in 2017, and franchise opportunities are available for interested parties,” according to the press release.

Viral internet food trends are here to stay. But if there’s one thing that doesn’t have staying power, it’s a business model built on temporary food trends that rely on people willing to eat awkward, inconvenient dishes just to look cool on Instagram.