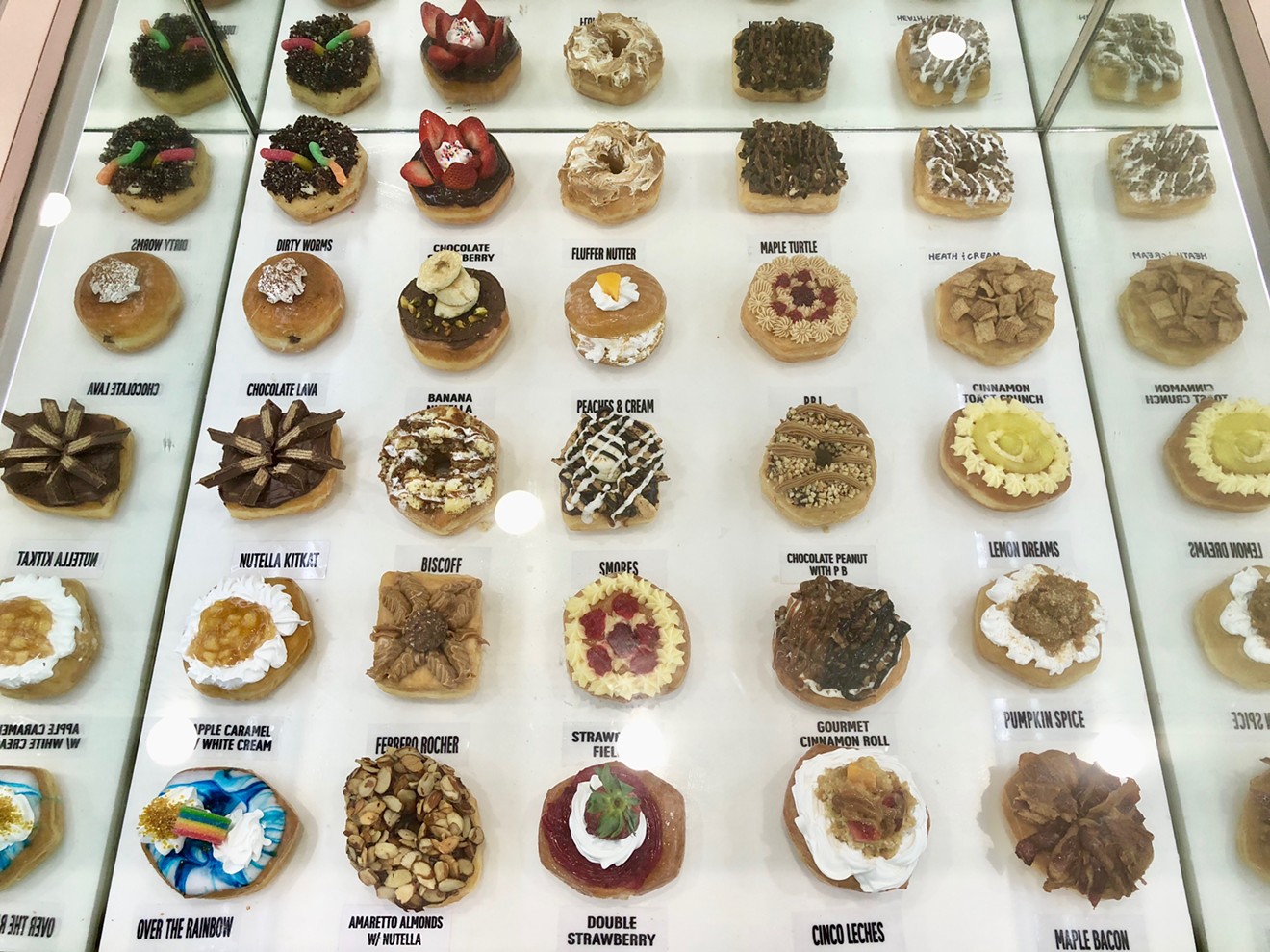 Wow Donuts serves more than 120 varieties. Paige Weaver
Wow Donuts and Drips in Plano was two years in the making. Opened in December near the Shops at Willow Bend, this is not your typical doughnut place. General manager David Sim put a lot of research into the concept.

“Coffee shops are where people hang out — it’s a culture," he says. "We didn’t want a grab-and-go shop. Everything is made to order, made from scratch."

At Wow, the doughnuts are works of art. Nutella Kit Kat, Cinnamon Toast Crunch, raspberry lychee, Elvis (peanut butter, banana and bacon), Key lime mousse, sun-dried tomato basil, cinco leches, and s’mores are just some of the more than 120 types of doughnuts Wow serves. Flavors are continually rotating, and Wow takes inspiration from its customers. Fill out a form online to submit a flavor idea.

The uber-modern interior at Wow Donuts.
Paige Weaver
These doughnuts are about as fresh as you can get. Small batches of doughnuts are baked every few hours, and frosting, toppings and fillings are all added to order. Prices range from $1 for a plain frosted doughnuts to $5.95 for boutique doughnuts.

In addition to the flavors on the menu, you can get a glazed doughnut filled to order ($3) with one (or a few) of the fillings available. The day we visited, the options were lemon, chocolate, white cream, dulce de leche, raspberry, Bavarian and strawberry.

Many of Wow's doughnuts are made or filled to order and come with over-the-top accoutrements.
Paige Weaver
Wow also has traditional cake doughnuts, old-fashioned doughnuts and pigs in a blanket ($2.50 to $3.50).

The interior is an Instagrammer’s dream. From the cases of immaculately arranged doughnuts to the dough puns throughout the shop to the neon pink “Drips” sign above the coffee bar, it’s a clever, thoughtful space.

The coffee is special, too. Wow has an Alpha Dominche Steampunk MOD brewing machine, one of only two in the state of Texas. It’s an app-controlled device; recipes are uploaded via the cloud so that the end product is exactly as the roaster intended.

Wow's Instagram-worthy interior
Paige Weaver
“We are constantly rotating the coffee menu. Different regions of the world have different culture and experience with coffee. At Wow, we can bring it to one place,” Sim says.

The day we visited, Wow had just received an overnight shipment of coffee from Camel Step Coffee Roasters in Saudi Arabia. Camel Step had uploaded the recipes to the coffees it sent. All Wow had to do was get the correct grind size.

“Who knows better what the coffee is supposed to taste like than the roasters themselves?” Sim says.

Wow is open from 5 a.m. to midnight Monday through Thursday and is open 24 hours during the weekend. An outdoor patio is coming soon.

“There are lots of gourmet doughnut shops out there right now, we are trying to differentiate ourselves,” Sim says. With its standout doughnuts, global coffee selection and chic interior, Wow is doing just that.