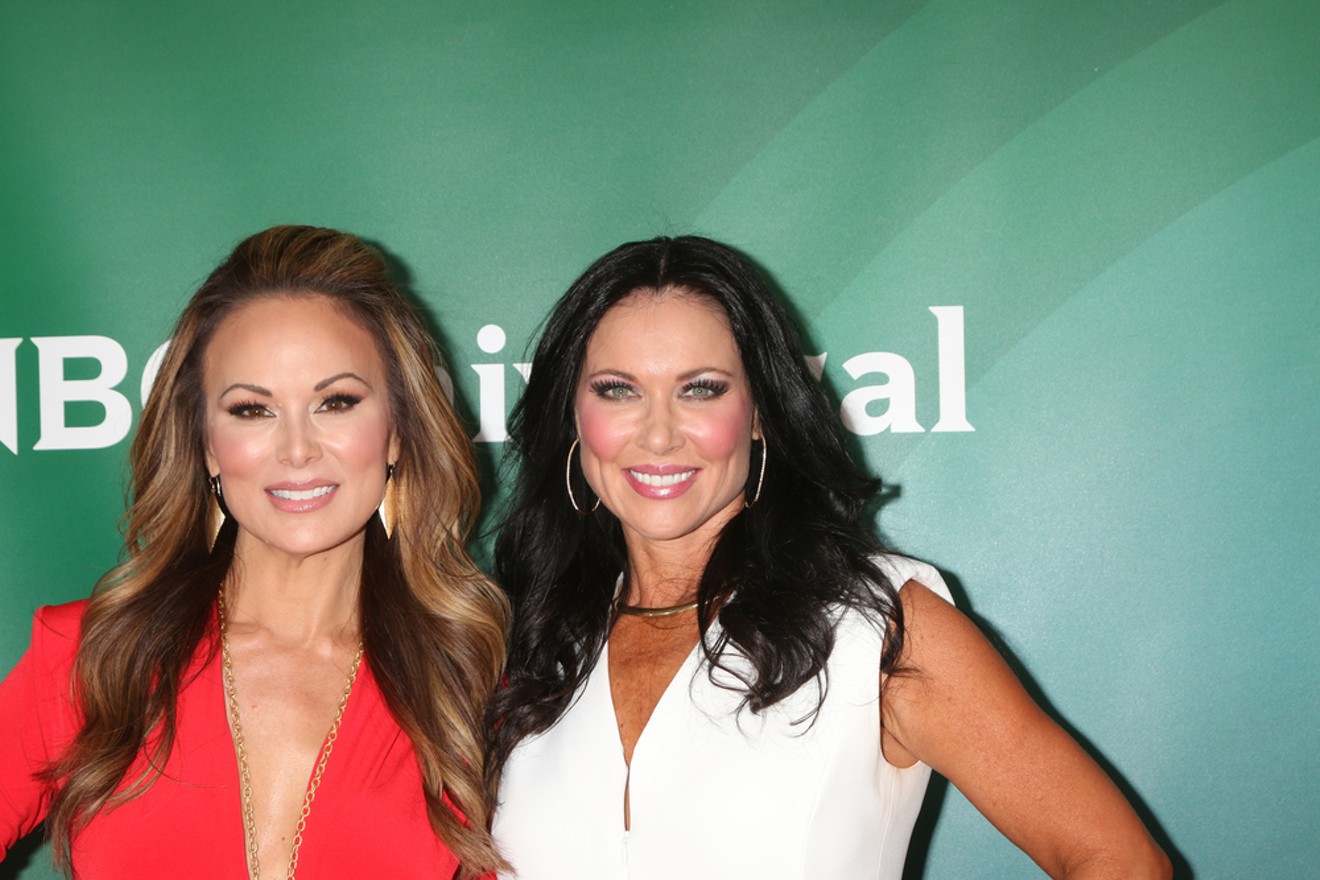 Tiffany Hendra and LeeAnne Locken Shutterstock
A Facebook post by former Housewife Tiffany Hendra made its way around the internet Monday. In the post, Hendra warns women against going on the show. She also calls out Housewives executive producer Andy Cohen for pitting women against one another and profiting from it.

Hendra appeared on The Real Housewives of Dallas' first season. During filming, it was not yet a Housewives series. The women on that season, including Hendra, believed they were taping a show about Dallas women involved in charity. 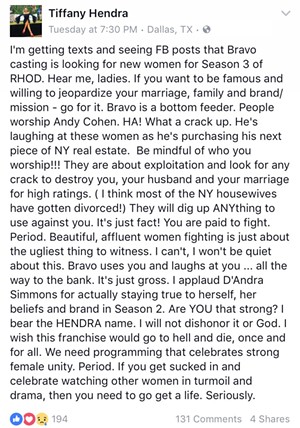 irealhousewives.com
Hendra did not return for season two of the show; it's unclear whether she chose to leave or wasn't invited back. Now she's warning other Dallas women what will happen if they go on the show. She did not respond to the Observer's request for an interview.

"I'm getting texts and seeing FB posts that Bravo casting is looking for new women for Season 3 of RHOD. Hear me, ladies," Hendra's Facebook post reads. "If you want to be famous and willing to jeopardize your marriage, family and brand/mission — go for it. Bravo is a bottom feeder. People worship Andy Cohen. HA! What a crack up. He's laughing at these women as he's purchasing his next piece of NY real estate. Be mindful of who you worship!!!"

Cohen says he doesn't agree with Hendra's post and believes the Housewives franchise is about friendship, sisterhood, marriage and motherhood.

"There is conflict on the show. I think if it was only one speed, if it was only about conflict, it would not have worked for the amount of time that it worked," Cohen tells the Observer. "I think that the backbone of each of these series is friendship.

"I think if you look at Stephanie [Hollman] and Brandi's [Redmond] friendship, their friendship is something to aspire to," he continues. "I think it's one of the reasons people like watching the show is seeing the two real friends who've been friends for years and planned their kids' birth around their friendship and being pregnant at the same time."

Toward the end of Hendra's post, she applauds Housewife D'Andra Simmons, a new addition in season two, for staying true to herself. Simmons' storyline involved her power struggle with her mother in their family business.  Simmons also regularly called out fellow Housewife LeeAnne Locken when she thought Locken's behavior was out of line and played devil's advocate during arguments among other cast members.

"I wish this franchise would go to hell and die, once and for all," Hendra writes. "We need programming that celebrates strong female unity. Period. If you get sucked in and celebrate watching other women in turmoil and drama, then you need to go get a life. Seriously."