"Diamond Sea" is an immersive, beautiful, kinda-bummer of an installation that shows earth’s harvesting in a South African diamond mining region. courtesy the Modern Art Museum of Fort Worth
Walking up to the Modern Art Museum of Fort Worth’s second-floor galleries, you’re greeted by a phone booth pulsating with light. The Wi-Fi-controlled sculpture nods to a less convenient time when apologies, laments and assuring words were spoken publicly on street corners as others waited nearby, impatiently.

It breathes like an X-ray with a heartbeat, emitting a soft, white glow – just like the Apple symbol on your MacBook. No wonder it feels so comforting. It’s welcoming you in a language you understand.

You find that level of thoughtful accessibility at the core of Doug Aitken’s body of work. By co-opting cultural means of mass communication – music videos, advertising, cinema – he’s able to deliver artful ideas in ways that people are conditioned to engage with. Much of this exhibition carries a thematic storyline of the human drive toward connectivity and of the intimacy chasm that develops as we seek community through screens.

There’s an iconic bass line beckoning me into the next room. Then, a familiar “bop-du-bop.”

It’s the old, warm, kind of spooky, Flamingos tune “I Only Have Eyes for You,” and it’s got me surrounded. Designed here as a theater-in-the-round, it envelops you in circular imagery as more than 20 people deliver the song’s lyrics. Some are famous, like John Doe from LA punk band X and art house darling Tilda Swinton. Others are folks from all walks of life.

This piece, “Song One,” is immediately effective in ways I find frustrating and a bit manipulative. My body instantly warms; my eyes well up with tears. And while I understand in my heart that this artist has cracked the algorithm, that he’s pulled the levers needed to deflate my guard and summon my emotions, I don’t give a shit. We live in an imperfect world where it’s too rare a thing to be embraced by so much beauty at once. Plus, I haven’t been serenaded in a while.

Call me a sucker, but I want to stay in here all day.

"Song" is a theater-in-the-round experience where more than 20 people, some famous, deliver the lyrics to the Flamingos' "I Only Have Eyes for You."
courtesy the Modern Art Museum of Fort Worth

I’m roaming through the piece, originally made for and projected onto the Hirshhorn Museum’s 360-degree exterior, with the show’s local curator, Alison Hearst. She’s been working with the Museum of Contemporary Art Los Angeles to pull central works together in a way that makes sense in this space without sacrificing the larger story.

In Los Angeles, this Aitken midcareer survey was at the Geffen Contemporary, a massive beast of an outpost that can be ripped apart and rebuilt as needed. The Fort Worth Modern has reality-based restrictions concerning size and structure but comes with pre-fixed architectural grandeur. This activates Aitken’s work and brings it to stunning life.

While about half the collection shown in LA is here, it’s a really interesting half. And it’s fun to explore. They’ve built rooms inside of rooms, each with custom soundproofing and lighting so you can immerse yourself in a story, then carry its residue on you into the next zone.

It’s interesting that Fort Worth gets to share this show with Los Angeles; no other city will get it. But then again, Aitken is loved here in ways we may not immediately notice. He has work at AT&T Stadium. He’s a favorite of local collectors.

Aitken had his first large-scale U.S. museum exhibition in 1999 at the DMA under the eye of Suzanne Weaver contemporary art curator at the time. And his career-catapulting work, the exhibition’s namesake and show’s closer, "electric earth," has touched the careers of two local museum directors.

Aitken revealed "electric earth," a loose plot of alienation, surveillance and consumerism told through a series of architecturally arranged projectors, in 1999 at the Venice Biennale. It took the international prize. The art world took notice. 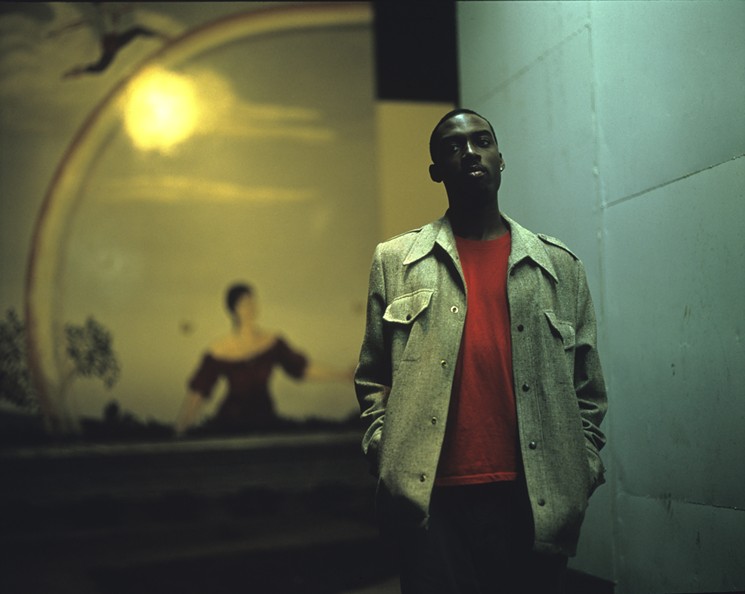 "Electric earth" has a losse plot of alienation, surveillance and consumerism told through a series of architecturally arranged projectors.
courtesy the Modern Art Museum of Fort Worth
The next year, Michael Auping (now Modern Art Museum of Fort Worth's director) put it in the Whitney biennial so the less jet-setty crowd could also enjoy it. Around the same time, Jeremy Strick (now director of the Nasher), was taking a new position as director at the Los Angeles MOCA. David Teiger, a private collector, promised the piece as a welcome gift in Strick’s name.

“For me, it was enormously touching – moving, that [Teiger] did that," Strick says. “And I have to say that seeing 'electric earth' again at the Modern Art Museum in Fort Worth, it seemed to me every bit as powerful, as resonant and as important as it did the first time I saw it. It’s marvelous.”


By co-opting cultural means of mass communication – music videos, advertising, cinema – Aitken is able to deliver artful ideas in ways that people are conditioned to engage with.

Strick first noticed Aitken’s work in "Diamond Sea," which has its own custom-built room at the Fort Worth Modern. It hasn’t been shown locally since the DMA first exhibited it in the summer of ’99, when Aitken was straddling the commercial and art worlds. He was directing music videos and serving as a photographer and illustrator for Raygun, then leveraging those technical tools in his artistic practice.

That interplay dissolved the high-grade production value barrier and allowed Aitken to use film and cinematic principles in "Diamond Sea," an immersive, beautiful, kinda-bummer of an installation that shows earth’s harvesting in a South African diamond mining region.

At the Fort Worth Modern, Hearst, the curator, and I are slowly turning in circles, watching the projections reveal new swaths of landscapes as extraterrestrial machinery mercilessly guts colorful sands. An ambient soundtrack fills the room: recordings of this brutal machinery at work, remixed by groups like Aphex Twin and Gastr del Sol.

“It’s quite disturbing,” Hearst points out. “There’s human activity and human interaction in regards to the landscape, the degradation and mining, but there’s also this passage where there are these wild horses running through – it’s so sad.”

This space feels very ‘90s after the clean lines and peppy tunes of "Song One," and these types of juxtapositions are part of what make this show so successful. You can see how the thematic works of a young, experimental artist evolve into contemporary practice. 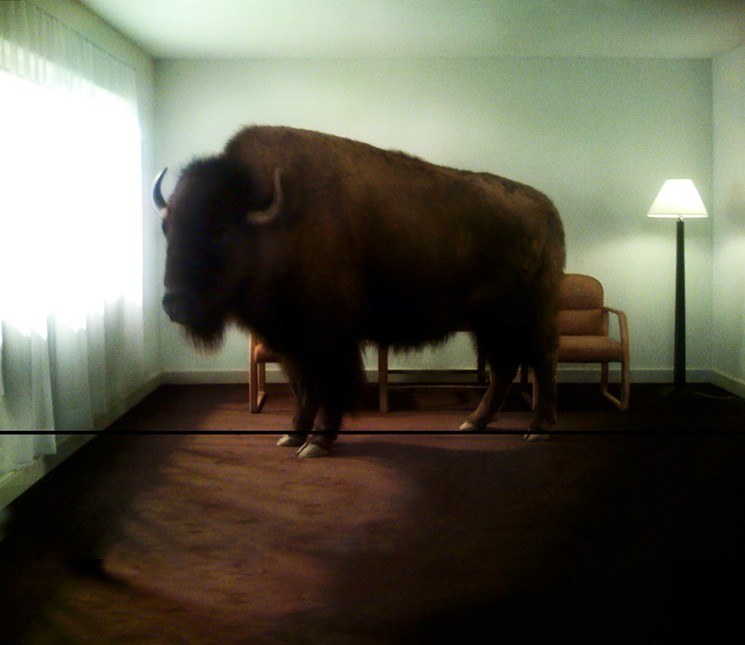 “It’s this idea that these animals are kind of left here on earth without humans,” Hearst says. “So it’s very primal interactions of these vestiges of modern life with these motels and these urban scenarios.”

Then she shrugs and says, “Yup, we ruined it. For us and for them.”

The show closes with "electric earth," which as an individual work uses lowercase E’s, but as a show title is capitalized. You wonder if that’s because the power has shifted as this body of work has grown more robust – a nod to the journey of how a humble storytelling offering 20 years ago fell into its own momentous gravity, building upon itself to fill this entire space with inspiring ideas and cautionary tales.

However the path came to be, this show is a delight to explore, and its accessibility makes it almost too easy to soak in. You’re going to want to stay a while. If possible, go when crowds are light – hot tub rules apply here: a few people are great, but too many kill it. So while human communication and interaction are the core messages being delivered, your modern, conditioned heart will desire solitude, positioned alone with these screens. Welcome to 2017, by way of ’99.

Electric Earth runs through Sunday, Aug. 20, at the Modern Art Museum of Fort Worth, 3200 Darnell St. Admission is $10, but it's free Sundays and $5 on Wednesdays. Pro tip: The parking lot is under construction, so carpool if you can. Visit themodern.org, or call 817-738-9215.

KEEP THE DALLAS OBSERVER FREE... Since we started the Dallas Observer, it has been defined as the free, independent voice of Dallas, and we'd like to keep it that way. With local media under siege, it's more important than ever for us to rally support behind funding our local journalism. You can help by participating in our "I Support" program, allowing us to keep offering readers access to our incisive coverage of local news, food and culture with no paywalls.
Make a one-time donation today for as little as $1.
Jamie Laughlin
Contact: Jamie Laughlin