60 Years Ago This Month, Oak Cliffers Stood Outside to Watch a Deadly F3 Tornado

View of the April 2, 1957, tornado from Live Oak and Liberty Street. Roy Reeves
Below the April 3, 1957, Dallas Times Herald headline “Tornado’s One-Sided Bite” sits a photo of the intersection of Willomet Avenue and Jefferson Boulevard. Its caption reads, “Rootless homes and scattered debris mark the path of the tornado which moved slowly but destructively through Oak Cliff and West Dallas.”

Driving down Jefferson Boulevard today, you’d be hard-pressed to find any discernible evidence of the F3 tornado that touched down in Oak Cliff 60 years ago this month. Until the 2015 Rowlett tornado, it was the deadliest twister in DFW history, killing 10 people – including three siblings from the same family – and devastating parts of Oak Cliff, Arlington Park and West Dallas.

Because it tore through Dallas proper in the middle of an afternoon when visibility was near-perfect, the number of eyewitnesses is remarkable. Nearly everyone who lived in Oak Cliff at the time remembers what they were doing.

Around 4:15 p.m., a funnel cloud started hovering above the intersections of Camp Wisdom and Polk Streets. The sky, by all accounts, was green. From there it made a north turn into Oak Cliff. Fifteen minutes later it reached Kessler Park. Houses began losing roofs near Colorado Boulevard and Winnetka Avenue. It touched down around Singleton Boulevard, but Arlington Park and the West Dallas area near Love Field saw the most devastation. courtesy Dallas Firefighters Museum
There are thousands of photographs and hours of film preserving just about the entire life cycle of the tornado. History, however, has treated it more fickly.

“On one hand, you have this major event that so many people here still remember 60 years later. On the other hand, there’s a lot of people that don’t realize it ever happened,” says Mark Doty, who’s the author of Lost Dallas and the historic preservation officer for the city of Dallas.

Doty has always had a fascination with tornadoes, he says, but particularly with this one. About a year ago he nonchalantly posted something about it on his Facebook page. The response he received was overwhelming.

“I had so many people from Rockwall, McKinney – all over the area – come to me after all this time and say, ‘I remember climbing up on to the rooftop as a 10-year-old to watch the storm,'" Doty says. 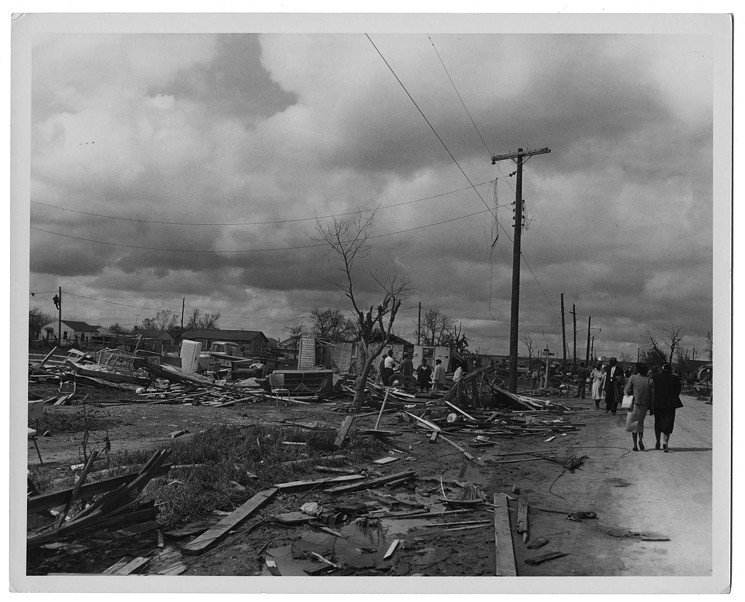 At Vickers and Vilbig
courtesy Dallas Firefighters Museum
In the Facebook group Oak Cliff Boomers, Susan Dortch shares that she was practicing for tryouts with the Sunset High School drill team, the Bisonettes, when the tornado hit. "No one told us it was coming," she writes. "When we did hear, all the girls ran to the front steps and watched it hit power poles and lift things as it traveled on. Lots of screaming girls.”

Other Oak Cliff residents in the group write about seeking shelter in neighborhood businesses. Linda Wylie and her mother, who lived on Rosemont Street, hid out in a nearby corner store. Wylie had been eating a peanut butter and jelly sandwich and watching TV when the paperboy rode past, yelling, "Tornado!"

"I was so scared I did not go to school a day or two; I just wanted to feel safe with my mom," Wylie writes, recalling how many of her neighbors walked around in shock after the tornado had passed, surveying the damage. "After that I could not eat peanut butter and jelly sandwiches until I was 36."

Robert Strickland and Faye King are two Oak Cliffers who have vivid memories of the neighborhood in the hours and days after the storm passed. Strickland remembers hearing of a cowboy boot that had been leaning against the side of one house. The person who picked it up supposedly found a foot inside of it. 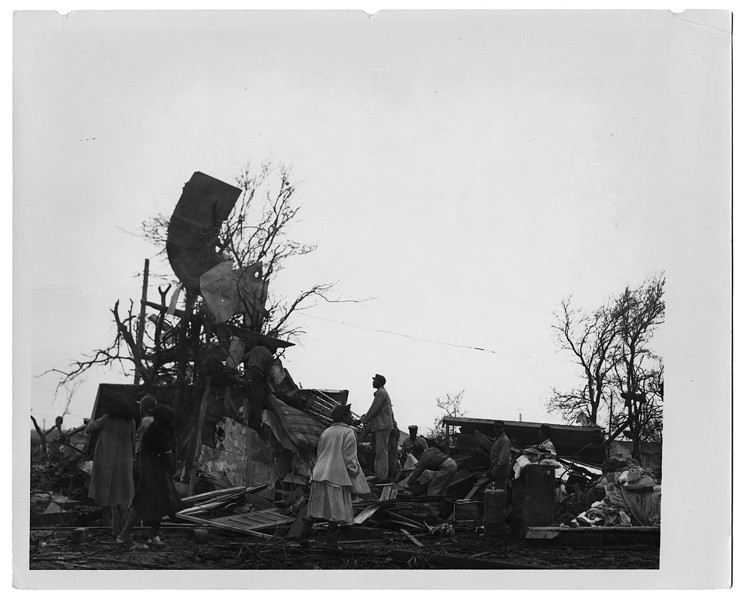 courtesy Dallas Firefighters Museum
For her part, King remembers driving through West Dallas to see that the only parts of homes still standing were the bathroom shower stalls.

In Doty's opinion the 1957 tornado has never gotten the attention an event of its magnitude should. That's why Thursday evening he's presenting a special program about the historic tornado, "Terror from the Sky," at the Turner House in Oak Cliff.

“There’s no memorial; nothing commemorating the 10 people that died," he says. "I think that’s kind of sad, because if you read through the accounts. … I mean, three children from one family were killed.”

Doty is surprised even more people didn't lose their lives to the tornado, since so many people watched it outside.

Several people have told him the same story about a nameless Oak Cliff man who was working as an attendant at a gas station at North Edgefield and Stewart Drive that Tuesday. When the storm hit, he was crushed by a brick wall and killed. He was black. A group of white people had been seeking shelter several feet away in an adjacent bathroom, but they would not let him in. They survived. courtesy Dallas Firefighters Museum
“It definitely fits this narrative of how [the tornado] really affected the minority and poor communities much harder than everyone else,” Doty says.

In 1957, Parkland Hospital was still in its relative infancy, having moved from its original location at Oak Lawn and Maple avenues to 5201 Harry Hines Blvd. three years earlier. It just so happened that, the Friday prior to the storm, Parkland staff had completed an exhaustive, hospital-wide mock disaster drill.

“Everybody knew what to do when the injured and the dead began flooding into Parkland,” Doty says.

If a tornado like the 1957 one were to hit today, he thinks the devastation would be much greater. “It crossed over Stemmons Freeway at one point,” he says. “That scares me to death to think of people caught in rush hour traffic, the way it is now."

Mark Doty and the Oak Cliff Society of Fine Arts will present “Terror from the Sky” 7:30 p.m. Thursday at Turner House, 401 N. Rosemont Avenue. Admission is $15 for OCSFA members, $20 for nonmembers.