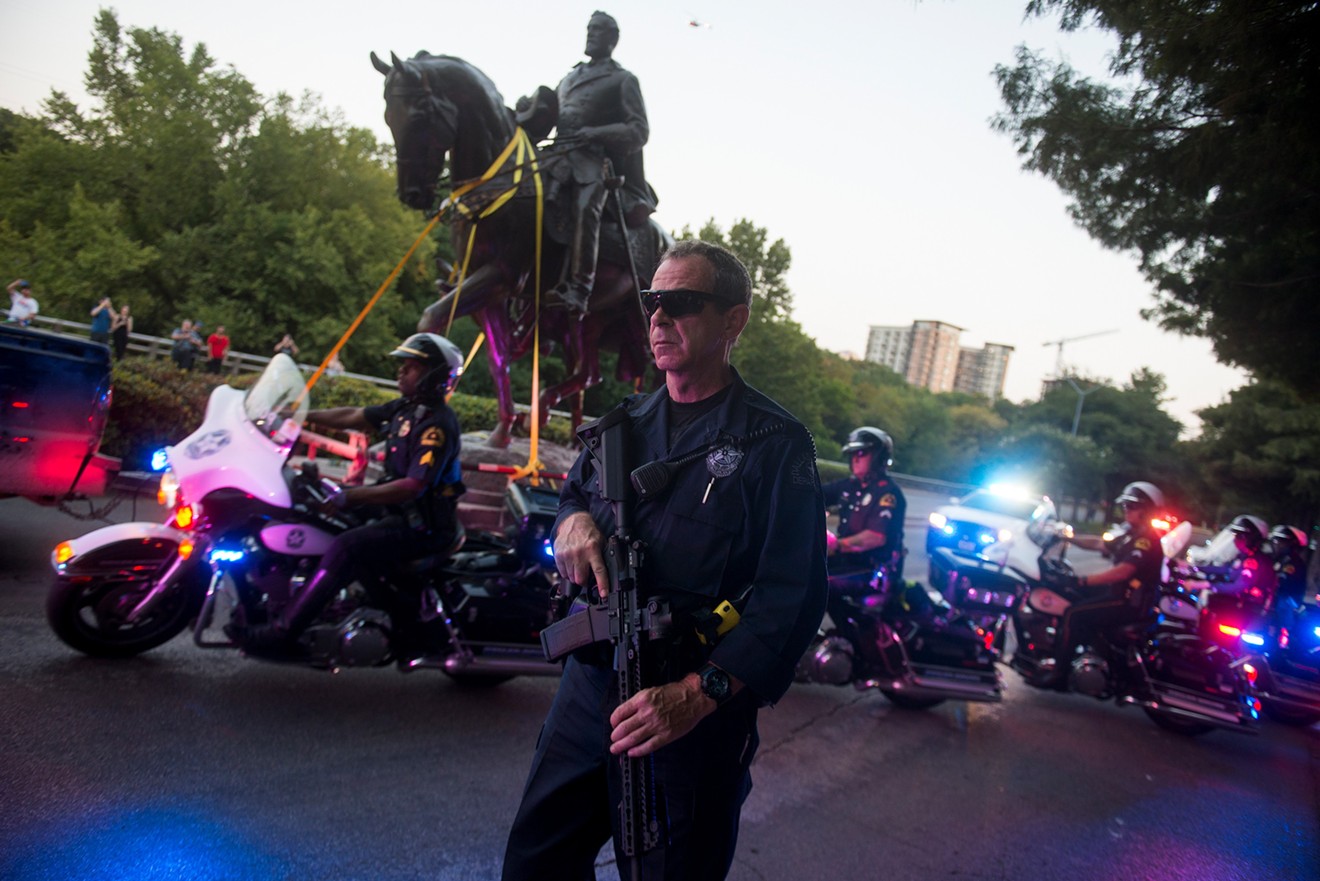 This is not to dismiss the sickening violence in Charlottesville, Virginia, in August, nor is any of us unaware of the Nazi resonance in contemporary racist demonstrations. But the fact is that time has passed since Lee went away, and the worst predictions have been proved utterly mistaken.

However tense we may have been when Gen. Lee was taking his unceremonious powder four months ago, we ought to be breathing a little easier by now. For all that talk of a new civil war, when we look back now, we should be asking ourselves what the chances ever were.

There was never a more Nervous Nellie, boot-quaking Yankee carpetbagger than I was when I came to Dallas a very long time ago, and I think I have made a bunch of mortgage payments with money I earned going on and on about the old, entrenched antebellum oligarchy that was still running Dallas when I got here. But most of those people are dead now. I had nothing to do with it.

Dallas is a different place now. This is an increasingly diverse city of opportunity-seekers from all over the world. I’m sure when the Lee debate was going on, a lot of immigrant kids asked their parents who Lee was. Then they asked what the Civil War was. Then their parents didn’t know. Something between the white people before they got here.

The day Lee came down, I wrote on Facebook about an incident that I did not mention here, mainly because it seemed a little too personal at the time. Now it feels more relevant.

After days of agonizing delay, the statue finally was being lifted off its pedestal, and at that moment, I spied a young woman in the crowd of onlookers who had been a kid on our block 20 years ago. She is African-American, from an old, prominent Dallas family.

But when the statue lifted off the pedestal, she said, her heart began to race. She told me she had never in her wildest dreams expected Dallas to make a statement like the removal of the Lee statue. It meant that her Dallas, the place where she grew up, where her family members had been pioneers and professionals under the onus of race, was making itself over into a new kind of place. That was the spirit of that moment — a spirit of hope and power. That was the takeaway.

I hope what I’m about to say about the people on the other side of the issue won’t sound like a dare or a goad. But so far, at least, there has never been anything about them to suggest they will be raising armies and living in tents any time soon.

We spoke here a month ago about Richard Spencer, the white racist provocateur who once lived in Dallas and attended St. Mark’s School here. My point at the time was that we needed to know who he is and what he’s telling his followers.

That doesn’t mean we should be afraid of him. I don’t know if you have seen him on TV or read what he has to say, but he’s the other side of the coin from the pickup decal guys. This is a spoiled rich kid who runs his world headquarters out of his mother’s lake house. This is not a guy with a stomach for marching on an empty stomach, nor does he come close to having the gravitas of a military leader. He’s a bratty showoff. Nobody would risk his or her life for this guy. 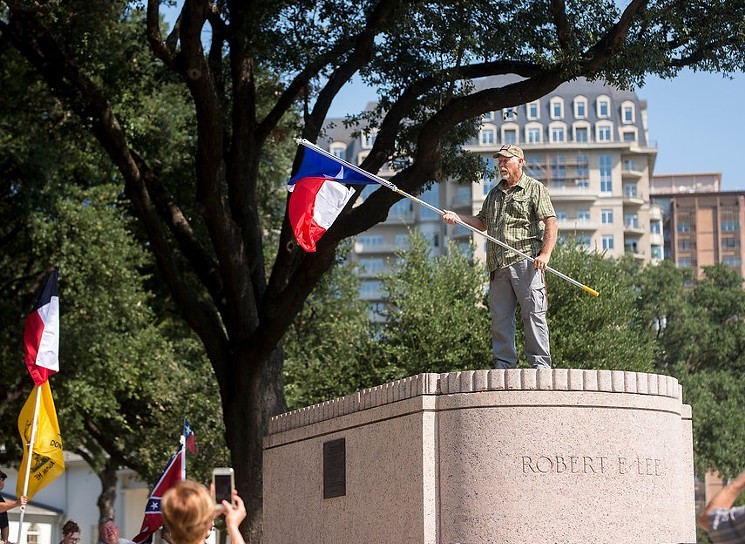 The really tough part of this protest came when the poor guy had to get down from there. And, uh ... about that flag. Oh, forget it.
Brian Maschino
The fear of a white rebel blowback, here and in the country, probably was always nonsense. Most of it is adolescent theater. Did you know that many of those scary-looking so-called “assault rifles” they prance around with are really just .22s with a lot of Hollywood frou-frou stuck on them?

It’s not going to happen. We’re going to endure a monumentally important transition in which our city will be very much like every other major city in the country. For all the storm and stress, we’re going to come out on the other end of it in a much more tolerant, felicitous and productive world. We’re going to like that world a lot better than this one. And guess what? The clock doesn’t run backwards.

Does somebody think we’re going to put the Lee statue back on its pedestal? No. Listen. That young lady I talked to on the sidewalk didn’t think she cared one way or the other until she saw Lee leaving. Now she’s invested. And I’m invested because she’s invested.

I saw that look in her eye. It was bright and happy and full of hope. I’m not going back to mistrust and misery any time soon if I can help it.

I take Spencer seriously in an entirely negative way because the ideas he spews are poison, for whatever reason he may spew them. The guys with the decals on their trucks I take seriously in a less negative fashion because they are people, and people should be taken seriously. But I don’t take any of them as a threat of war.

We can look at our city and extrapolate the long arc of destiny from this moment forward. We are sailing up toward diversity, tolerance, invention and prosperity.

The guys with the Dixie flag decals think they should be sad about it. I think they’ll figure it out eventually. I know they will figure it out long before they agree to wear suicide vests for the likes of Richard Spencer.

We did good when we got rid of Gen. Lee. We are continuing to move toward the good, or at least toward the better. These four months of the general’s absence have been swell. Let’s all look forward to the next 10,000 years.