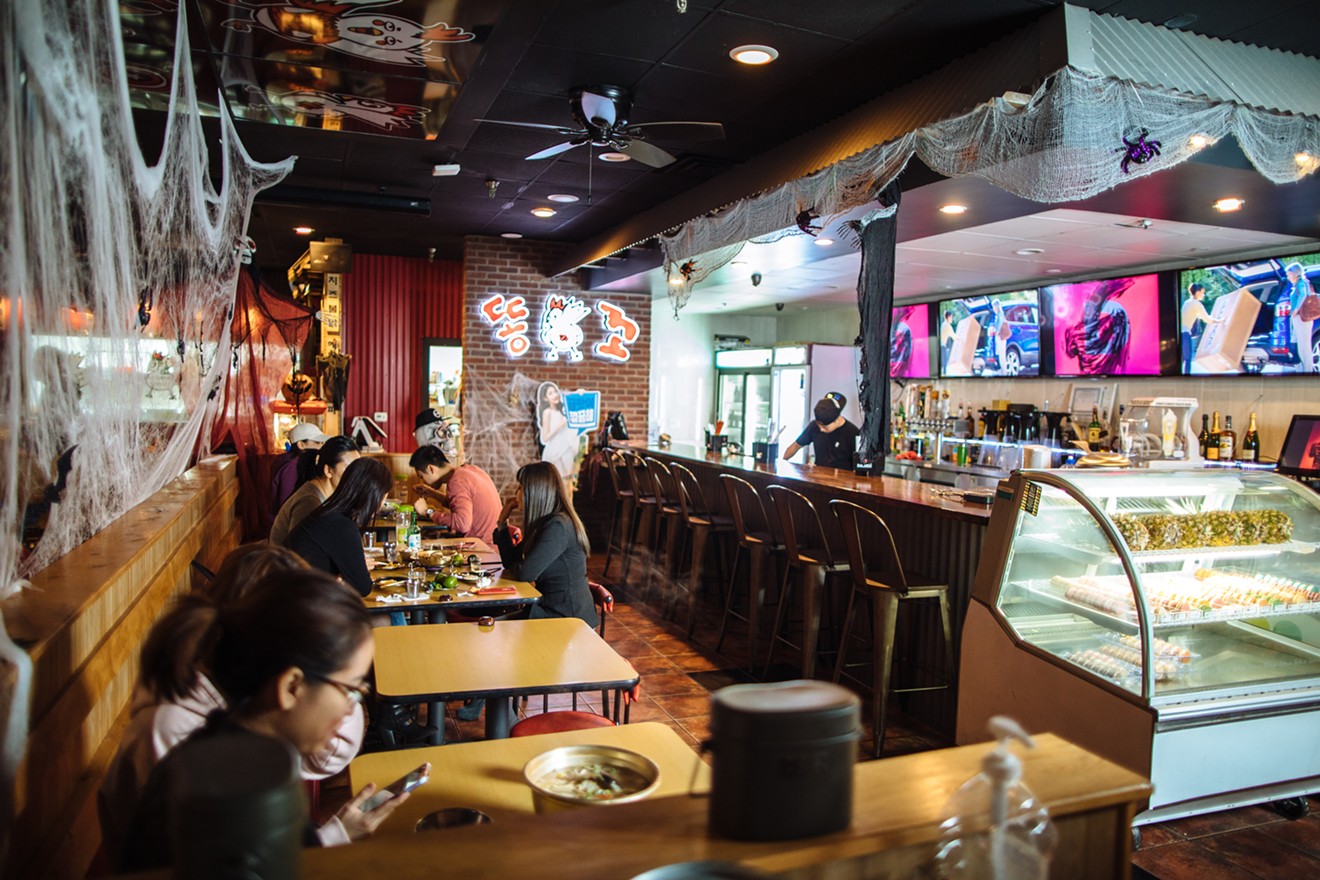 Focus on the chicken and cheese, not the name Ddong Ggo. Kathy Tran
Here are some facts you need to know. Carrollton has a Korean dive bar called Ddong Ggo, in the same shopping center as H Mart. Ddong Ggo is Korean for “butthole.” In the restaurant's case, this refers to a chicken's, which is why its logo is an angry chicken with its, um, butthole censored by a red X. (In fact, chickens have cloacae, a sort of all-purpose vent for ... well, never mind. Enjoy your eggs.)

Ddong Ggo’s house specialty is a dish called Cheese Island ($25). It’s a large cast-iron skillet with dividers running through the middle, filled entirely with shredded white cheese. The skillet is set atop of a burner on the diner's table, so the cheese begins melting within moments. The cheese is the ocean: Cheese Island is the pile of fried chicken wings and fries stacked like Jenga blocks on top.

To be clear, this is a real place. There is a real Dallas-area restaurant named Butthole that sells a Cheese Island. It also makes nacho Cheetos french fries, kimchi pizza fried rice, a soup topped with Kraft singles and a cocktail that’s a pint of watered-down vodka with a popsicle in it.

Who needs the state fair? 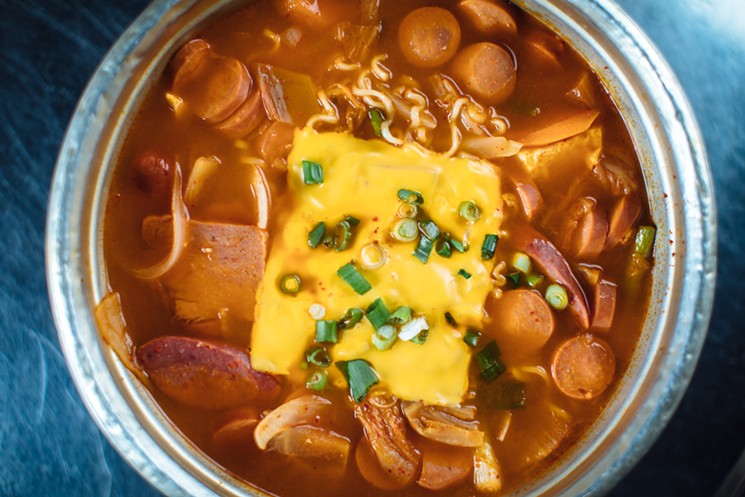 In typical Ddong Ggo style, the Korean Army Stew comes topped with a melty blanket of cheese.
Kathy Tran
Ddong Ggo is a kind of infectious good fun that lesser imitators aspire to but never achieve. The Butthole kitchen takes its comfort and fusion foods seriously. While white restaurateurs in Uptown attempt to create fun Asian bars but leave out the fun and the Asianness, you can head to Ddong Ggo and see the same idea executed by Asian-Americans and raised to stupendous heights of hedonism.

This bar — immensely popular with Carrollton’s Korean community, including older generations who don’t mind the high volume — pulses with energy at all times. Six big-screen TVs blast Korean pop music videos while the songs play on the bar stereo. There are more TVs for sports, photographs of Korean soccer heroes and a graffiti wall blocked off by decorative industrial fencing. Some of the tables are kid-sized, short and squat, with shockingly comfortable tiny leather chairs. 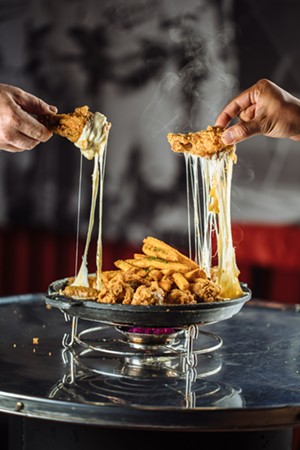 Cheese Island: your new home away from home.
Kathy Tran
At happy hour, which lasts until 8 p.m. some nights, all beer is half off, which means a 3-liter pitcher of Deep Ellum Dallas Blonde, on draft, costs just $18. So grab a pitcher of beer and then look for bar-food indulgences.

Indulgences like, for instance, corn cheese ($9). Here is how you make corn cheese. First, put some plump, yellow sweet corn kernels in a 10-inch skillet. Next, fill the skillet right up to the brim with cheese. Then turn on the heat until the cheese melts. Serve the result in the skillet, as the cheese at the bottom burns to a crisp, bubbly brown.

Molten cheese, especially corn cheese, is a fixture here. The spicy fried chicken with cheese ($20) is, like Cheese Island, a cast-iron skillet set over a burner, but this time one of the dividers is filled with corn cheese, one with plain cheese and the other, largest, divider filled with a stir-fry of chicken, onions, bell peppers and potatoes mixed up in a deep red spicy chili sauce. The stir-fry is pretty darn good on its own, the chicken tender rather than crisp, never dry, but if you’re skeptical about dunking it in cheese, don’t be.

And if you have nostalgia about bites of pizza with trails of mozzarella stringing all over your plate, you can indulge those memories at Ddong Ggo; the strings of molten cheese here are out of control. The cheese appears to be some kind of mild, unsalty midpoint between mozzarella and old-school string cheese, and it’s impressively good in combination with the fried chicken on the Cheese Island platter.

An even more impressive a feature of Cheese Island: the chicken itself. Ddong Ggo makes really good fried chicken, with a crisp, well-seasoned batter, tender meat and not too much salt. Proprietor Brian Chong, who began the Ddong Ggo mini-chain in Los Angeles before expanding it to Texas, plans to open a fried chicken restaurant in Carrollton in 2018. To prepare for the new place, Ddong Ggo is testing a full fried chicken menu with options like garlic fried chicken, “Korean crack chicken” and fried chicken nuggets in a coconut curry sauce.

Unfortunately, the insanely tempting kimchi pizza fried rice is not yet available — a waiter explained that the new menu had been rolled out prematurely — but there are still satisfying side orders to pair with your fried chicken and skillets of molten cheese. The dumplings ($10) are fantastic, an order of 11 pan-fried together into a massive star shape, with thin, tender skins and flavorful meat-and-veggie filling. 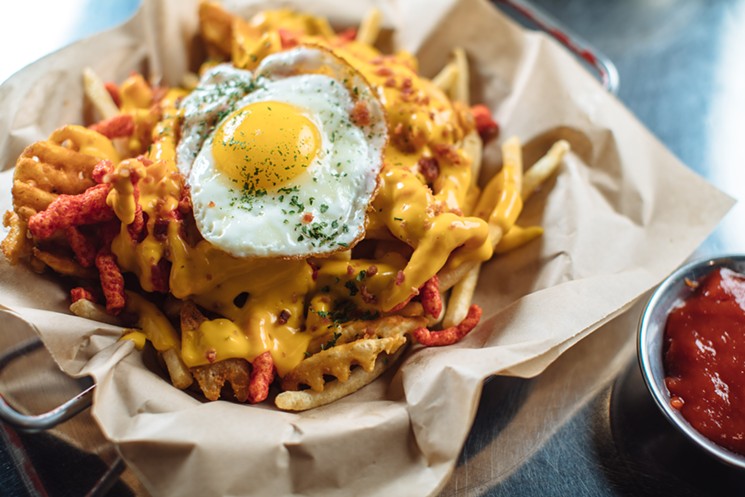 The "Nacho Cheeto French Fries": a beautiful pile of fries and cheese.
Kathy Tran
The “3 Kinds of French Fries” are a sprawling platter of traditional fries, thick wedge fries and large waffle fries ($8). They could be a bit saltier, which is surprising, because Ddong Ggo usually shows no regard for your health, but they’re fine, especially the wedges and waffles.

In fact, if you’re trying to eat healthily at Ddong Ggo, you should probably stick to the “shake boxes” ($9), so-called because they are a collection of rice, veggies, egg and sauces presented in a box for the diner to shake together into a satisfying mixture. The veggie shake box is a rather wonderful twist on, say, bibimbap, with rice just sticky enough to clump together; a generous mixture of zucchini, mushrooms and other vegetables; an over-easy egg and enough spicy red chili sauce to make the whole thing sing.

The best thing about Ddong Ggo is that it’s even better than it sounds. Yes, its name is Butthole. Yes, its front entrance has a large artwork featuring a woman dressed like Carmen Sandiego walking a high-heels-and-pearls-clad chicken on a leash. But this place has an energy that can’t quite be described using ordinary, rational means. Is it the surprising amount of care and seriousness the kitchen lavishes on ingenious drunk foods? Is it the absurdly cheap pitchers of draft beer? Is it the Korean music videos? Is it the joy of dunking fried chicken in molten cheese?

Whatever this bar’s secret might be, Ddong Ggo is dive perfection. It’s a manic masterpiece. It’s the most exquisite butthole in Dallas.