Louie’s Blissfully Ignores Dallas Food Trends, and This Dive Bar Is All the Better for It 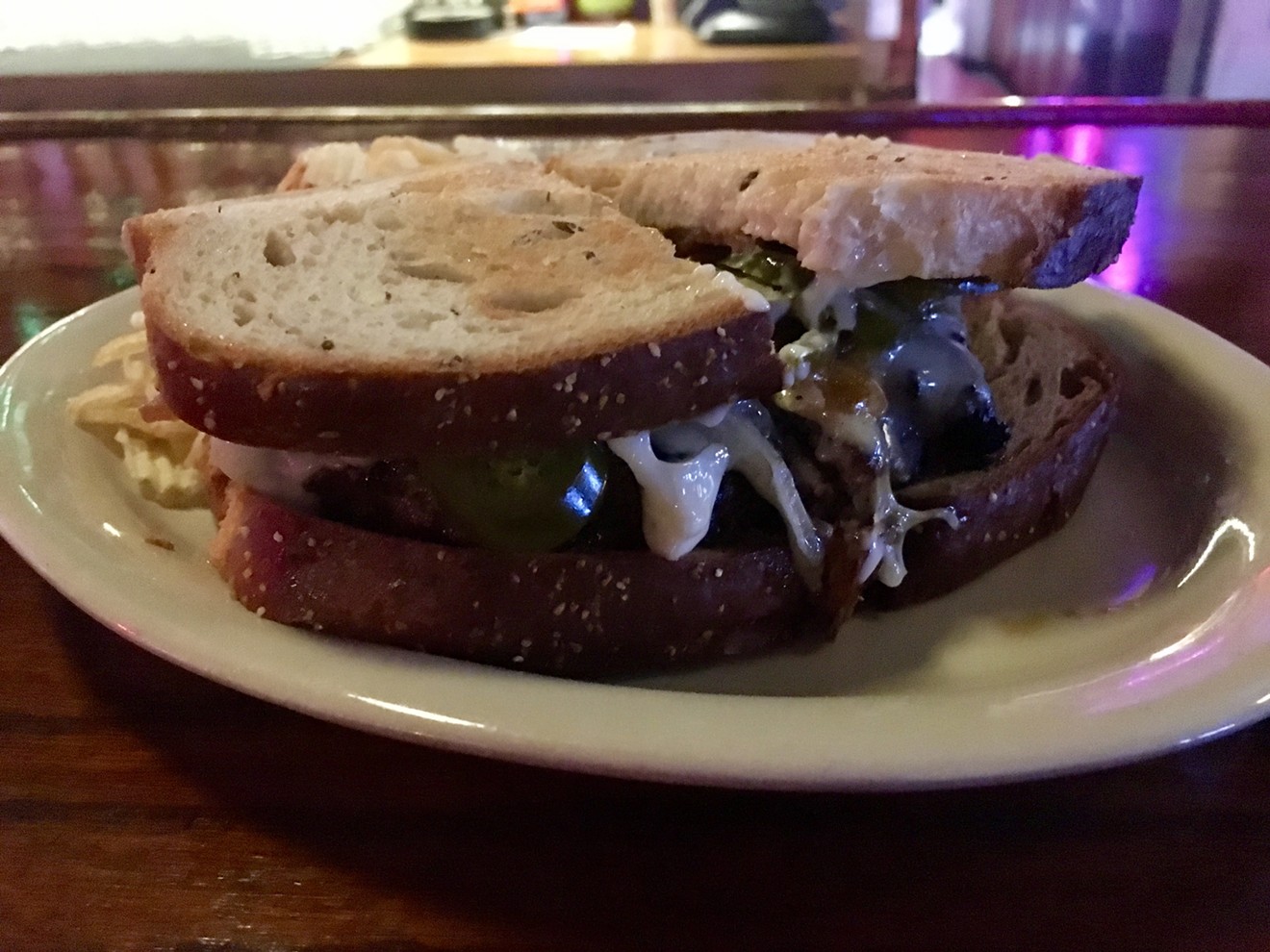 A patty melt with bacon and jalapeños, aka the Don, at Louie's. Nick Rallo
All-American is a series that looks at beloved, longstanding North Texas eateries and examines their history while exploring how the food has changed — for the good or bad — over the years.

In November 2013, Louie’s lost its frontman.

The East Dallas bar was about 26 years old at the time, a handful of years past a spark in business from Guy Fieri’s Diners, Drive-Ins and Dives. But the mark of the Fieri isn’t why Louie’s was and still is a must-stop spot. The reason you stop at Louie’s is imbued into the name.

“For 27 years, he sat out in front,” Chris Canelakes says of his brother Louie Canelakes. “He made friends with Dallas. When this guy passed away, it was like a head of state passing. He filled a church, not a dry eye in this house. Everybody in there was truly his friend.”

Canelakes talks about his brother in a way that will make a lump form in your throat. Louie was a friend, a storyteller, and an expert in all things Jeopardy. He stayed up late one night, shooting the shit with a local man named Don Merritt. Merritt had the idea to load up one of their burgers with bacon, jalapeños and their sheer, thin onions. Louie and Chris loved it, and it lives on the menu today: the Don ($13). To Chris, and surely to many patrons of Dallas’ almost 30-year-old dive bar, Louie is, and was, the heart of the bar.

This May, Louie’s will celebrate their 30th anniversary of being a dive-bar-meets-pizza-joint on Henderson Avenue. Are they doing anything special?

In the late ’80s, the place was jam-packed with Times-Herald and Morning News writers on deadlines. Cigarette smoke and shatter-thin pizzas circled tables. Later, folks would pile in after Rangers or Stars games.

I’m there on a weeknight, waiting for the Don to arrive. It’s a Tuesday evening, and the place is packed. A couple of folks wander in after me and sit to wait at a table. A gentleman next to me is nursing a martini, and onion and pepper-topped pizzas are flying out of the kitchen.

Taryn Walker
“When we first opened up, it was a straight bar,” Canelakes says. “We served food but ... it was a novel idea.”

In 1996, Canelakes added “the left side of the menu” to meet the challenges his little bar was facing — like decreased parking — head-on. Blissfully ignoring food trends, Louie’s still offers beauties like a grilled pork chop, shrimp scampi or a corned beef sandwich. Steaks come with a baked potato, rice or broccoli.

Canelakes is sporting a gray Louie’s T-shirt as he drops the Don, bookended by toasted rye like a patty melt, at my table. Guy Fieri described it as “mondo juicy,” which is not wrong. Neither is the crispy bacon and mellowed-out jalapeños, which always work when saddled against the grilled 81 percent Angus beef, 19 percent beef-fat patty.

Fieri also touted Canelakes’ pizza-making skills, which are the main attraction at Louie’s. Ignore your Neapolitan margherita instincts and order Louie’s pizza with onion, green pepper, Italian sausage and plenty of red pepper. The crust is Christmas-card thin, and it shatters when you fold it in half. It’s great drunk food.

There’s enough heart in Louie’s that it spills out into the sidewalk. On my recent visit, a look around reveals that people are bursting with joy at every table. When stepping foot in Louie’s, leave your bullshit cynicism at the door.

“You would have loved my brother,” Canelakes says. “That’s why I gotta keep it going as long as I can. As a tribute to him.”

In other words: Guy Fieri may have cased the joint, but that’s not why, on a weeknight with a star-studded lineup of restaurants down the street, Louie’s is still packed.