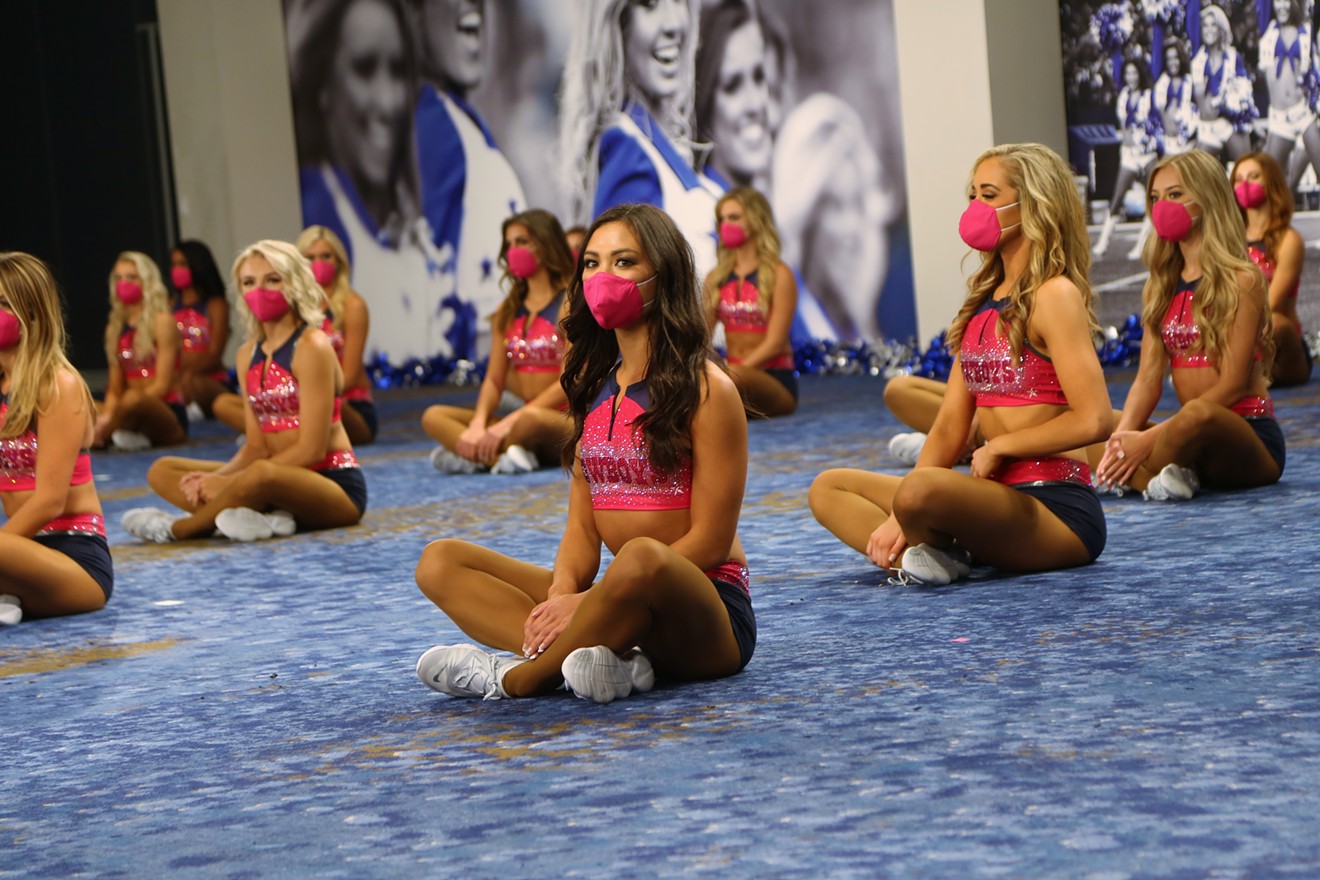 During the second episode of the 15th season of Dallas Cowboys Cheerleaders: Making The Team, the reality show that chronicles DCC hopefuls through the audition process, DCC director Kelli Finglass fitted the women for their potential uniform.

This segment happens every season and in past seasons, it was usually filled with comments from Finglass on the women's bodies. "If they have a really squared body type, it just doesn't work in our uniform," Finglass said on a past season, along with "If we just can't make a uniform look good on her, then it would play into being cut," and "Rachel is long and lean. I wish she was a little curvier," and "Today we had a little bit of thigh and butt running together, so we’re calling it a thutt."


Season 15's segment didn't have any of that kind of language; instead Finglass simply said the uniform had to fit the women "properly" without offering any specific details or comments on the women's bodies.

When Finglass fitted Armani for her uniform, it cut to a previously-filmed segment about Armani's life growing up. She shared that her dad was in the Army, so she had to "step up" and help her mom with raising her two younger brothers.

"My mom is amazing," Armani says, crying. "I love my mom so much. She gave up so much for us. Even though we didn't have the most traditional childhood, we still did get that love."

This is a stark contrast to when Meagan Pravden appeared on season 9 of Dallas Cowboys Cheerleaders: Making The Team. When Finglass fitted her for her uniform, Finglass noted Pravden's "thutt," a term she coined to explain Pravden's butt and thigh running together. The comment proved especially frustrating for Pravden because Finglass said it wasn't about losing weight.

"We think you're a great performer and a great style dancer," Finglass told Pravden on the show. "I don't think our uniform fits your body, and that was kind of evident in the uniform fittings yesterday. You can't change your body, and you don't need to lose weight. You're just a stockier build for this uniform."

The words affected Pravden even six years later, she told the Observer in an interview earlier this year, when she said she was still dealing with body image issues. She's now dedicated her Instagram to helping women accept their bodies.

"I’m encouraged but not surprised by the lack of mention of the women’s bodies this season," Pravden tells us. "The Cowboys are certainly reacting to the public's less-than-favorable opinion of their previous body-shaming tendencies on the show.

"It’s certainly a step in the right direction, which I commend them for, but there is more work to do in the areas of diversity and body inclusion on that squad."

Pravden said she isn't sure how much things have changed, considering two seasons in a row have featured a woman passing out or nearly passing out because they hadn't eaten all day.

"My concern is at its core the organization has not changed but rather taken those conversations about weight out from in front of the camera," Pravden says.

The Dallas Cowboys did not respond to a request for comment.

Dallas Cowboys Cheerleaders: Making The Team airs at 9 p.m. Tuesdays on CMT.
KEEP THE DALLAS OBSERVER FREE... Since we started the Dallas Observer, it has been defined as the free, independent voice of Dallas, and we'd like to keep it that way. With local media under siege, it's more important than ever for us to rally support behind funding our local journalism. You can help by participating in our "I Support" program, allowing us to keep offering readers access to our incisive coverage of local news, food and culture with no paywalls.
Make a one-time donation today for as little as $1.