The Life of Justin Johnson, aka Alyssa Edwards, Is Now a Netflix Docuseries, Dancing Queen 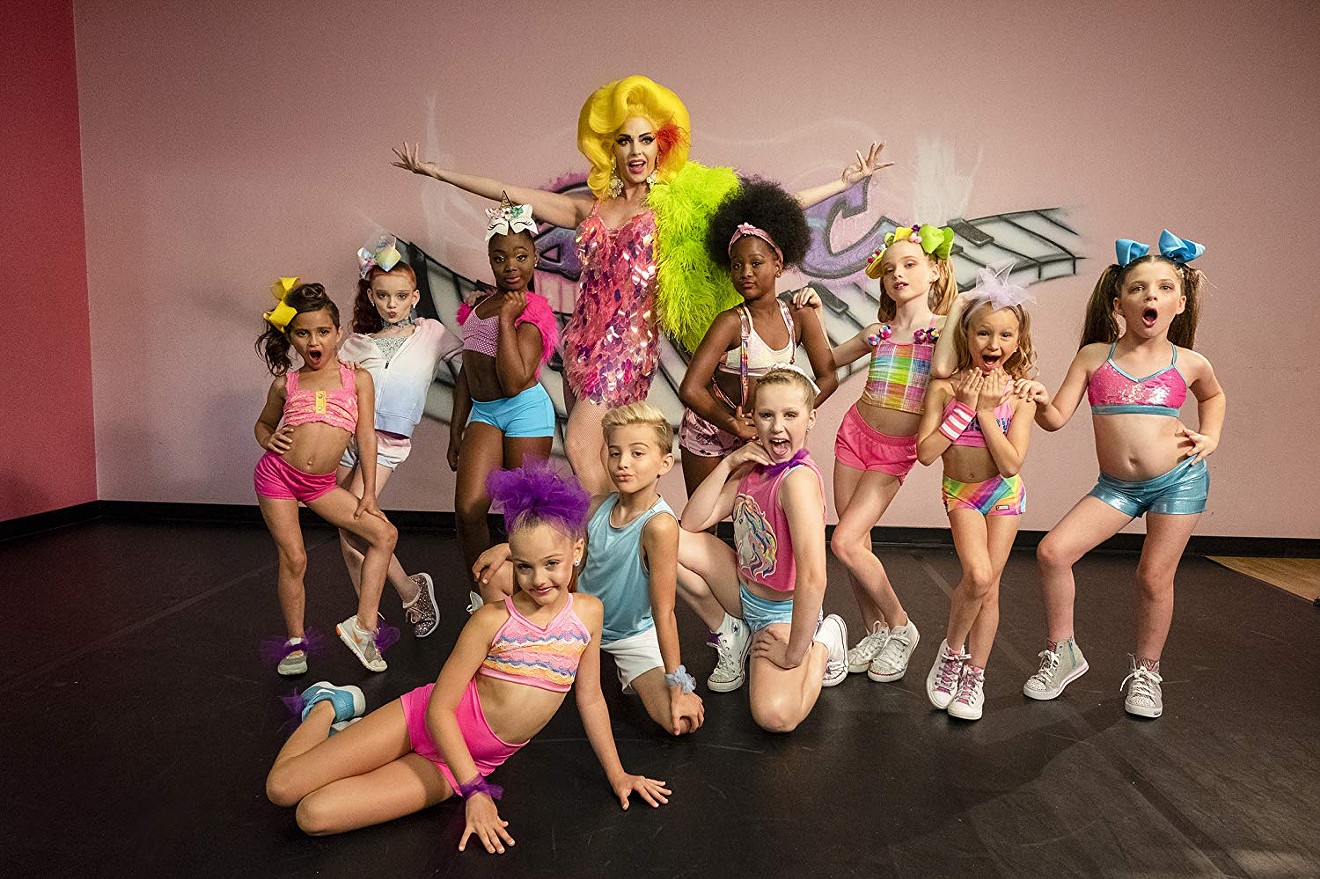 It’s about 40 minutes after 7 p.m. and the Beyond Belief Dance Company dance moms are wondering where owner and director Justin Johnson is.

“You know he always has to make an entrance,” one mom says to the other.

Johnson is fashionably late to his own party celebrating the opening of the new Garland location of his award-winning dance studio. The 38-year-old eventually shows up wearing pink velvet loafers, navy slacks and giant Buddy Holly glasses. Current and former students greet him, but it’s the dance moms who are drinking, gossiping and enjoying a night out.

Beyond Belief Dance Company's previous location in Mesquite is the backdrop to Johnson’s new Netflix docuseries Dancing Queen, and the dance moms fuel the drama from the first episode. When one mother's daughter doesn't make the elite team, she chews Johnson out in front of everyone.

"This atmosphere, we feed off of," Andrea Canterbury, a dance mom, says. "You know, we love the energy and being in front of the camera. It kind of inflates it and it brings out the best, I think. It can bring out the worst in some, but I was prepared to bring out the best in me and my daughter."

Dancing Queen is one part Dance Moms, one part Ru Paul's Drag Race, but unlike other reality shows, Johnson was adamant that this one not be scripted.

Raised in Mesquite, Johnson, a young boy, took his first dance class. As a way to continue to perform, he created his drag persona, Alyssa Edwards, and has since won more than 15 drag titles, including Miss Gay America 2010. Edwards competed on the fifth season of RuPaul’s Drag Race and the second season of Drag Race's "All Stars," cementing her as one of America's favorite drag queens. She regularly performs at Round-Up Saloon and even performed in a one-woman show at South Side Ballroom. In 2003, Johnson opened Beyond Belief Dance Company.

His balancing act as a drag queen and small town dance studio owner caught Netflix's attention, and now he's the star of the streaming service's first reality TV show. The majority of the show documents Johnson's life as a dance studio owner, dance teacher, mentor to the young dancers, as well as how he handles the competitive dance moms. His drag persona, Edwards, plays a smaller role.

"It was very important to me because this show could have went a lot of different ways, you know, and this is my life." – Justin Johnson


"It was very important to me because this show could have went a lot of different ways, you know, and this is my life," Johnson says. "If this ever happens ever again, I want it to be portrayed authentically."

There is no difference between Johnson on the show and in the studio Friday night. Johnson is upbeat, explaining how he wants this show to be something positive for him and the young dancers.

Johnson, who refers to himself as the Steven Spielberg of dance, is the show's main character, and he carries the eight episodes. He's the one teaching the kids their dances and then arguing with their mothers about which dancers are put in the front of the routine.

Never resting on one story line too long, the show flip-flops throughout episodes, with his drag queen alter ego, Edwards, playing an important secondary character. One scene, viewers are watching Johnson judge a dancer's audition and then minutes later, Edwards, in full makeup and wearing a giant blonde wig, is on the screen eating dinner with her drag family.

Johnson says because of its documentary style, Dancing Queen is unlike any other reality show.

“This show is bigger than Honey Boo Boo, the Kardashians,” Johnson says, "all those dance shows. This is my family."

Johnson refers to his studio's dance moms as his extended family and mouths off each woman's phone number to prove how well he knows them. In Dancing Queen, he says his assistant Dawn has watched him grow up, so she's the one he takes to look for a house to buy.

“[Kristen DuBose] was at the studio, even if her kids weren't dancing,” Johnson says about a dance mom. “She would be there, you know, helping. There was a moment where me and her were so close, so close. You know what I mean; she slept at my house before. You know we were so close that we would start to, like, clash.”

Clashing is just a small road bump in the relationships these women have with Johnson. And Johnson knows about clashing. He opens up on the show about his parents' divorce tearing him and his sisters apart, and he has said his father wasn't supportive when he came out.

There is clearly a queen of Beyond Belief, and Johnson wears the crown proudly. The dance moms may talk back or disagree with some of his decisions, but they still show up every week and pay for their child’s lessons every month. These women's friendships seem to go beyond their connections because of their children. During one episode, all of the dance moms gather to drink by a bonfire. No kids are in sight.

“He brings people together,” DuBose says. “Because, if it were like me saying  'Let's go to the haunted house,' I would hear nothing from them. He says it and everybody jumps in their car. 'We're going, we are on the way.'”

"I'm a big kid. I love to do that shit," Johnson says, giggling. 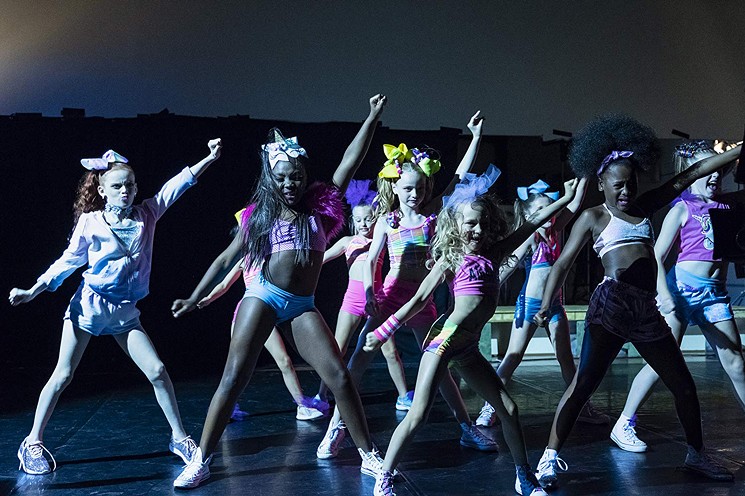 Netflix's Dancing Queen follows the dancers of Johnson's dance studio in Mesquite.
courtesy Netflix
Johnson's life as a dance studio owner and life as a drag queen seem to be two separate things. The young dancers know about his alter ego, but they seem to care only about Johnson's approval of them. But close your eyes and there isn’t much difference between Johnson and Edwards. They both exude an over-the-top degree of sassy. They both do a tongue pop, making a clicking noise with their tongue. Edwards, of course, has more hair, makeup and breasts, but the two personalities are interchangeable.


“He knows what he is, but he's himself, he has a character, he has a personality that just lights up any room, and sometimes people are intimidated by people that are very secure with who they are.” – Justin Johnson

Edwards' mannerisms carry over, too. Even when Johnson is out of drag, he regularly motions his hands to push his non-existent hair behind his ears.

As a boy growing up in Mesquite, Johnson says, his flamboyance wasn’t welcomed, which led him to create Beyond Belief Dance Company, a place that could be a safe space for any other little Johnson.

That other little Johnson would be J.J. Garza, who Johnson calls his mini-me. The 10-year-old is one of the few boy dancers at the studio, and in an episode of Dancing Queen, Garza dresses up as Edwards and prances around. Johnson says while Garza's elementary school might not celebrate him, his dance studio does.

“He knows what he is, but he's himself, he has a character, he has a personality that just lights up any room, and sometimes people are intimidated by people that are very secure with who they are,” Johnson says about Garza. “And, for myself I was very insecure, because that had me going into a shell as a little boy. I didn't know, I had four sisters, they polished their nails, I polished mine.” 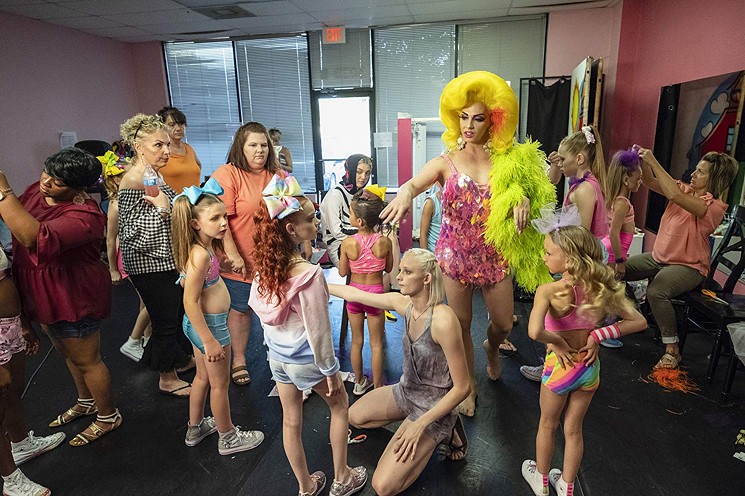 Dancing Queen is Netflix's first reality show.
courtesy Netflix
Garza says his friends don't tease him about being on TV.

"They're all like, 'I'm excited! I'm friends with a famous kid,'" Garza says.

During almost all the episodes, there is a music video in which Edwards lip-syncs and dances. During the second episode, it's Shania Twain’s “Man, I Feel Like A Woman” in the crowded Round-Up Saloon in Dallas, and during the last episode, Edwards performs to her original song.

"I feel like this studio grounds me and reminds me what it's like to feel something," Johnson says. "Because being onstage in drag, I like it as a job now. It's part of me as a performer, but I don't wanna live vicariously through the kids, but a part of me loves being Steven Spielberg."

Dancing Queen is now streaming on Netflix.
KEEP THE DALLAS OBSERVER FREE... Since we started the Dallas Observer, it has been defined as the free, independent voice of Dallas, and we'd like to keep it that way. With local media under siege, it's more important than ever for us to rally support behind funding our local journalism. You can help by participating in our "I Support" program, allowing us to keep offering readers access to our incisive coverage of local news, food and culture with no paywalls.
Make a one-time donation today for as little as $1.