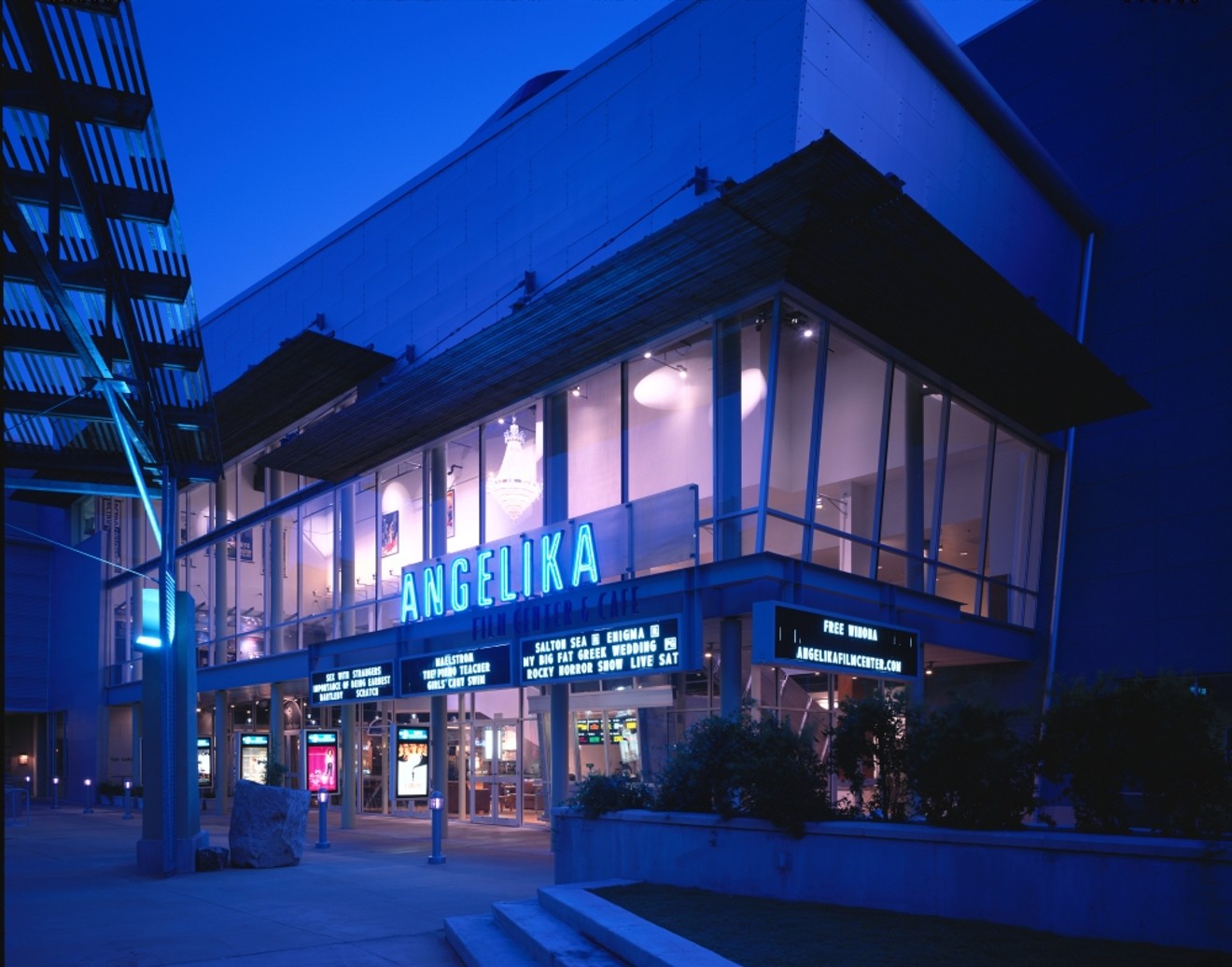 The Angelika Film Center is one of North Texas' best theaters. Courtesy of Angelika Film Center
It’s no secret that the theatrical cinematic experience has been a true roller coaster ride in the last few years. Even before shutdowns related to COVID-19 changed the moviegoing experience forever, movie theaters had been struggling to adjust to modern audiences’ preferences for seeing new movies. Given the popularity of streaming services like Netflix, Amazon Prime, HBO Max, Hulu, Apple TV+, Disney+ and more, many viewers (both young and old) were catching new flicks at home instead of in theaters.

There’s also a deep inequity in the types of films that studios are producing. A film like Moonlight (which won the Academy Award for Best Picture) cost $1 million to make; comparatively, Avengers: Endgame cost over $350 million. How does that compare to television? High-profile streaming projects like The Mandalorian, House of the Dragon and Stranger Things routinely cost over $20 million per episode. With acclaimed films like CODA and The Power of the Dog headed to streaming and theaters simultaneously, the definition of a “film” itself is ever-changing.

However, that doesn’t mean that there’s reason to give up hope. The outstanding box office success of recent films like Spider-Man: No Way Home and Top Gun: Maverick indicates that audiences will turn out if they feel that there’s an “event-like experience.” There’s also hope in the specialty box office, as smaller films like Tar, The Banshees of Inisherin and Triangle of Sadness have been doing well this year on a per-screen average.

Not every metropolitan area has a healthy cultural scene, but Dallas cinema fans have a multitude of options at their disposal. Although some of our favorite theaters have recently closed, you can guarantee you’ll have a rewarding cinematic experience if you check out one of these:

Angelika Theater Dallas
5321 E. Mockingbird Lane
Looking to catch up on the independent films that seem to be playing only in New York and Los Angeles? Dallas’ Angelika Theater is often the premier sight for indie films, documentaries and international features that generally don’t get wide distribution. If you’re the type of fan who likes to see films early, you might want to browse your social media pages to see if the Angelika is hosting any preview screenings.

Angelika Theater Plano
7205 Bishop Road, Plano
Like its sister theater, the Angelika in Plano offers the best lineup of diverse films in the North Texas area. However, both theaters also feature their fair share of classic film screenings and speciality events; this past month the theaters hosted their annual “Hitchcocktober” event celebrating the “Master of Suspense” with screenings of Rear Window, Psycho, Saboteur, Rope, North by Northwest and Vertigo.

The Texas Theater
231 Jefferson Blvd.
Deep in the heart of Oak Cliff lies one of the rare theaters in North Texas that can screen classical 35mm prints. Although The Texas Theater screens many mainstream films, it’s best known for its diverse series of older favorites. In fact, this spooky season saw the screening of horror favorites like Re-Animator, I Know What You Did Last Summer, 28 Days Later, Trick ‘R’ Treat and Nosferatu.

AMC NorthPark 15
8687 N. Central Expressway
There’s no better way to get into the movie-going spirit than to walk into a theater surrounded by photos of cinematic icons like Marilyn Monroe, Denzel Washington, Harrison Ford, Jimmy Stewart and Cary Grant. You’re standing among giants! Although “mall theaters” sometimes come with a sour reputation, the AMC Northpark location is an exception. Dallas’ Luke Wilson recently cited the theater as a favorite during his chat with us about 12 Mighty Orphans.

Cinemark 17 XD and IMAX
11819 Webb Chapel Road
IMAX used to be something that you could enjoy for special events at SeaWorld, but it’s become an increasingly popular screening method for Hollywood blockbusters. We recently saw films like Top Gun: Maverick, Dune, and No Time To Die make use of the format for their exhilarating action sequences. If you’re looking forward to checking out upcoming mega-sequels like Black Panther: Wakanda Forever and Avatar: The Way of Water in IMAX, you’ll have to head over to the area’s best Cinemark location.

Inwood Theater
5458 W. Lovers Lane,
Since 1974, Inwood Theater has been the North Texas area’s signature “hangout destination.” With couches, recliners, a full bar and even ottomans, Inwood Theater gives cinema-goers a home away from home. It’s also hosting some exciting upcoming events, including a screening of Empire of Light with a virtual Q&A with writer/director Sam Mendes.

EVO Entertainment Southlake
1450 Plaza Place, Southlake
Have you ever wanted a movie theater within a Dave & Busters? That’s essentially what the EVO Entertainment theater in Southlake is. Although you can certainly check out a wide variety of new flicks, the entertainment center also features laser tag, rock climbing, bumper cars, arcade games, a bowling alley, a full-service bar and a restaurant. Drop your kids off to play some games while you go check out some real movies!

Alamo Drafthouse Cinema Cedars
1005 Botham Jean Blvd.
The North Texas area is lucky enough to feature multiple Alamo Drafthouse locations, with theaters in Lake Highlands, Denton, Richardson and Las Colinas. We’re picking the Cedars location in the heart of Dallas as our favorite, although that might just be because it's the theater that generally hosts the Dallas International Film Festival. You’ve never seen so many Robocop posters in the same place!

Cinepolis Luxury Cinemas
2365 Victory Park Lane
Who says that going to a movie can’t be a team-building experience? The Cinepolis Luxury theater on Victory Lane hosts speciality parties, cocktail receptions, work events and more. If you’re there just to check out My Policeman, you can sign up for the chain’s special loyalty program.
KEEP THE DALLAS OBSERVER FREE... Since we started the Dallas Observer, it has been defined as the free, independent voice of Dallas, and we'd like to keep it that way. With local media under siege, it's more important than ever for us to rally support behind funding our local journalism. You can help by participating in our "I Support" program, allowing us to keep offering readers access to our incisive coverage of local news, food and culture with no paywalls.
Make a one-time donation today for as little as $1.