Dallas Teens JD Beck and DOMi Talk About Being Called ‘Prodigies’ and Playing with Anderson .Paak 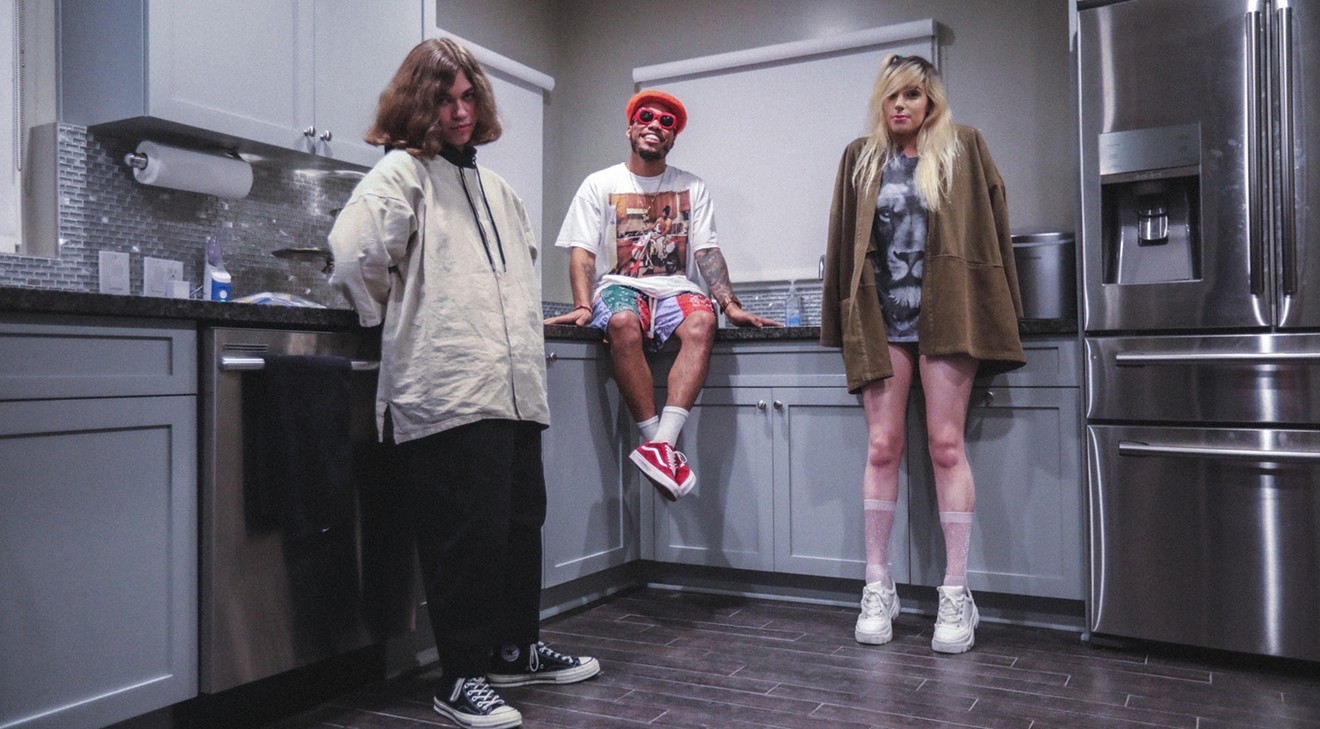 Anderson .Paak seems the most excited at this collaboration, and who wouldn't be? JD Beck and DOMi are prodigious music professionals. Israel Shoots

Midway through our text chat, drummer JD Beck stops me cold. “Hold on,” he sends. “Let me get you a photo from Paak.”

A couple of minutes later, the 16-year-old Dallas musician sends a photo of himself and his bandmate DOMi, a 19-year-old pianist, hanging out in a kitchen. Both wear mildly forlorn faces and look as if they are a little camera shy, but their third friend, the one in the middle of the photo, looks delighted to be there. Perched on the countertop and flashing his omnipresent pearly whites, Grammy-nominated superstar Anderson .Paak is thrilled to be in the company of Beck and DOMi.

One could easily mistake those two for the stars and .Paak for the young up-and-comer, the guy who is just happy to be there. But technically speaking, it’s the other way around: “Paak” is the headliner; Beck and DOMi are his backing musicians, just as they are for people like Flying Lotus and Thundercat.

Beck and DOMi have attracted an impressive list of collaborators with their prodigious talent, but they have mixed feelings about the word “prodigy.”

“We love that people respect and like what we do, but being called a ‘prodigy’ can sometimes sound like they don’t realize the countless hours we’ve spent practicing and writing,” Beck says. “It almost sounds like we just knew everything we play out of nowhere.”

It’s an easy mistake for their listeners to make, myself included. Take, for example, a video DOMi recently posted to Facebook. In the video, the pianist reels off an unnervingly complicated composition from Oscar Peterson, widely regarded as one of the greatest pianists of all time. The video is brief, giving the viewer a small glimpse at the ability of a world-class talent emulating an icon with apparent ease. But if you ask DOMi, it wasn’t easy.

OK, maybe it was kind of easy. For her. But this was not her first rodeo.

“I've transcribed a lot of solos since really young,” she says, first using pencil and paper and now using the score-writing program Sibelius.

“I practiced this solo once, and then asked JD to use his phone to take a video. It was pretty random.”

DOMi, whose real name is Domi Degalle, talks about this feat with the same nonchalance that someone may convey when discussing an Instagram post they recently made. Yet, as Beck will remind me, she is able to talk so casually about her talent because she has spent years fine-tuning her craft. We saw a hastily made Facebook video; we did not see the years of grueling practice, missteps and more practice it took to get within spitting distance of the word “prodigy” and to getting their photo taken alongside Anderson .Paak.

At age 5, Beck started taking music lessons at a small music school in Allen. After a few years of classical and jazz training, he switched to drums and enrolled at the School of Rock. He was placed in advanced band at 9, about six years earlier than most. He developed a penchant for pop and hip-hop and started honing the groovy style that would later catch .Paak’s eye. Beck got help from some funky heavyweights, namely Cleon Edwards, from Erykah Badu’s band, and Robert “Sput” Searight of Snarky Puppy fame, who started mentoring the young drummer when Beck was 10.

DOMi got an even earlier start. Born in France to two music fanatics, she started playing piano and drums at age 2 and made it through one week in kindergarten before mom and dad plucked her out and placed her in the Conservatoire de Strasbourg. The neighbors requested a little less racket from the Degalle household, so DOMi started writing music. At age 5.

She filled up sheet music and

“Being called a ‘prodigy’ can sometimes sound like they don’t realize the countless hours we’ve spent practicing and writing. It almost sounds like we just knew everything we play out of nowhere.” — JD Beck

devoured the catalogs of the greats via Spotify, learning by following along to Glasper, Armstrong and Kreisberg. Unbeknownst to her, she was developing the same kind of funky finesse that would make her the perfect stage companion for .Paak, Thundercat and, of course, Beck.

When it came time to move on from Strasbourg, she applied to Berklee’s College of Music and another conservatory in Paris, earning admission to both and choosing the vaunted New England music haven. When Berklee discovered she did not yet have a high school diploma, they rescinded the offer, only to contact her again a year later and offer a full ride.

On her first day in Boston, the then 16-year-old DOMi, who could not yet speak English, was asked to play in a jam session. Someone pulled out a camera, recorded the master at work, uploaded the video and watched as the video of this furious Frenchwoman frenetically playing the fuck out of a piano earned a million views.

She met Beck at a similar jam session a couple of years later, this time at the NAMM show, the music industry’s largest trade show.

“It was a tiny little booth with an electronic drum set and some weird midi keyboards,” Beck remembers. “We both kinda struggled, and we’re making jokes about how we play, and decided to hang and play some crazy stuff together.”

DOMi traveled to Dallas to play at Badu’s birthday with Beck and decided to stay for a few days. Beck showed DOMi how to use Instagram, the two played music all day and night, and decided to form a band. After uploading many videos like the Peterson performance, Beck and DOMi’s follower numbers skyrocketed.

Anderson .Paak was among their hundreds of thousands of new followers, and the funk star introduced himself to Beck and DOMi at a New Orleans show. The teens went to the Big Easy to play for Thundercat and left with a new collaborator: the man Beck now knows on a last name basis. He can text “Paak” whenever he likes, but Beck is quick to disavow me of the notion that this gives him some kind of unimpeachable street cred.

“We can be treated unfairly because we’re young,” he says. “Even dealing with sound engineers and things like that. They talk to us like we’re 5 and think we don’t notice it. We do it because we love it, though.”

And they love playing together, even more than they love jamming with .Paak.

“JD is the fucking best,” DOMi says. “I don't really have to care about extra stuff when I play with him. We are on the same page when it comes to pretty much everything, so writing is super easy.”

That easygoing relationship has made it easy to live and record together at all hours. The duo splits their time between Dallas and Los Angeles, and when they are not traveling to play shows with their growing list of famous friends, they are hard at work on a debut album of their own. It will include some remixes of songs by people like .Paak, but also some original material inspired by lesser-known artists the pair admires.

“We’re motivated by blending and finding new things with music,” Beck adds. “We constantly try to create stuff we haven’t heard anyone do. Hearing a new recording of some crazy musicians or finding pretty new chords is always super motivating.”

They also share an indelible curse, one that keeps them up, day and night, and plagues their minds with ceaseless noise.

“We’re always motivated to write,” Beck says. “It’s an instinct; we don’t even really think about it. And it’s constant.”

As I talk to Beck and DOMi, I marvel at my mortality and their preternatural talent. I cannot resist comparing my teenage years with theirs, and wondering if they care about the same things I cared about then. “What are their days like?” I wonder. In other words, I can't help myself from placing upon them the label that Beck and DOMi would rather avoid. The word “prodigy,” with all its positive implications, also comes with a lot of baggage.

So, I finally conjure the right sentiment, “What is a typical day like for you?” which I ask them separately, because I am worried that as master musicians and friends of celebrities, they will think I am foolish for asking such a simple question.

Their responses are succinct, and they both say the same thing.