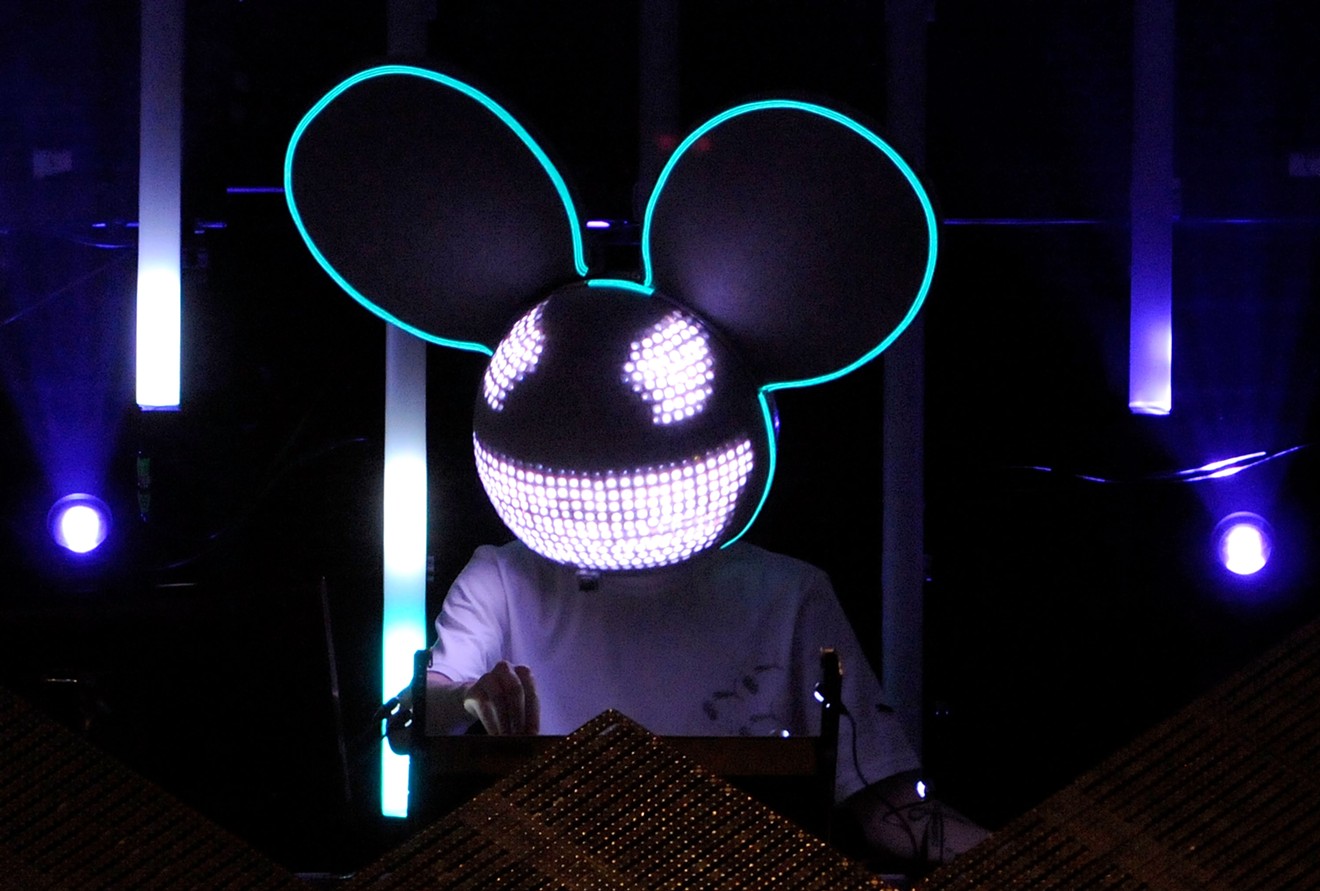 Disney taught us that mice are friendly, but Deadmau5 only wants to talk about acronyms and his "Cube." Michael Tullberg/Getty

When Joel Zimmerman’s, aka Deadmau5's, team of handlers offered an interview ahead of his Sept. 12 and 13 shows at South Side Ballroom, I thought “OK, fine.” A conversation with Deadmau5 seemed like fun, after all. He’s a talented musician and no-filter guy who likes to rant about everything and everyone. He called Justin Bieber "a little fucking dickhead," insulted Zac Efron’s intelligence and marked Skrillex a puppet.

Not unheard of, but rare, his team asked to preview a few questions ahead of the conversation. Perhaps they feared their client would be peppered with questions about his Twitch ban for using a homophobic slur. Maybe they thought there would be questions about Zimmerman’s criticism of Armin van Buuren. “Joel, what did you mean when you said a portion of Armin van Buuren’s 2017 Tomorrowland set was 'dumb as fuck?'" While it's tempting to dig at Zimmerman’s bitching, no, the talking points were harmless:

"I'm interested to know what Joel wants to talk about."


"On average, how long does it take to generate a full 1920x1080 image which is one frame of a Cube V3 visual?" — an imagined approved question

"This piece is running in the Dallas Observer; does Joel know much about Dallas? Any good memories there?"

"I've heard Joel say that he’s been 'run through the EDM mill.' What does the 'EDM mill' mean to Joel?"

Despite no mention of Bieber, this line of questioning wasn’t approved and the interview was scratched. Zimmerman is on a 16-city North America tour with the third edition of his Cube, a 15-foot tall LED Rubik's Cube-like structure. It’s mounted front and center on the stage like a hood ornament on a Cadillac.

Introduced in 2010, this evolved version of the Cube can transition from 45 to 90 degrees and rotates 360 degrees. Deadmau5 plays his hits and operates the Cube from within. Cube V3 is semi-transparent, occasionally revealing the Mau5trap record label owner drinking Coronas and smoking cigs. The Cube is an effort to improve dance music fan experiences and veer from the mundane. It’s not as entertaining as Rabbit In the Moon’s brilliant live show, but it is better than Steve Aoki throwing cakes, and then again, not as good as Eric Prydz’s Holosphere show. It’s all right.

Perhaps Zimmerman will serenade the South Side Ballroom with his brilliant productions, “Right This Second” and “Infra Turbo Pigcart Racer.” Zimmerman’s catalog is loaded with quality, and his ability to produce good tunes is unquestioned. But, no doubt, he regularly spits nonsense and comes off as a “get off my lawn” jerk. His intentions with the Cube are good and his efforts are honorable. But like many misunderstood geniuses, his “my art is brilliant and yours sucks” platform breaks every rule of PLUR: Peace, love, unity, respect — rave culture's mantra.

Based on our conversations, I imagine these are the talking points the team would have preferred (which are better suited for a computer graphics trade magazine):

"Please tell me all about your amazing custom touch designer system."

"Readers want to know, what does the acronym FPS stand for?"

In defense of Armin van Buuren, he doesn’t screen questions ahead of interviews. There’s no way Zimmerman could’ve played Troy Bolton in High School Musical as well as Zac Efron, and "The Biebs" doesn’t perform while seated in a gamer chair.
KEEP THE DALLAS OBSERVER FREE... Since we started the Dallas Observer, it has been defined as the free, independent voice of Dallas, and we'd like to keep it that way. With local media under siege, it's more important than ever for us to rally support behind funding our local journalism. You can help by participating in our "I Support" program, allowing us to keep offering readers access to our incisive coverage of local news, food and culture with no paywalls.
Make a one-time donation today for as little as $1.