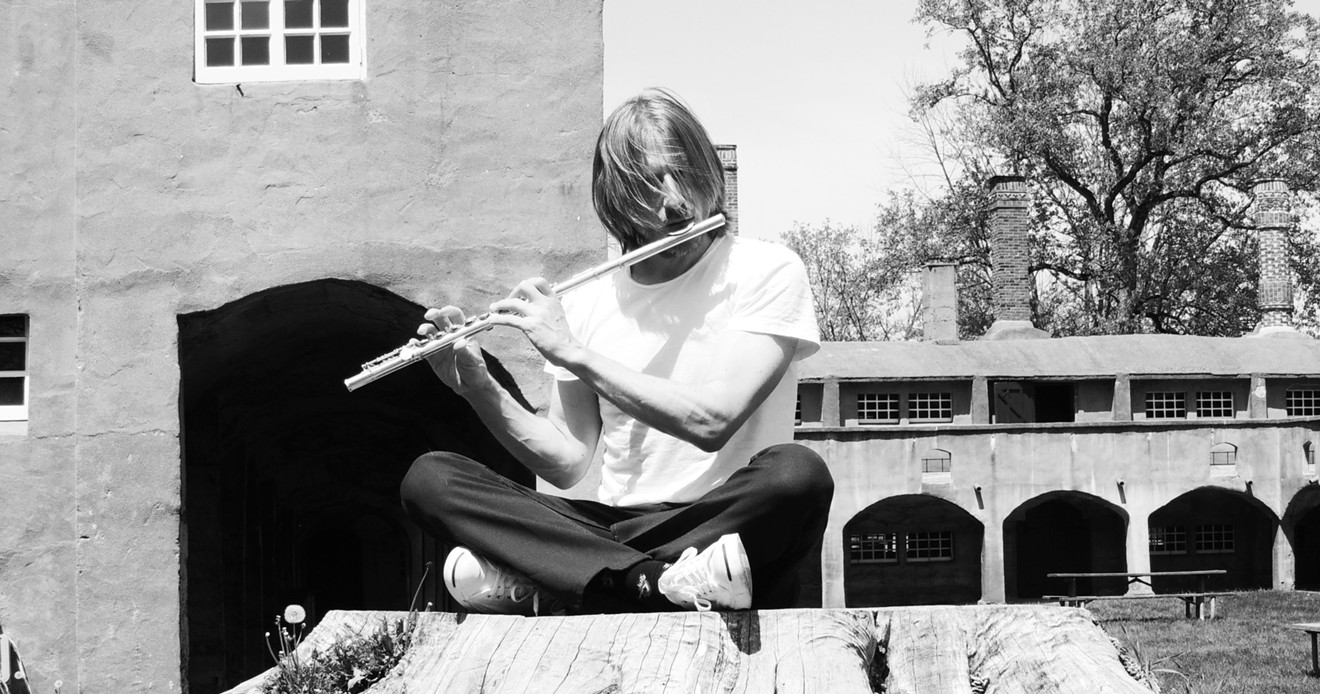 Jesse Chandler from Midlake channeled his late father's childhood on the instrumental A Letter From TreeTops. Larissa Hopwood
Nestled among the endless green pines and rolling peaks of the Adirondack Mountains outside Lake Placid, New York, is a summer camp by the name of Treetops. For more than 100 years, generations of children have been woken up by the gentle nudge of a camp counselor to the rising sun, dewy air and lakeside adventure.

In 1963, a young boy named Dave Chandler and his three sisters attended the camp, becoming instilled with a sense of wonder and a bond with nature that could never be broken. Chandler eventually grew up, had a son named Jesse and died in 2019. But before his death, he got to witness his son's great success as a member of two critically acclaimed bands, playing keyboard with Midlake from Denton and Mercury Rev from Buffalo, New York.

In an attempt to make peace with his father’s passing, Chandler made a record that evokes the sepia-tinted nostalgia of his father’s childhood, starting with the memories of a camp to which he'd never been.

“I’ve been to Lake Placid and the Adirondacks where I grew up,” Chandler says. “I need to make the pilgrimage.”

Chandler’s latest album, A Letter From TreeTops, his first under the moniker Pneumatic Tubes, is a 46-minute instrumental excursion bathed in washes of synthesizer and reeds. Given the tubular nature of Chandler’s instrumental preferences, the project’s title is apt.

The album germinated out of various instrumental improvisations that Chandler recorded as a way of processing his father’s passing in 2019.

“In some ways, I’m releasing my grief process to the world in musical form,” Chandler says. “It’s a feeling that people can relate to. During the pandemic, we’ve all needed music to be there and sooth us. That was the point of recording this album, was to sublimate those feelings of grief and loss.”

Unlike the traditional songwriting process, which includes writing down thoughts and ideas, Chandler just let the music flow when the feelings came to him.

“I set up my instruments on the living room floor and tried to create a very Zen-like atmosphere,” he says. “I had palo santo burning, Christmas lights on, tried to create this atmosphere where everything was soothing and relaxing so I would be comfortable improvising. I was in this semi-trance-like state where I was just sort of processing my dad’s death."

Even once inspiration came, Chandler kept up new traditions during the album-writing process.

"I didn’t know what else to do, so I came up with 25 or 30 little vignettes," he says. "It was sort of like being hypnotized because I don’t really remember doing any of it. This whole process is like that. I’m very into the process of how writers write, painters paint, and figuring out different processes, so this was something I’d never really done before although I did come up studying jazz, always improvising. You have to psych yourself into not thinking about what the finished product is gonna be or it might alter the process. You just have to sort of let it be.”

It's tempting to call the record "ambient," but unlike Brian Eno’s series of sonically subcutaneous explorations, TreeTops is more akin to a film score, with the imagery of the camp, the Catskills and the man who experienced it all being channeled by his son’s hands.

“Part of the thing what drew me to [label] Ghost Box Records is their ethos of half-remembered or misremembered memories of childhood,” Chandler says. “I was imagining a place that obviously meant a lot to my dad growing up. His sisters went there, too, and just imagining what that was like even though I’ve never been there, and I’ve only heard half-remembered reminiscences. I reached out to my aunts as well to get some stories. I think it captures the nostalgia of childhood, these, hazy, yellowed, blurred memories. A part of the record is also based on my own childhood of growing up in the Catskills, near the Adirondacks.”

“In some ways, I’m releasing my grief process to the world in musical form ... It’s a feeling that people can relate to." –Jesse Chandler

While Chandler has freshly released his own record, a solo effort that was nearly entirely his own doing, with supplementary parts by various musicians, his other band Midlake is in the midst of their own release cycle, with their latest album being a primarily collaborative effort between the band’s five members.

Chandler says that being the only person in the room, let alone the only one making the artistic decisions, was a welcomed challenge.

“I‘ve always been really into collaborating, having someone to have ideas to bounce off of,” he says. “Back with Mercury Rev when we recorded Bobbie Gentry's The Delta Sweete Revisited, there was this round robin thing where you could end up on anything. I ended up on a snare drum at one point, or maybe a bass. There was no ego, it was so supportive, and it helped the creative process. Being alone, you don’t have any feedback, only your own ears. In this case, I played it and then I didn’t even think about it.”

Unlike ambient works that beg to be ignored, TreeTops is a kinetic body of songs, philosophically similar to jazz music, which inherently demands attention.

“Jonathan [Donahue] from Mercury Rev would call it ‘Jazz without the notes’ and that stuck with me because I think my jazz background came out over it without trying to play a million notes per second,” Chandler says. “I’ve been looking for venues to play this music, and ideally it would be background music, the kind of music where you’d be drinking coffee and you’d listen for a minute and hear something nice. During the pandemic, I was searching for ‘morning music’ that you could wake up and listen to that wasn’t super aggressive, something you could listen to while you drink coffee, or a crossword — or I guess now it’s Wordle.”

Chandler catches a thought and brings it back, realizing he’s found the perfect descriptor for his creation that otherwise evades description. “Now that I think about it, it’s ‘mourning music’ and ‘morning music,’” he says.
KEEP THE DALLAS OBSERVER FREE... Since we started the Dallas Observer, it has been defined as the free, independent voice of Dallas, and we'd like to keep it that way. With local media under siege, it's more important than ever for us to rally support behind funding our local journalism. You can help by participating in our "I Support" program, allowing us to keep offering readers access to our incisive coverage of local news, food and culture with no paywalls.
Make a one-time donation today for as little as $1.