Our Music Critics' Picks for Best Albums of 2020 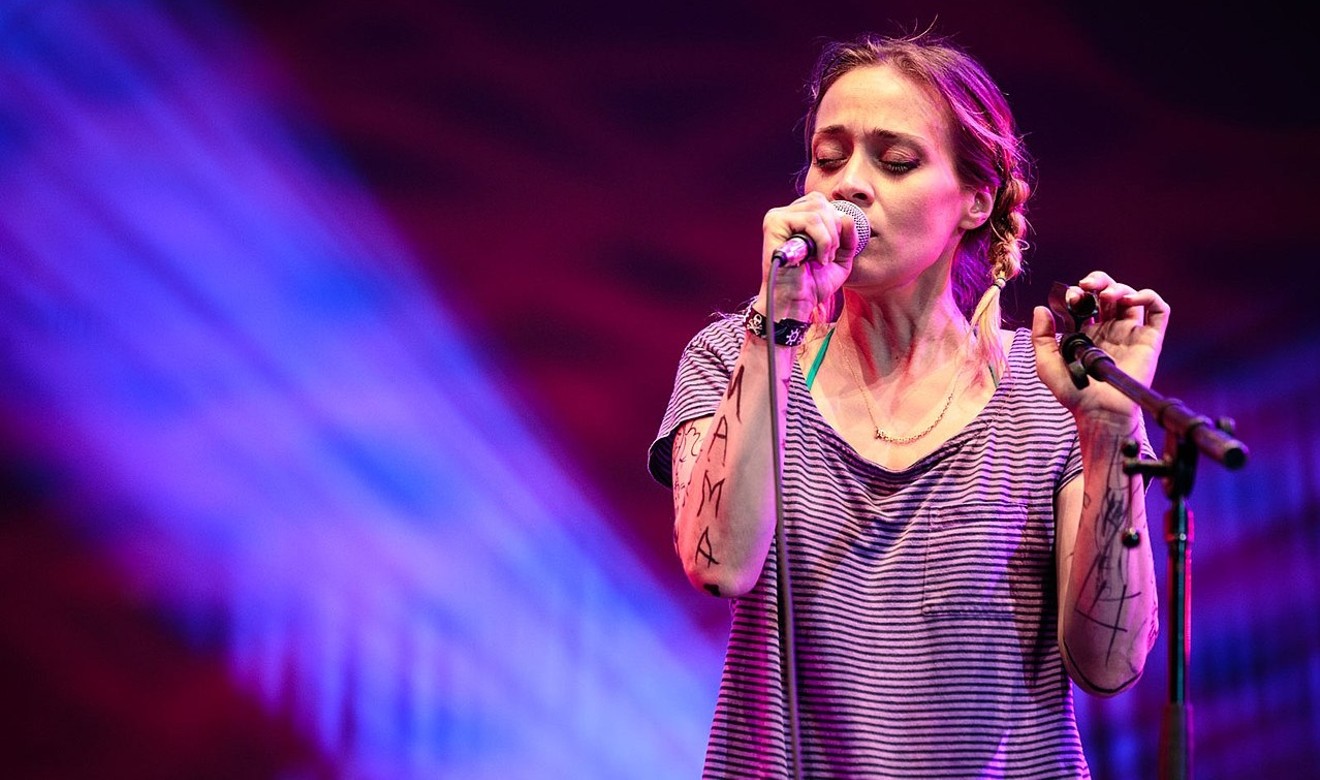 Unsurprisingly, Fiona Apple's Fetch the Bolt Cutters was a favorite with Dallas Observer music critics. Sachyn Mital / Wikimedia Commons
Last year was without question one of the most challenging years for the music industry, and in the absence of live concerts, releases have upheld the connection between artists and music fans.

Bandcamp's First Friday initiative (in which the streaming platform waived its share of revenue to allow artists to keep profits) inspired musicians left without a stage to hunker down in the studio and refocus their attention on those sessions gathering virtual dust on their hard drives. Combined with record labels pushing their regularly scheduled albums and singles, there was no shortage of new music to make a soundtrack to a turbulent year.

Music journalists still had plenty of music to follow, and we asked our music writers for their year-end best album lists.

1. Roger Eno and Brian Eno, Mixing Colours
This has been an uncharacteristically unpredictable and stressful year for many. I found solace listening to far more ambient, electronic and classical albums than in a typical year, and of all the new albums released this year, the fantastic Mixing Colours by the Brothers Eno has been what I've listened to most. The expanded album includes 25 soothing, otherworldly musical meditations that conjure tranquil, serene visions sure to transport even the most unwilling traveler (only 18 tracks on the initial release). As Brian Eno wrote in the liner notes for his seminal genre-defining album Ambient 1: Music For Airports, “Ambient Music is intended to induce calm and a space to think,” and Mixing Colours certainly offers kaleidoscopic tracks that deliver just that.

1. Nick Cave, Idiot Prayer
Recorded at Alexandra Palace for a livestream event last summer, Idiot Prayer by Nick Cave trades his arena-sized storytelling for quiet introspection. Minus his band the Bad Seeds, Cave is alone at a piano delivering stunning renditions and reinventions of some of his most beloved material. Cave invites the listener to an emotionally intimate experience that perfectly balances his typical melancholy with a welcome optimism. Even his most notoriously rowdy songs — such as "Papa Won't Leave You Henry" and "Jubilee Street" —  are made into subtle ballads that eloquently bare his soul.

Top local pick: M'Ress, Poemics
M'Ress followed up last spring's Chip Couture album with a giant artistic leap titled Poemics. Where Chip Couture served as an impressive introduction, Poemics' elevated production and commitment to her vision reveal an artist coming into her own.

Across the 10 astonishingly lush tracks of Poemics, M'Ress taps into the DNA of kosmiche, electro, Italo and synth-wave music without getting confined to any of those genres. With ear-pleasing melodic statements that pleasantly pull you in track after track, the album comes off as a heartfelt artistic statement. Reoccurring themes of cosmic exploration in songs like the playful "Interplanetary Romance," the motorik-pulsed "Ley Lines of the heart" and the introspective album closer "Starry-Eyed Sojurn" suggest an outer space metaphor for inward exploration.

1. Tame Impala, The Slow Rush
It’s almost like he knew what was coming. The Slow Rush, Kevin Parker's fourth full-length record with the Rundgren-esque, psych-pop-rock outfit Tame Impala, is unquestionably about time: its unstoppable march, the dangers of nostalgia, the fear of losing touch, but, most important, the album is about the idea of having so much time on your hands that you don't know what to do with it. During a year in which every person reevaluated the lifestyle choices they became stuck with for more than eight months, the effect of time's relentlessness became painfully obvious. As the year grew longer, slower and somehow started to slip away faster, Parker's lyrics became mantras, some prophetic, some reaffirming: "Eventually terrible memories turn into great ones."

Top local pick: Jonathan Tyler, "Underground Forever" from EP Old Friend
“We need a walk on the beach or a picnic in the park, we need an island getaway 'cause things have gotten pretty dark.” It’s hard to believe Jonathan Tyler wrote “Underground Forever” in 2019, months before the word “pandemic” was on anyone’s mind, because the song captures the hopeful desperation felt by every individual months into quarantine. Tyler wrote the song as an expression of raging media burnout, only for it to also become a defining quarantine anthem. It’s a song of escapism, but one with a self-determined future: This too shall pass, because I’m getting out of here. In anyone else’s hands, such a subject matter runs the risk of being generically feel-good, but in Tyler’s it becomes the voice of a close friend. The song’s persistent, mellow groove is a reassuring hug. “It's all right, feeling uptight, there's enough light, we'll get through the night together — windows down, leaving this town, never get found, going underground forever.”

Top local pick: Record Setter, I Owe You Nothing
I’ve spent about six or so years seeing this band transform, and this record gives you a sense they finally found that “eureka” moment. It was released on Topshelf and received accolades from Stereogum, so I’m excited to say we’ll be seeing more of Record Setter.

Amber Gaudet
Top pick: Sufjan Stevens, The Ascension
Sufjan Stevens' eighth studio album, The Ascension, is an electropop dream featuring mellow, trippy and moody reflections on love, death and disillusionment with American culture. It’s just the exercise in escapism we needed for the hell that was 2020.

Preston Jones
1. The Mavericks, En Español
More than most years, music functioned for many as a kind of aural comfort food and you'd be hard-pressed to find a more satisfying set than the Mavericks' mesmerizing all-Spanish LP.

2. Kathleen Edwards, Total Freedom
For her first full-length in nearly a decade, the Canadian singer-songwriter delivers another cache of searing, sharply observed songs that illuminate and intoxicate.

3. Fleet Foxes, Shore
Dropped during the autumn solstice, this sonic balm — "Can I Believe You" is a glimmering masterpiece — will soothe jangled souls for many seasons to come.

4. Khruangbin and Leon Bridges, Texas Sun EP
Two great Texas talents align for one of the year's most hypnotic, low-key gems — it's the sound of the Lone Star State's absurdly deep talent pool replenishing itself for the 21st century.

Karyna Micaela
1. Phoebe Bridgers, Punisher
Pure art from start to finish, Punisher cinches Phoebe Bridgers’ legacy as a widely influential musician and one of the greatest storytellers of her generation.

4. Lukas Nelson and Promise of the Real, Naked Garden
In Naked Garden, Lukas Nelson proves he’s equipped to carry his father’s torch of multi-genre mastery, even going so far as to musically reference Red Headed Stranger in a reflective interlude in between more rollicking tracks.

Bryson "Boom" Paul
Top pick: 2g Kaash, Mixed Emotions
It's rowdy, authentic and influential from beginning to end. The next-gen trap sound and infectious melodies fit right into the current North Texas hip-hop landscape.
KEEP THE DALLAS OBSERVER FREE... Since we started the Dallas Observer, it has been defined as the free, independent voice of Dallas, and we'd like to keep it that way. With local media under siege, it's more important than ever for us to rally support behind funding our local journalism. You can help by participating in our "I Support" program, allowing us to keep offering readers access to our incisive coverage of local news, food and culture with no paywalls.
Make a one-time donation today for as little as $1.
Wanz Dover
Contact: Wanz Dover