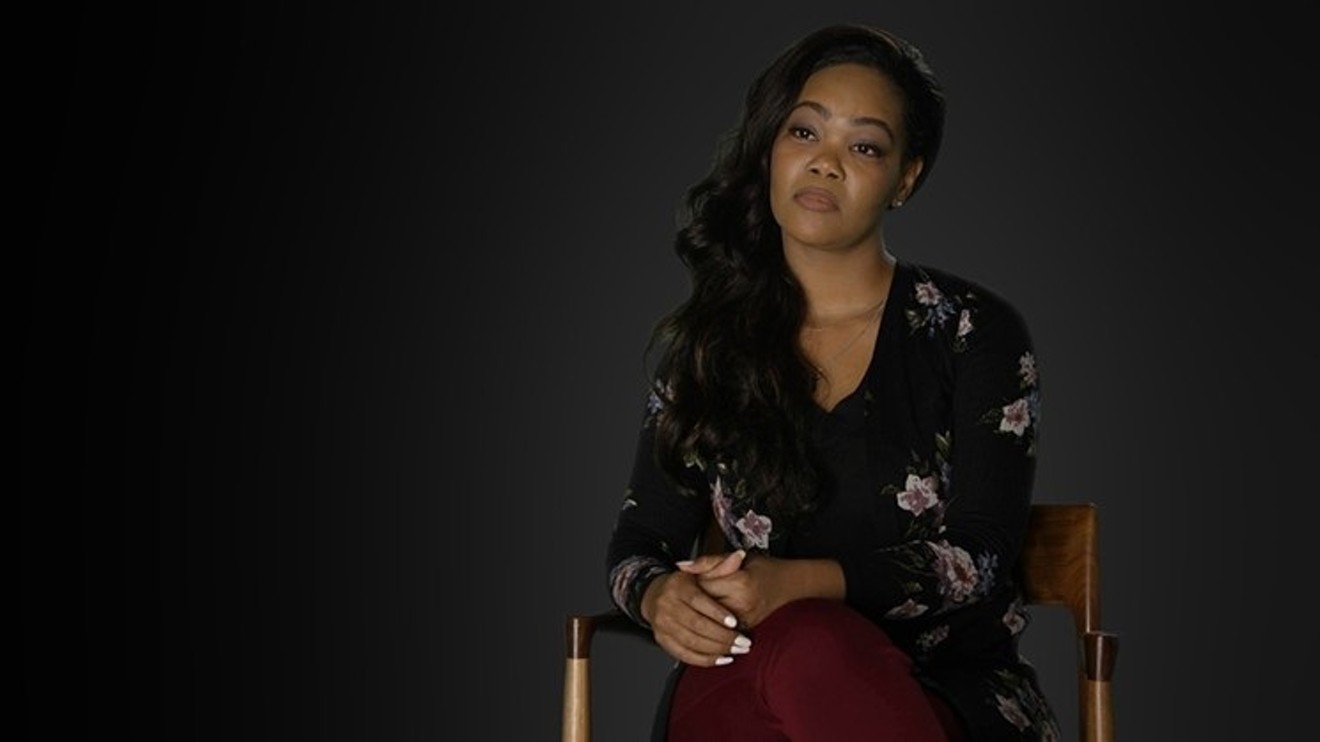 Last January, Lifetime premiered Surviving R. Kelly, a six-part docuseries in which several of the disgraced star's alleged victims came forward, detailing the abuse they say they endured at his hands. Earlier this month, a follow-up called Surviving R. Kelly Part II: The Reckoning premiered on Lifetime and featured some of the same stories, along with more victims coming forward with similar accounts. Jones, a former radio personality at Dallas-based hip-hop station 97.9 The Beat, was in both documentaries.

Jones says she first met Kelly in 2011 at an after-party following one of the singer’s concerts. She moved in with him in November of that year and quickly realized Kelly was not who she thought he was, she says.

“We had our first incident within a couple of weeks of me living there,” Jones recalls of life with Kelly in a phone interview with the Observer. "From that point on, I just went into this survival mode. For me, it was just about trying to make it work. Toward the end of my time there, so much had just built up. I asked myself, ‘How did I get here?’”

Many of the accusations toward Kelly involve lewd sex acts with a minor. In a 2017 BuzzFeed article, several people, including former members of Kelly’s circle, described a “cult” environment in which several women, many of them minors, were held against their will. Jones didn’t describe the environment as a cult and says Kelly never introduced her to (let alone forced her to sleep with) any minors, but she says that many people around Kelly appeared to be under “mind control.”

“The thing that was shocking to me was not just the control that he had over my life, but I realized that his staff was also under control,” Jones says. “They weren't allowed to look me in the eye and speak to me or have any kind of communication whatsoever. I always go back to an incident where I almost fell ... and no one flinched or turned around to even say, ‘Are you OK?’ It was like it didn't happen. Everyone just kept doing what they were doing on their computers. It was just really weird to me that everybody just kind of operated in this robotic way to not get on his bad side.”

In September 2013, Jones finally decided to leave Kelly and return to Dallas. Kelly had bought her a round-trip ticket, expecting her to return.

“My rock bottom was wanting to kill myself or to kill him,” Jones says of Kelly. “In my mind, I was like, ‘OK, I can just tell him that I want to go back to Dallas and take my son school shopping’ because my son was coming back from Italy after living there for eight years. ‘He’ll let me go do that, and he’ll think I’m coming back.’”

Jones packed only enough clothes to look like she’d only be gone for a short while. When she got to the airport, ready to board her flight home, she nearly reconsidered returning to Kelly.

“I got to the airport and I just broke down in the bathroom,” Jones recalls. “I started thinking about how drastically different I looked and how many people were going to be asking me questions about my weight loss. I knew that there were going to be people wondering why I’m back and what happened and I didn’t want to talk about it.”


“My rock bottom was wanting to kill myself or to kill him." — Kitti Jones

Filled with uncertainty, Jones sought a sign from the universe. She decided to call Kelly.

“I said to myself, ‘If he picks the phone up, I’m going to go back,’” Jones recalls. “I kept calling and calling. I would call all the way up until I had to board the flight. He never picked up the phone, and that’s when I knew I had to go back and face the music.”

When she arrived in Dallas, Jones powered off the phone that had been given to her by Kelly when she moved in with him. She used money that Kelly gave her to buy a new phone and changed her number. A few months later, Jones was listening to the radio when she heard promoters talking about Kelly throwing a party at Club Medusa. Jones decided to reach out to Kelly and ask him to bring some of her belongings back. He agreed. When Jones went to Kelly’s bus to retrieve her belongings, Kelly allegedly choked her.

Jones first detailed the abuse she endured at the hands of Kelly in a 2017 article by Rolling Stone. In addition to appearing on both editions of Surviving R. Kelly, she has also gone on to publish two books: I Was Somebody Before This and Heal as you Reveal. To this day, she admits she is not able to watch either docuseries in its entirety, however, she notes that most people didn’t take the accusations against Kelly seriously until a network with a predominately white audience gave Kelly’s alleged victims a platform.

“When it hit Lifetime, we felt like most of our support came from people who didn’t look like us,” Jones says. “There weren’t networks like BET and TVOne coming to ask us anything about our stories. They were looking at us like we were liars and that we were after money. I can’t speak for anyone else, but I had evidence of almost everything that I talked about or else people like Rolling Stone would have never printed my story. They had to fact-check everything I said. I had to turn over pictures, text messages and videos.”

Jones also expressed disappointment in blogs like The Shade Room and Baller Alert.

“I feel like most black bloggers set us up to be humiliated,” Jones says. “They’ll take a section of something that we said that was very important, and put it in a subject line. Then, when you click the comments, people are talking about our hair, they’re calling us liars and talking about whether we’re pretty or not. It’s really nasty and vile. And we don’t have the support of the black community that you think we should have.”

“People know that I did radio here,” Jones says. “When my story came out in 2017 in Rolling Stone and went viral, they did not stop playing the music here in Dallas. These are my old colleagues. But when [Surviving R. Kelly] came out, it made people feel like, ‘Oh, let me jump on this bandwagon now and act like I hate what happened to these people.’”

Jones notes that she did later receive an apology from 97.9 The Beat. But she notes that she was unhappy with how Lifetime handled Surviving R. Kelly Part II: The Reckoning. Particularly she had issue with a portion of the disclaimer that appeared on screen in between commercial breaks during the airing of the docuseries.

“[Kelly’s lawyer] Steve Greenberg said we were lying and using our stories to book panels and make money,” Jones says. “That is so disrespectful. When I'm talking about the incident in graphic detail, I'm reliving that in real-time and I don't think people are sensitive enough to that. I can still smell the cologne that he was wearing that day, what his breath smelled like, what clothes he was wearing; that’s very vivid to me. The reason I wrote my book was because I didn’t want to repeat any of this.”

Although Jones still feels triggered when recounting her time with Kelly, she no longer wants to feel like a victim. She hopes to strengthen other women and help them move forward from abuse.

“There's always someone that reaches out to me that makes me feel like I can't silence myself and be selfish,” Jones says, “because every time I talk about it, there's a group of people that have never heard my story before. That’s my motivation to keep going.”

"If you were representing him and if you were able to see what I saw, by now, you wouldn't be representing him, unless you were wicked as well,” Jones says. “If you had any opportunity to see what I saw and you still are able to defend this person, something is very, very twisted about you.”
KEEP THE DALLAS OBSERVER FREE... Since we started the Dallas Observer, it has been defined as the free, independent voice of Dallas, and we'd like to keep it that way. With local media under siege, it's more important than ever for us to rally support behind funding our local journalism. You can help by participating in our "I Support" program, allowing us to keep offering readers access to our incisive coverage of local news, food and culture with no paywalls.
Make a one-time donation today for as little as $1.