A GoFundMe campaign for a local musician accused of domestic violence has raised nearly $3,000 in two weeks.

In a video posted on Facebook this month, Isaacs says that he was falsely accused by the mother of his 9-month-old son and asks for financial help with his legal fees so he can win custody of his son. Isaacs says he is the one who suffered abuse.


"Extremely false allegations have risen from the hurt feelings of a woman who is out for revenge because of a hard decision I had to make to separate from the abuse, manipulation and control of a mentally unstable person." — Scotty Isaacs

"I've recently been under the gun of false accusation, a victim of severe domestic abuse, both physical and mental, as well horrible harassment and slander on social media," Isaacs says in the video, his words presented as scrolling text with swelling music in the background.

Isaacs says he has documented the abuse with audio and video recordings over the last year and that his Dec. 12 arrest occurred after he called the police for help. He claims his ex-girlfriend became upset because of his decision to break up with her and that her wounds documented by police when they arrived were a result of self-harm.

"Extremely false allegations have risen from the hurt feelings of a woman who is out for revenge because of a hard decision I had to make to separate from the abuse, manipulation and control of a mentally unstable person," Isaacs says.

Krystin Elize, Isaacs' ex-girlfriend and mother of his son, tells a different story. She says she and Isaacs began dating in May 2016. Elize moved to Dallas from San Diego to get her cosmetology degree at Toni & Guy and met Isaacs at the Free Man. Two months later, they found out she was pregnant.

"Scotty was so excited," she tells the Observer, through tears. "I was very scared. He promised me a lot of things."

She says their relationship was good at first, but Isaacs began to abuse her about four months into her pregnancy. She says she has provided the Dallas County district attorney with hospital bills, text messages and several videos to back up her allegations.

Elize says that on Oct. 16, she ended the relationship and left with her son.

"I managed to stay gone for about a month and a half until I just didn’t have anywhere to go anymore," she says. "So instead of going to a shelter, Scotty promised me it would be OK if I stayed downstairs because he didn't want our son in a shelter."

Elize says that she and Isaacs were co-habitating but not dating when the arrest occurred Dec. 12. She recalls watching a movie when Isaacs volunteered to go to a gas station for snacks around 1:45 a.m. Elize claims Isaacs didn't return until 8 a.m., and when he did, he was "completely drunk and belligerent."

When she attempted to leave with her son, Elize says, Isaacs wouldn't let her, so she called the police.

"He blocked the door with his body; he was grabbing my wrists," she says.

Police officers arrived but did not make any arrests, Elize says, and she made arrangements to move with her son to a domestic violence shelter. Isaacs' arrest occurred after Elize returned to the house later in the day to fetch her clothes, she says.

"I went into the house, and as soon as you walk into the house, there's a dining room table. Scotty took the chair and flung it across the room," Elize claims. "I don’t know if he was specifically trying to hit me or he was just angry. Either way, it hit me across the leg, and I fell.

"He took his hand — I don’t know if it was his hand or his fist — but he slammed my sunglasses into my face, causing lacerations," she continues. "He threw hangers at me. It was just chaos." 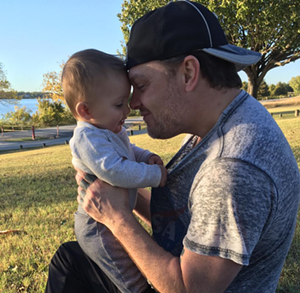 Scotty Isaacs with his infant son.
GoFundMe
While Elize was upstairs gathering her clothes, she says, Isaacs took her son from the car, hid her phone and refused to let her leave with him.

"I went outside, and I started screaming," Elize says. "I was begging people to call the cops. Somebody finally called the cops. I don’t know if Scotty did; I don’t know if the neighbors did. I don’t know who it was. It wasn’t me; I didn’t have my phone. But I was outside, and that’s where the cops met me. The officers came, and after several hours of hearing both sides, Scotty was arrested."

The next court date is set for Jan. 24. Elize says she's been advised to seek a two-year restraining order. She says her goal is ultimately to find a way to co-parent successfully.

"Despite everything, I want my son to have a relationship with his father."

Isaacs declined to speak at length for this story.

"I talked to my attorney and they don't want me to do any interviews while the case is opened," he said in a Facebook message. "After everything gets dismissed I'd love to talk with you about it all. This sort of thing is happening far too often and I wasn't aware until it happened to me. Awareness needs to be raised regarding this issue."

As for Isaacs' claims that he is the victim and has evidence to prove it, Elize says that she wouldn't have custody of her son if that were the case.

"The district attorney is calling it a retaliating case because Scotty didn’t start complaining about me or saying that I was falsely accusing him until after his arrest on Dec. 12," she says. "I’d already had custody of my son for almost two months at that point, and so making any allegations of child abuse or drug abuse or being mentally unstable or any of the other names I’ve been called during this period of time, it didn’t start until he got arrested."